Why is it becoming criminal to send your kids outside to play? 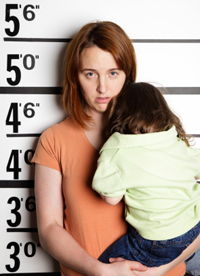 In some parts, sending your kids outside to play has become a criminal activity. And we're not being melodramatic -- we mean that literally. Over the last few months, three different mothers have been arrested for allowing their children to navigate The Great Outdoors beyond the confines of their homes.

Most recently, a Tammy Cooper in La Porte, Texas was thrown in jail for "child endangerment" after a neighbor called police to report that her children were playing outside on scooters unsupervised. That the neighbor's accusation was actually incorrect -- Tammy was keeping an eye on them from a lawn chair on the sidewalk -- is even beside the point. Tammy and her six- and nine-year-old children live on a cul-de-sac, which should be a perfectly acceptable environment for a couple hours of loosely supervised outdoor play. Though the charges against Tammy were dropped, the ordeal has cost her family over $7,000 in legal fees.

In July, Betty Abena Anane in Manchester, Connecticut was charged with "risk of injury to a minor" after police say she allowed her seven- and 11-year old children to walk a few blocks to buy pizza unsupervised. As one commenter on Free Range Kids put it, "It’s a 10 minute walk on a stunningly ordinary residential street." Here, Google maps shows the route they took: 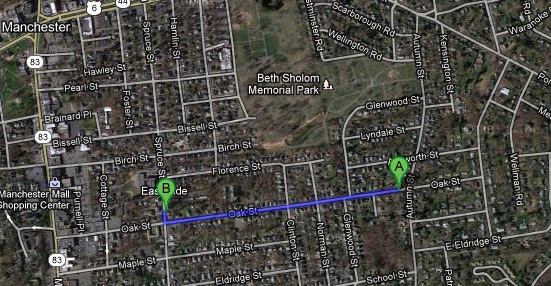 Outraged yet? Hold on, there's more. In June, April Lawson in Johnson City, Tennessee sent her five- and eight-year-old children to play at a playground a block and a half away from her house. When she sent someone to check on them an hour later, she learned they were not at the playground and immediately called 911. It turned out the kids had left the playground and gone to play at a nearby friend's house, arriving home right before the police arrived.

So after a harmless mix-up, everything was OK, right? Not quite. April spent the night in jail and was booked with felony child abuse and neglect charges.

The basic plot of all three stories is this: Mom trusts her kids to roam around for a few blocks outside. Mom trusts her neighbors to help keep a collective eye on them. Mom gets thrown in jail. Are these the lessons about 'right' and 'wrong' we want our law enforcement officials teaching our kids?