Are your kids allowed to play outside unsupervised?

Mom says, "Go outside and play." Kids go outside and play. It used to be that simple. But for a number of reasons, few parents these days feel comfortable letting their children roam the neighborhood without keeping a watchful eye.

Danielle Smith, a blogger on strollerderby, asks in the video at right, "Do you let your kids play outside alone?" Though she admits it's unlikely, she worries about her kids getting abducted by a stranger and simply can't bear the thought of anything happening to them on her watch.

Many parents are equally reluctuctant to send their kids outside unsupervised -- so many, in fact, that our neighborhood streets are now eerily quiet, void of the shouts and screams of playing children. And that's precisely the problem. In the "good old days," kids weren't playing "alone." They were playing with all the other neighborhood kids.

After all, playing alone is boring. And more dangerous. In the extremeley unlikely event that a child abductor were to be perusing your neighborhood, he or she would be far more likely to prey on your children if they were alone.

We strongly believe that children need time for free, unstructured, unsupervised play -- but they also need other children to play with. So the question of letting kids play unsupervised is one we need to pose not only to individual parents, but also at the neighborhood level.

Of course, getting a whole neighborhood on board with unsupervised outdoor play is no easy task. (You can read about one father's worthy efforts here.) But since April is officially "Get Outside Month," there's no better time to start.

>> See our "Get Outside" board on Pinterest for ideas and inspiration. 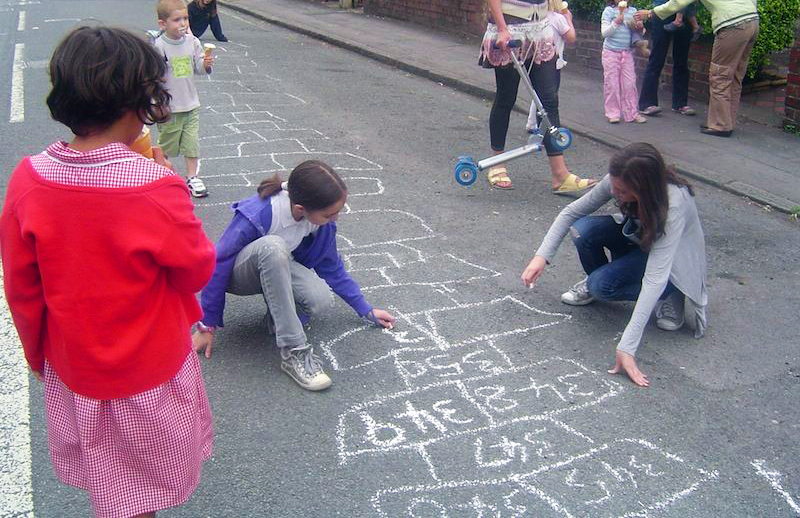 Photo from PlayingOut.net, an organization dedicated to activating street play in your neighborhood.