StoriesSpaces to play. Sparks for change.

Why KABOOM! evolved in order to more boldly and clearly reflect our commitment to playspace equity.

What is playspace equity?

When we achieve playspace equity, every kid, regardless of race, zip code and family income, will have access to high-quality playspaces that address the unique history and needs of each community. In doing so, we must amplify the strength of communities and fearlessly call out the historical and systemic racism that has created the conditions we all want to change. Outside Looking In Five young girls and one boy look through a fence at a park in Mobile, Alabama in 1956. © The Gordon Parks Foundation

Playspace equity is connected to the greater struggle for racial equity.

Structural racism is at the center of playspace inequity. It has been a driving force of the decades of disinvestment in public spaces that we’re working to address. If you want to dive in deeper, I recommend that you read “Race, Riots, and Rollercoasters” by Victoria Wolcott. Her book focuses primarily on amusement parks and swimming pools, but it also touches on parks and playgrounds. Here’s how Professor Wolcott ends her book.

Full access to public accommodations— the occupation of public space— was central to the freedom struggle because it is itself a central freedom. The African American mothers who demanded equality for their young children understood this. So did young student activists, black and white, and the lawyers who advocated for them. Black teenagers hoping to ride a roller coaster or jump in a pool also understood recreation as an expression of freedom. It is past time twenty-first-century Americans understood the connection between freedom and fun.

There’s been a movement made up of established civil rights leaders and institutions, everyday people and even kids themselves.

And KABOOM! is proud to be part of this movement. A note from Kendal, describing why her school should have a playground.

I don’t think for a second that kids don’t see this unfairness and inequity. We often receive letters from students explaining why they need a playground. In one recent letter, a student named Kendal wrote, “And it feels kinda weird because the other schools have playgrounds.” I agree with Kendal that it’s weird, but I think Kendal was too polite.

When you support KABOOM! you honor not just the legacy of Martin Luther King, Jr. and other civil rights visionaries, but also the legacy of every kid who refused to be denied access to a great place to play.

Join us as we prioritize equity, amplify the power of the communities we work with, and ensure that we bring the best quality, innovative playspaces to the kids, families and communities that have been cut off from opportunity.

So, let’s get to it. Let’s show all kids, regardless of the color of their skin, that they matter.

For kids. For communities. For good. 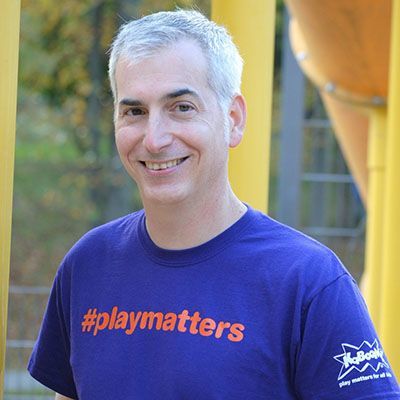 James Siegal served as KABOOM! CEO from 2016 to 2021, and is now a Senior Fellow. He is a graduate of Princeton University and Harvard Law School. James and his wife enjoy spending time on the playground with their three young girls.

Why Playgrounds Matter In Rural America

Now is the Time to Invest in the Infrastructure of Childhood