Stories of ImpactBeginnings of KABOOM!

KABOOM! was founded to make it possible for all kids – no matter their zip code or skin color – to have the same opportunity to play.

In 1995, four year old Iesha and her younger brother Clendon tragically died after being trapped in an abandoned car on a hot summer day because they couldn’t find a safe place to play in their Washington D.C. neighborhood.

Their neighborhood had no playground, and the nearest public recreation center was too far for them to walk alone. So, when they discovered an old abandoned car, they climbed inside to invent their own game. Due to faulty locks, they got trapped and suffocated. For many around the country, it was a heart-wrenching wake-up call of just how desperately kids need safe places to play in disinvested communities.

Our founder, Darell Hammond, was struck by the heart-wrenching realization of just how urgently these kids needed play — it was literally a matter of life and death. 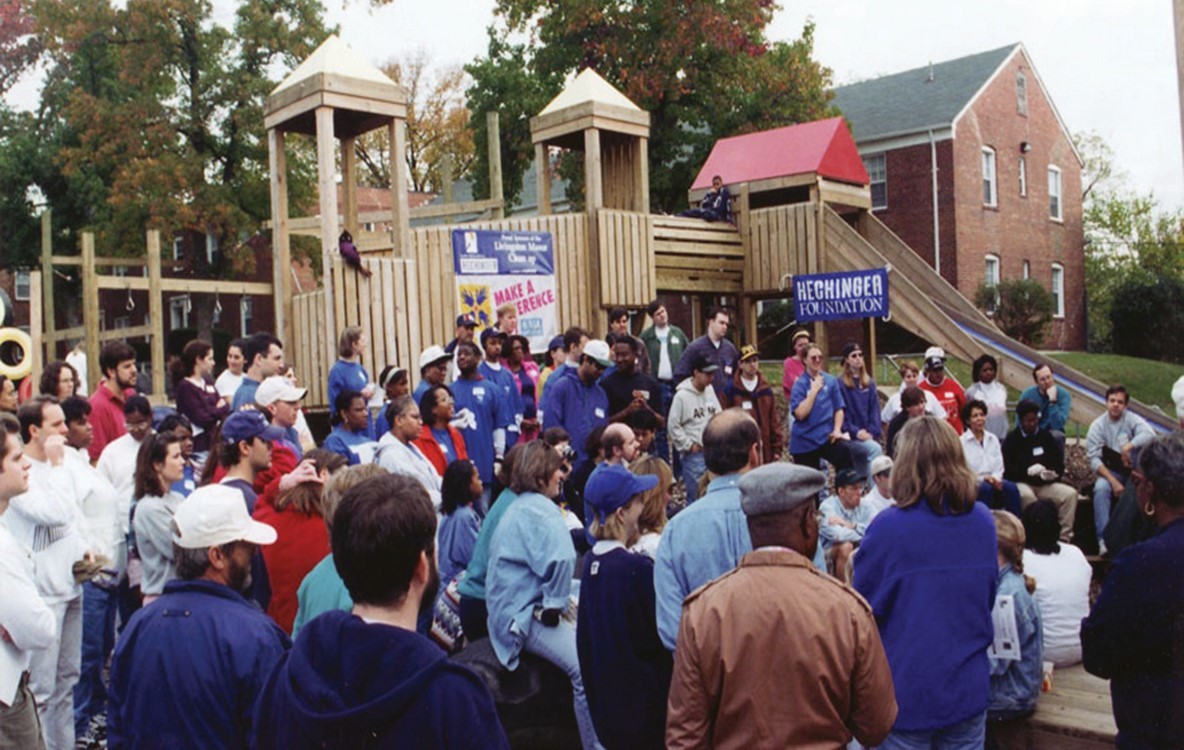 Volunteers gather at the playground Darell Hammond built in response to the tragedy, taken on October 18, 1995

Darell was motivated to act — not to create an organization, but to solve a specific problem working in partnership with a specific community to meet the needs of its kids.

The following is an excerpt from Darell Hammond’s book KABOOM!: How One Man Built a Movement to Save Play.

Construction started on October 18, 1995. The process took four days, and it rained the first three. Despite the rain, on each of the first three days, we got about a hundred volunteers. A few of those nights we were there until 10 or 11 at night, working in front of the headlights of our cars. Sometimes we were trying to make up ground so we’d be ready the following morning, and other times we were fixing mistakes.

And little by little, as if through sheer will, the playground went up. On the fourth and final day we had close to 500 volunteers, including hundreds from Youth Service America’s conference participants. Some local residents of the housing complex served sandwiches and orange slices to workers; others opened their homes to let people use the bathroom.

The finished product included 500 tires, nine steering wheels, and 8,500 feet of lumber. The kids were overjoyed — they were bouncing up and down, laughing and giggling. We tried to keep them off the playground, because we’d painted eyes and ears on the tires, and the paint hadn’t dried yet. But after all the buildup, it was impossible. The kids were too excited, and they swarmed all over it.

That’s the story of the first KABOOM! playground. We’ve been building playgrounds in partnership with under-resourced or disinvested communities all across America ever since.

KABOOM! was founded to make it possible for every kid – no matter their zip code or skin color – to have the same opportunity to play. Since our founding in 1996, we have worked alongside communities to create great places to play in neighborhoods beset by disinvestment. We know the opportunity for a high-quality, safe place to play is too often determined by where kids live.

Today, KABOOM! continues to address the inadequacies in play infrastructure and bring people together in cities across the country to make sure kids grow up happy, healthy and ready for life.

A safe place to play isn’t a nice-to-have; it’s a necessity.

Detroit Parks and Recreation on Centering Equity in Crisis and Recovery

A Q&A with Meagan Elliott, Chief Parks Planner for the City of Detroit about creating playspace equity during the COVID-19 pandemic.

Powered by KABOOM! and Target, the Play Everywhere Tour traveled to Atlanta, Dallas, Houston and Miami to bring kids and families together for a fun-filled day of play.

COVID-19 has layered new challenges on to youth already forced to navigate decades of structural disinvestment. Kids and teens are losing their social connections and the roadmap for their future.