For many families, going out to play is synonymous with "going to the park." Yet, the reality is that parks— or at least the traditional idea of a neighborhood park with an enclosed playground— cannot by itself address the play deficit or integrate play into everyday routines for all ages and abilities. From a Play Everywhere perspective, bringing new opportunities to parks, open spaces and other public spaces requires a certain resourcefulness and ability to "think small" and see opportunities in overlooked spaces. It means activating and reclaiming underutilized and blighted spaces for playful uses, while putting kids' imprints on spaces that, until now, have excluded them. It requires embracing public spaces in all their variety—large, small, tiny and linear; green and natural, hardscaped and constructed and publicly- and privately-owned. Finally, and crucially, it means thinking about play as a network of public spaces, rather than a single destination in a single park. 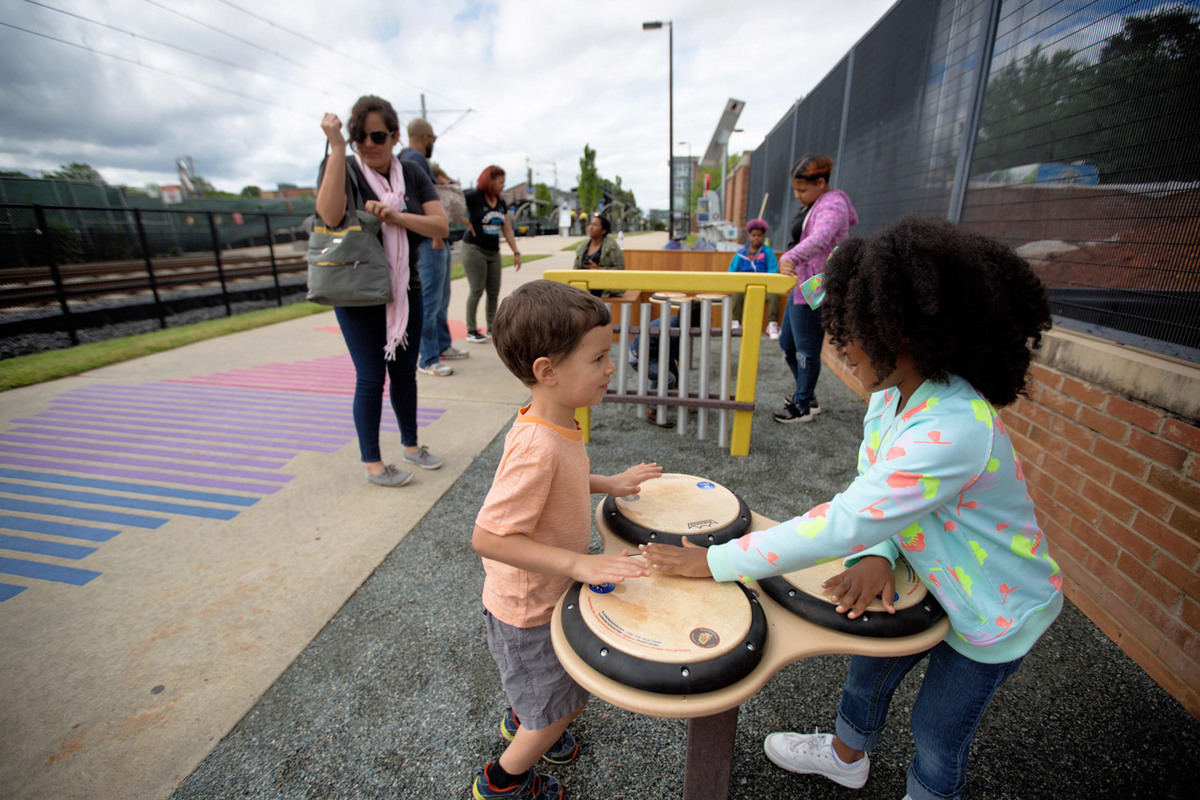 Kids make music together at Rail Trail Symphony, an installation along the Charlotte Rail Trail in Charlotte, NC.

Fostering Play Everywhere in parks, trails and public spaces entails thinking about play at multiple scales and in a variety of contexts. This includes:

These are the larger, more established, open urban spaces. Some may already serve as places to play. Some may offer ample open space, yet lack adequate play facilities. Others may be established public spaces and open spaces, but are not thought of as places for kids and families: spaces for passing through, but not places for stopping, lingering and playing. Cities can take advantage of these spaces by:

Meaningful play can fit into surprisingly tight spaces. The built environment is full of pocket parks or other small urban spaces that may not be large enough for a playground, yet offer many playful possibilities. Whether it's a playable or climbable sculpture, a mural or hopscotch trail, play can bring new life to overlooked or neglected public spaces. It can also bring new pocket parks to life in unlikely places. In the built-out urban environment, where park land is limited or inaccessible to many neighborhoods, integrating play into smaller public spaces can be a powerful and impactful strategy. By bringing play closer to where kids and families live and conduct their daily activities, it becomes more equitable and convenient. Specific opportunities include:

Habitot Children's Museum in Berkley, CA transformed a 3,600 square foot parking lot into a giant sandbox that attracted over 1,700 kids in seven days.

In cities across the country and around the world, a new form of public space has taken root: the privately-owned public space (sometimes referred to as "POPs"). These are public spaces that are privately owned, but are legally required to be publicly-accessible. Some of these spaces may be the plazas and courtyards that surround buildings on private property. Others may be indistinguishable in design and function from public parks or plazas, but are managed, operated and maintained by private entities using private funds. All such spaces may be subject to a different set of rules and regulations regarding what can and cannot occur in the space. Depending on the owner and associated land uses, this can present challenges to incorporating play if it is viewed as incompatible with existing uses and tenants on the site. On the upside, privately-owned public spaces offer unique opportunities. Property owners and managers may have the resources to build or program play; in fact, they may want to attract more families as customers to stores or restaurants or they may want to make residential properties appealing to families. Specific opportunities, in collaboration with property owners and managers, include:

More design guides
Multi-family housing Residential communities, including multi-family complexes that many kids call home, offer untapped spaces that create opportunities for convenient play.
Civic spaces Providing visible play areas is an easy and available opportunity for kids and families to feel some ownership and sense of belonging in civic institutions.
Commercial spaces The many places where commercial activities occur and kids are forced to wait include underutilized spaces that can be repurposed for play.