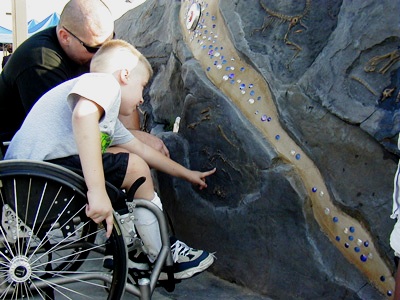 Shane's Inspiration is more than just the first universally accessible playground in the Western United States. In the last decade it has expanded to become an international non-profit organization dedicated to improving the lives of children with disabilities. That's a pretty big accomplishment for two L.A. actresses and friends who knew nothing about planning or building a playground until they were inspired by a short but beloved life.

In 1997, Shane Alexander Williams was born with a degenerative spinal condition, and survived only a few weeks. Realizing that her son would have needed a fully accessible playspace to support his physical challenges, Catherine Curry-Willams and family friend Tiffany Harris turned grief into action and rallied the citizens of Los Angeles to build Shane's Inspiration. The two-acre playground, officially revealed in September 2000, features poured-in-place rubber surfacing, upper-body strengthening structures, wheelchair-height sand tables, accessible swings, and other elements that support inclusive play for all children.

The funny thing is, Shane's Inspiration didn't intend to become an international organization. They started as just a group of parents, friends, and caring community members joined together to build an amazing playground in memory of a child. But then the calls started pouring in, mostly from families who wanted a space like this in their community. Another universally accessible playground, Aidan's Place, was soon constructed in Westwood, CA, but the requests kept coming. Having learned how to successfully build a playground of this caliber from the ground up, the Shane's Inspiration team put their experience to good use, and now assists others throughout the process. 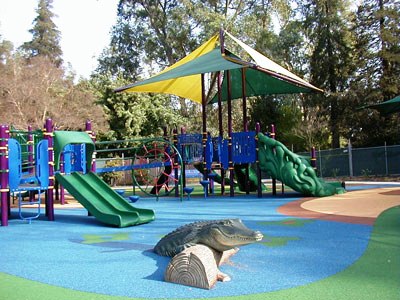 As of April 2007 - Shane's Inspiration's 10-year anniversary - the team has proudly seen the opening day of 12 universally accessible playgrounds that they helped to develop, and 6 more are expected by the end of the year. While Shane's Inspiration and Aidan's Place were conceptualized, designed, and fundraised for entirely by the Shane's Inspiration crew, the others came about by community groups, schools, and even the Los Angeles Zoo (picture at left) approaching the organization to take part in their Catalyst Program.

The services offered through this program provide comprehensive assistance in accessible playground design and development, guiding communities from conception to completion. In addition to the playgrounds already being enjoyed, there are more than 70 playgrounds still in their planning stages, receiving guidance in design, fundraising, project management, and programming. Participants are provided with grant templates, tips to gain political support for their projects, and other tried-and-true structures, "so they don't have to reinvent the wheel," in the words of co-founder Harris. Who are the people taking advantage of this assistance? Summed up simply: "everyone from moms to municipalities." And they're everywhere from Virginia to Hawaii, Ireland to Cambodia. Harris stresses to all of those interested in building a universally accessible playground that "any budget can do it - from $60,000 at a school to a multimillion dollar park."

While the creation of accessible play environments is rewarding and important, the true vision of Shane's Inspiration is much larger. They aim to eliminate bias toward children with disabilities through accessible play, and work toward this goal through education and outreach programs that take place in the classroom and on the playground. In their opinion, building the accessible playspace is just the first step - you have to get kids of all abilities playing on it together to be truly successful. 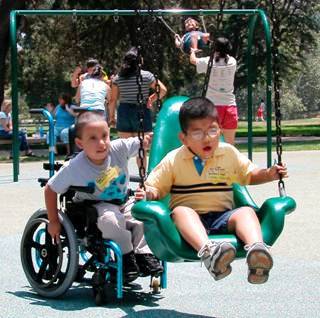 Try to imagine being a child with buck teeth, a lisp, or a limp. Would you want to face a classroom full of elementary school kids? How about if you were a child with a severe disability? Kids can be cruel, but the folks at Shane's Inspiration think they just need a little education to understand that "different" is not bad. So, they go into 4th through 8th grade general education classrooms to hold discussions about disabilities. Students share their thoughts and feeling, fears and beliefs about the "different kids," and many negative myths are busted by the Shane's Inspiration team. The following week, the kids are bussed to the playground and each is introduced to a child with a disability. For two hours, these pairs of students play together, talk, have wheelchair races, laugh, and break down the fear of differences previously revealed.

A week later, the team returns to visit the typically developing kids and talk about their experiences. The new perspectives are often amazing. One little boy wrote in his post-playground thank you letter to Shane's Inspiration, "Before I went to this park I thought that someone in a wheelchair is scary and weird but now that I have gone I found out there is no difference." The program has been very well received by students and teachers alike and will reach over 1,200 children this year alone. The "Together We Are Able" education program is currently being developed to full curriculum for implementation in the fall.

A club for everyone 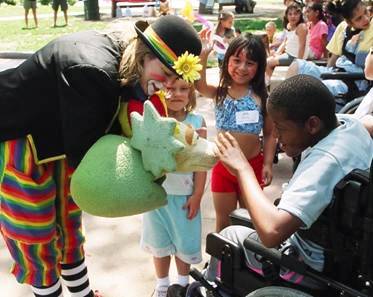 Where do children of all abilities go when they want to play together and make friends while enjoying the playground? Shane's Club, of course. Once a month for the last five years, these children and their families have gathered for arts and crafts, face painting, and entertainment at Shane's Club, planned by the Shane's Inspiration team and sponsored by various organizations. The club holds free monthly playdates at various Shane's Inspiration playgrounds, allowing children to have fun and learn about each other while parents share advice and experiences. While attending Shane's Club, children of differing abilities are "buddied up" to encourage greater socialization and understanding amongst them. Shane's Inspiration is now working with communities as far away as Bangalore, India to replicate this powerful family program.

"If you build it, they will not come" 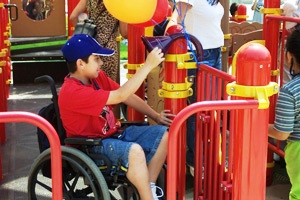 This is one of the stranger things that groups interested in building a universally accessible playground hear from Harris. She's not being discouraging; she's trying to open people's eyes to the reality that just because an accessible playground is unveiled doesn't mean that kids with disabilities will start flocking to it. But why is that? For some families, it may be a wariness of any place labeled "accessible"- often this means a single disappointing ramp, not a fully inclusive play experience. For others, simply getting their children and all of their accoutrements to the playground is a feat too large to handle. Shane's Inspiration overcomes these barriers by providing outreach and transportation to families and schools that serve children with disabilities. Each year, they arrange accessible transportation to the playgrounds for over 2,500 children with disabilities and their families. The service is free, thanks in part to support by the Los Angeles City Council and County Board of Supervisors, Laidlaw Transit Services, and private donors. Once families know that the playground is truly accessible and they have a way to get there, attendance increases and Shane's Inspiration is one step closer to realizing their vision. 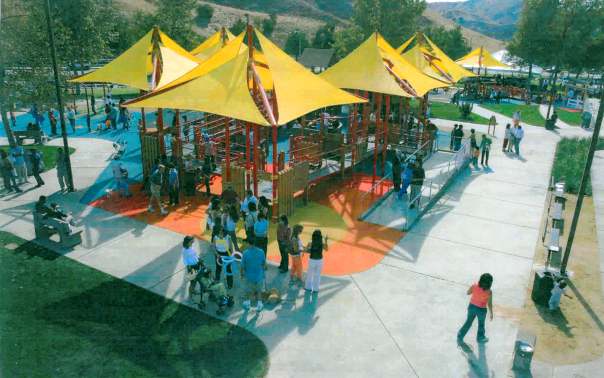 In October 2006, Brandon's Village in Calabasas, CA (pictured at right) celebrated their first day of inclusive play with a ribbon cutting, entertainment, and fun activities for all children. Now the Shane's Inspiration team is looking forward to their next exciting opening day, coming in June 2007 when the new universally accessible playground at Los Angeles Orthopaedic Hospital opens to the public. Yes, that's right, to the general public. The hospital is located smack in the middle of South Central Los Angeles, where safe playspaces are few and far between. So members of the hospital's Foundation, overseeing the project, decided to open their soon-to-be playground to all of the city's children. The playground is expected to delight over 100,000 visiting children a year, including the hospital's 55,000 annual outpatient clients.

So how many children has Shane's Inspiration impacted? It's hard to tell, with so many playgrounds currently open and more in the works. But one thing is for sure. Southern California, and now the rest of world, is a better place to play because of the hard work of Shane's Inspiration founders, advisory board of families and professionals, and all those community members near and far who approach them with a vision of access and equality.