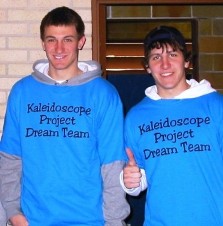 College freshman are excited, perhaps apprehensive, and definitely curious about what their first days and weeks of higher education will hold. Syllabi lay out a world of quizzes and research papers, deadlines and rough drafts. But for those who have opted for Rona Karasik or Phyllis Greenberg's version of St. Cloud State University's "Democratic Citizenship" general education course, the tasks that lay ahead are a little different. The general goal of the "Democratic Citizenship" University requirement is to teach students about democracy and issues of civic participation. But various professors and departments who offer the course go about teaching these concepts differently, and Karasik and Greenberg have their own unique spin - their classes have and will to continue to plan, design, maintain, and promote a universally accessible neighborhood playground. More exciting than economics? Definitely. But make no mistake that these students are learning plenty in their pursuits.

Everything I need to know I learned on the playground 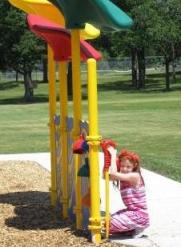 Dr. Karasik is Director of St. Cloud State's Gerontology Program and a professor for various courses in the Department of Community Studies. Involved in service-learning projects within the gerontology program, she began to ponder how this kind of education could be incorporated into one of the undergraduate courses she taught –CMTY 195, "Community and Democratic Citizenship." What she wasn't sure of yet was what kind of project could connect students to their neighbors, teach them about good citizenship, and provide a model of sustainability within the community. Luckily, Karasik happened to visited Jonathan's Dream around the same time as these ideas were budding. At this barrier-free playground she witnessed community members of all ages and abilities playing side by side, and thought, "A place to play for a one-year-old, four-year-old, and ninety-four-year-old to enjoy together…what a great idea!"

She considered the four service-learning goals she set out for her class: provide students with face to face contact with communities and their participants; introduce students to the needs and concerns of communities; provide students with interaction with community agencies and/or governing bodies; and provide students with the opportunity to develop civic responsibility/citizen participation skills. Building and maintaining a playground could certainly achieve these objectives, as well as teach students a variety of management and marketing skills that can help them in the future. Not to mention that playgrounds are fun and universally appealing, allowing for students and community members from different backgrounds, perspectives, and generations to meet and work together on common ground. Building an accessible playground also creates interactions with neighbors of varying abilities, further broadening learning experiences and increasing the positive impact on the community. Karasik took her idea to colleagues, and in 2001 development of "Kaleidoscope: A Playground at Wilson Park" began.

The goal of the Kaleidoscope service-learning project is "to research, develop, and fund a fully integrated, universally accessible, and developmentally appropriate playground to serve children of all abilities in the local and surrounding community." Sounds like a piece of cake, right? When the first class of playground-planners dove into the project, the task was more than a little daunting. The students broke into groups of their choosing, each in charge of a different aspect of the project, such as grant-writing, publicity, and fund-raising. They surveyed children and adults in the community to find out what elements were desired in a playground, and contacts were established with groups such as the St. Cloud Parks & Recreation Board, who maintains Wilson Park, and the East Side Boosters. A perfect fit for their project, the Boosters promote East Side development and were very interested in the idea of a barrier-free playground. 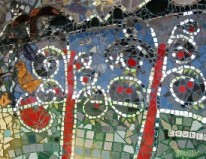 Approximately 30 students participate in the course every semester, which means that over 600 young adults have been involved over the last six years, not including their friends who volunteer their time to the project. What they've managed to accomplish so far, especially considering that each semester a new group of students arrives and has to learn everything about Kaleidoscope from scratch, is amazing. The first piece of equipment –the fun and accessible Sway Fun glider –was installed in the spring of 2005, along with the Community Donor Board. More structures have been added over time, and a ribbon cutting was held in June, 2007 after the addition of several pieces. Kaleidoscope is still waiting for enough funds to install permanent accessible surfacing, however, and currently wood chips are used. This temporary inconvenience is offset by access ramps from the sidewalk to play structures, as well as multiple play components that are accessible from the paved walkway. Also included is the Kaleidoscope Artscape Collaboration, a community produced mosaic mural designed and installed under the direction of a local artist. Plenty of children and senior citizens turned out to help with the mural, and other community members donated materials. The East Side Boosters stepped in to pay for the artist's assistance so that grant money received could be used to purchase more playground equipment. Not only is the mosaic mural beautiful, but this certainly sounds like the kind of collaboration this course was aiming for.

Not your typical midterm

How does one go about grading students in their service-learning participation? This is a class, after all, and 'citizenship' doesn't exactly lend itself to standardized testing like math or other subjects. "You have to grade the learning, not the service," says Karasik. For instance, students are evaluated on how well they integrate reading material on citizenship into class discussions, not on how much money the last fundraiser brought in. They are required to keep a log of their hours spent working on the playground, though, as well as complete a mid-semester reflection paper on the challenges and barriers of working in their group. A minor snafu or even total dysfunction within a group is not considered a bad thing: "they can often learn more from failure" notes Karasik.

Students are also responsible for organizing and operating biannual Spring & Fall Family Fun Festivals held to raise awareness about Kaleidoscope. Community members of all ages and abilities are invited to the playground where food contributed by local businesses is sold, free crafts & games are conducted, and donations for future Kaleidoscope improvement and maintenance are collected. Students mingle and talk to people about the playground –and they need to know enough about the entire project to converse, not just the portions completed by their group. According to Karasik, "In service-learning, the community tells you what they need. But the students have to figure out how to make other people conscious of their project" for it to have the greatest impact.

And that impact has been great, on both the students and the St. Cloud area. Connections have been made between neighborhood organizations, citizens, and students that create a greater sense of community within St. Cloud. Students have a fun and eye-opening experience working with children and adults to provide a distinctive civic service. Perhaps best of all, the city has an accessible playspace that allows for greater interaction and play opportunities among all people. Final grade for Kaleidoscope and its dedicated team: A+. 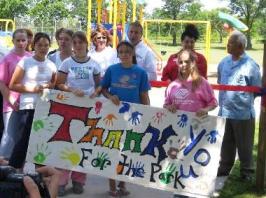 "People say, what is the sense of our small effort. They cannot see that we must lay one brick at a time."
- Dorothy Day