In early 2003, Rotary International encouraged all of the Rotary Clubs in the world to celebrate their 100th anniversary with a community project. The eight clubs of northern Sarasota County, Florida united and took up the challenge, brainstorming possible ventures and submitting their top three ideas to a committee of their presidents. Nearby Oak Park School, serving 500 children ages 4-23 with physical, mental, and emotional disabilities, got the vote, with their dilapidated playground equipment crying out for help. The 400 Rotarians wasted no time changing that, surveying their clubs for talent and resources. Architects, civil and structural engineers, contractors, landscapers, accountants, lawyers, professional fundraisers, and many others stepped forward to offer their time and abilities to the project, which broke ground in November, 2004.

A different kind of playground

The Rotarians were determined that the playground would be different from all the others in Sarasota. They'd seen sites that added a ramp or two and called themselves accessible, and knew that much more would be required for the kids at Oak Park.

So they asked the school's physical and occupational therapists to choose playground equipment that would support yet challenge the students, allowing the therapies experienced in school to be continued in a fun way on the playground. The students' motor skills, range of motion, grip strength, pushing and pulling ability, and core strength were taken into consideration.

Equipment that would strengthen the upper & lower body was chosen, and balance & stability challenges were included. The playground was designed with a 'track" encompassing it, not only useful for running laps, but also for 360° access by students and caregivers. Planners also wanted the playground to be as stimulating as possible, so there is an "orchestra area" with bells, drums, and chimes, and street signs were incorporated into the surfacing for additional learning opportunities. The equipment and surfacing were made as colorful as possible, mixing and matching hues to be visually interesting. The design earned an A+ from students in safety, inspiration, and excitement.

Raising the funds to raise the roof 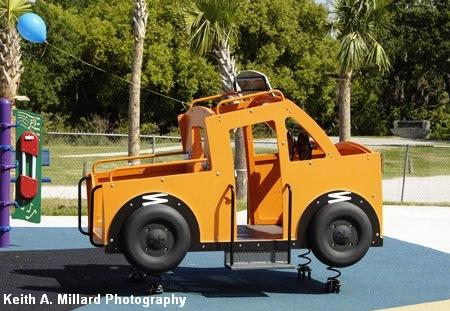 The total cost of the 7,600 square-foot playground was estimated at $300,000 by the county's Parks and Recreation Department. A little over $158,000 was needed for the equipment itself; the rest of the estimate covered planning, designing, and assembling the equipment. "Sweat equity" had been encouraged by Rotary International for the Centennial projects, however, so the additional $140,000 became unnecessary as volunteers gave 1,500 hours of their time and talents to get the job done. To cover equipment costs, each of the clubs was asked to fund the project at $100 per capita before turning to the general public for help. This money was raised through golf tournaments, celebrity roasts, raffles, assessments, and a fund-raising committee targeting individuals with an interest in helping disabled children.

This is how Art and Maureen August became involved - their late son, Jeff, enjoyed working with children with special needs before he passed away from leukemia at the age of 22. To honor his memory, Art and Maureen gave generously to the project, and when it was decided to give the playground's naming rights to the single largest contributor, the site was dubbed the Jeff August Memorial Playground.

On April 19, 2005, the long wait was over and Jeff August Memorial was ready for the clamor of child-sized feet. When asked about the proud day, project manager Michael Murphy recalls two incidents that drove home the importance of the project. 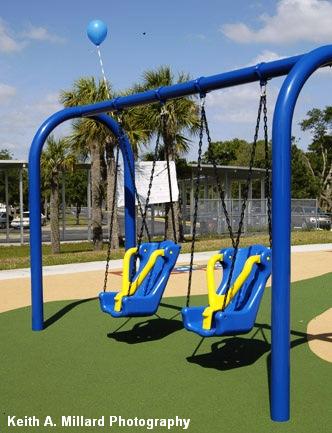 "Shortly before the dedication, the first kids were allowed on the playground. One little girl would not initiate movement on her own. She stood motionless in the middle of 20 running, jumping, laughing, and otherwise very excited children. Five minutes passed. Nothing. An aide finally sat her on a spring-loaded fiberglass toad stool. It took about a minute and then the little girl started pushing with her toes. Soon she was bouncing on the spring-loaded seat. It was a start. Self-initiated action that had not been there before."

"The other incident was with my 82 year-old mother who had a stroke several years ago. Mom has regained about 85% of her physical capability, but the aphasia still plagues her communication, cognition, and thus, her joy. She was surprised by the bounce of the flooring and tickled by the chance to be a kid again on equipment that supported, protected, and challenged her. The same playground that could be a fun supplement to the therapy of children could do the same for adults."

So it is that the Jeff August Memorial Playground in Sarasota became a labor of love, a valuable asset to the community, and a worthy tribute to the millions of Rotarians throughout the world and the great contributions they make.