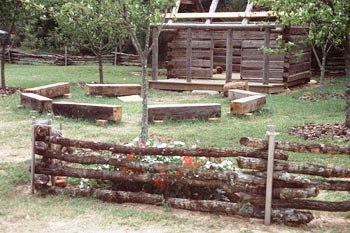 In 1995, Bruce Cunningham and Ann Petersen sent their daughter, Katie, off to kindergarten at Southern Pines Primary School in Southern Pines, NC. They were pleased with the school’s cultural diversity, and quickly came to like the principal, Blanchie Carter. The one thing that did not delight them, however, was the dilapidated state of the playground. When they took their concerns to Ms. Carter, she promptly suggested the couple head up a new playground committee. Although a bold request, it was prophetic as well, since Cunningham and Petersen had been looking for a way to volunteer at Southern Pines in a capacity outside of the classroom. It was the perfect fit –but they didn't expect how elaborate a project this "simple playground" would become. Now a four-acre outdoor learning environment open to the whole community, the Blanchie Carter Discovery Park is much more than just slides and monkey bars.

The turning point for the prospective playspace from mediocre to magnificent occurred when designer Robin Moore joined the project. An urban planner and North Carolina State University landscape architecture professor, Moore has specialized in designing play areas for 30 years. At the time, he was also the Director of NCSU's Natural Learning Initiative, a Research and Design Assistance Program aimed at "creating environments for healthy human development and a healthy biosphere for generations to come." Cunningham had heard of Moore's work in creating interactive play environments that promote inclusion of both the natural environment and universal design, a set of principles for the design of products and environments that make them as usable as possible by all people without the need for adaptation. Moore to visit the future playground site, Cunningham made him an offer he couldn't refuse –"design whatever you want and we'll find a way to make it work in the budget.” 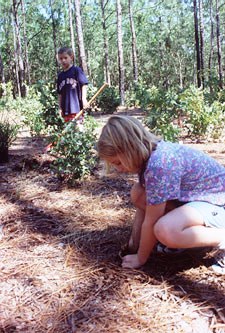 Moore wanted to create not just a run-of-the mill playground, but an outdoor classroom where children learn through play and by investigating living environments. Today, Southern Pines Primary teachers often hold classes outside to expand learning opportunities in math, science, and language arts. The bird habitat and butterfly garden make students more observant of the world around them, and drawings for future park additions include a bioretention pond to teach about the role of wetlands in reducing water pollution. Instead of painting a compass rose on the ground to teach about direction, the Big Dipper was drawn so that children can learn to follow the North Star and use nature as a guide. Students tend medicinal herb and vegetable gardens after school, during recess, and in some classes, learning about how their ancestors survived and cared for themselves. Throughout one school year the history curriculum even included third-graders building a one-half scale log cabin and pioneer settlement using authentic 1800's handtools. Planting native grasses in the longleaf pine forest near the playground, tending the blueberry maze, and participating in controlled burns of sections of the forest (with help from the State Fish and Wildlife Service) are all part of the students' unique tasks.

But good old-fashioned playground fun can also be found at Blanchie Carter Discovery Park, with balance beams, slides, climbing structures, and hanging bars enticing visitors of all ages. The largest piece of playground equipment is affectionately referred to as "the purple monster" because of its color, and is surrounded by plants in order to be naturally incorporated into its surroundings. The structure incorporates multiple 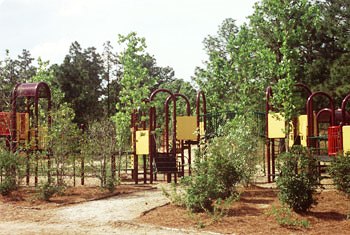 play area circuits that range from simple to more difficult, supporting the natural loop-like fashion in which children tend to play. The track surrounding the soccer field is handy for a brisk morning walk to energize the brain before class time. Loose building materials such as giant blocks are available for exploration, construction, and demolition –an endless creative opportunity that allows children to make decisions and experiment with their environment. This open-ended play is common in the "adventure playgrounds" popular in Europe (which feature wood, tires, and other large, movable building parts) from which Moore found inspiration while studying architecture in 1950's London.

Along with rich play opportunities, inclusion for visitors of all abilities was a must when designing the park, so Universal Design principles were incorporated in an effort for the park to become a model for inclusive play and learning. An accessible bird blind designed by a teacher and constructed by volunteers was built with cut-away sections that allow children using wheelchairs to roll right up to the action. Painted edging along pathways and a beeping soccer ball assist those with visual impairments. Stainless steel slides are fun for all children, but necessary for those with cochlear implants that may gather too much of a static charge from plastic slides. Low-level platforms incorporated into the purple monster allow children of differing abilities to jump and play together without being disabled by their environment. Adults with disabilities also enjoy the park, as well as help to keep it in shape –members of the local ARC chapter have fundraised for and installed a new tetherball, in addition to helping out with painting around the park. 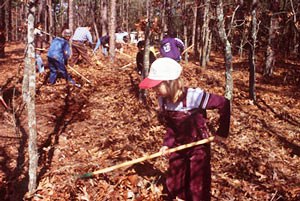 This assistance is only part of the extensive system of school and community members who maintain the park year-round. A part-time groundskeeper is a big help, but the most assistance comes from the neighbors and friends of the park who keep a defensive eye on their favorite spot. ";Deputized citizenry" is the concept that the people will protect the places and things they care about, and Blanchie Carter Discovery Park is lucky to have it in bulk. Cunningham recalls an evening when he stopped by the playground for a quick inspection of its condition and was quickly greeted by the police –a concerned resident of the area had seen him and alerted authorities to possible vandalism at the park. This obvious care is a fortunate byproduct of inviting the community to enjoy the amenities of the park instead of trying to limit its use to school students and staff.

When first planning the park, committee members had to ask themselves the age-old playground question: "to fence or not to fence?" Some fencing was needed for safety, obviously, but they were unsure as to whether the park should be for school-use only or open to the whole neighborhood. That's when they caught wind of a community park being planned just up the street, and asked to collaborate –for a donation, the Blanchie Carter Discovery Park would stay open to the public during non-school hours. An agreement was made that the park be mostly fenced-in for safety, but that large accessible entrances be provided from both the schoolyard and the public parking lot. "Besides," comments Cunningham, "trying to keep people out only asks for vandalism." So now the community embraces the park, using it for church gatherings, group walks, and family reunions...the fun and natural environment is universally appealing. 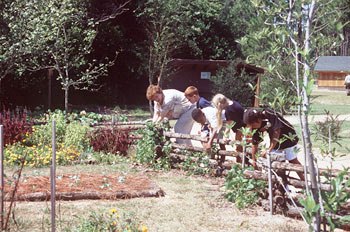 The park has a strong fan base among Southern Pines Primary School staff as well –they're happy with the positive changes seen in students since its construction. Teachers had previously dealt with a lot of aggressive behavior on the barren playground because students didn't have anything to stimulate their minds and occupy their hands. After the park's opening, however, teachers and administrators reported reduced violence on school grounds, as well as improved academic performance among students. Because of its serenity, the park is used by school counselors during sessions with distressed children.

It has been 12 years since work began on Blanchie Carter Discovery Park –named after the much-loved principal who retired just as ground was being broken –and little Katie has moved on from kindergarten to college-bound. But she and thousands of others have been able to enjoy the park and grow with it –planting, burning, building, and learning about nature and their area's heritage along the way. Reflecting on Moore's design concepts, Cunningham remarked that "An equipment-based playground is to play as paint-by-numbers is to art." This exceptional playground and natural educational center has proven itself to be an appealingly blank canvas on which all visitors can create their own perfect play experience.