The public right-of-way is crucial to fostering Play Everywhere and kid-friendly cities. Streets and sidewalks—and, by extension, the pathways, alleys and staircases that bisect city blocks—form the faces and front (or back) doors of our communities. These are the places where we interact and conduct the business of daily life, and where kids come into contact with, learn from and learn how to navigate the adult world. Reclaiming streets, sidewalks and mid-block connections as places for play brings kids front and center in our communities, while serving as a reminder to the broader community that cities are places for kids, too. 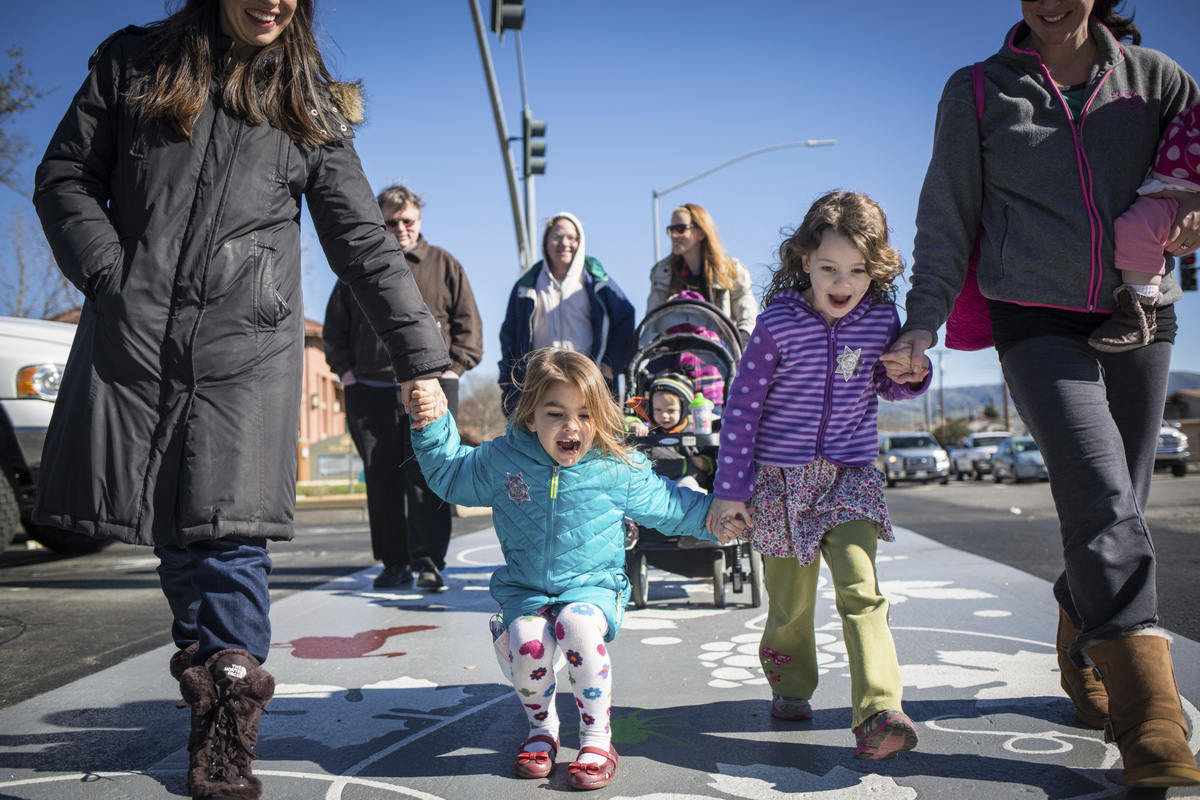 Families leapfrog their way across Camino a Jugar, or Path to Play, in downtown Morgan Hill, CA.

Streets, sidewalks and other public rights-of-way offer myriad spaces and opportunities for play. To visualize the range of opportunities for Play Everywhere, it is useful to focus on each of the individual zones and spaces that comprise a street, sidewalk and city block.

Though streets serve as places for vehicular traffic, there are numerous opportunities to reclaim portions of "street space"—the space between the curbs—for play. Cities and communities can: 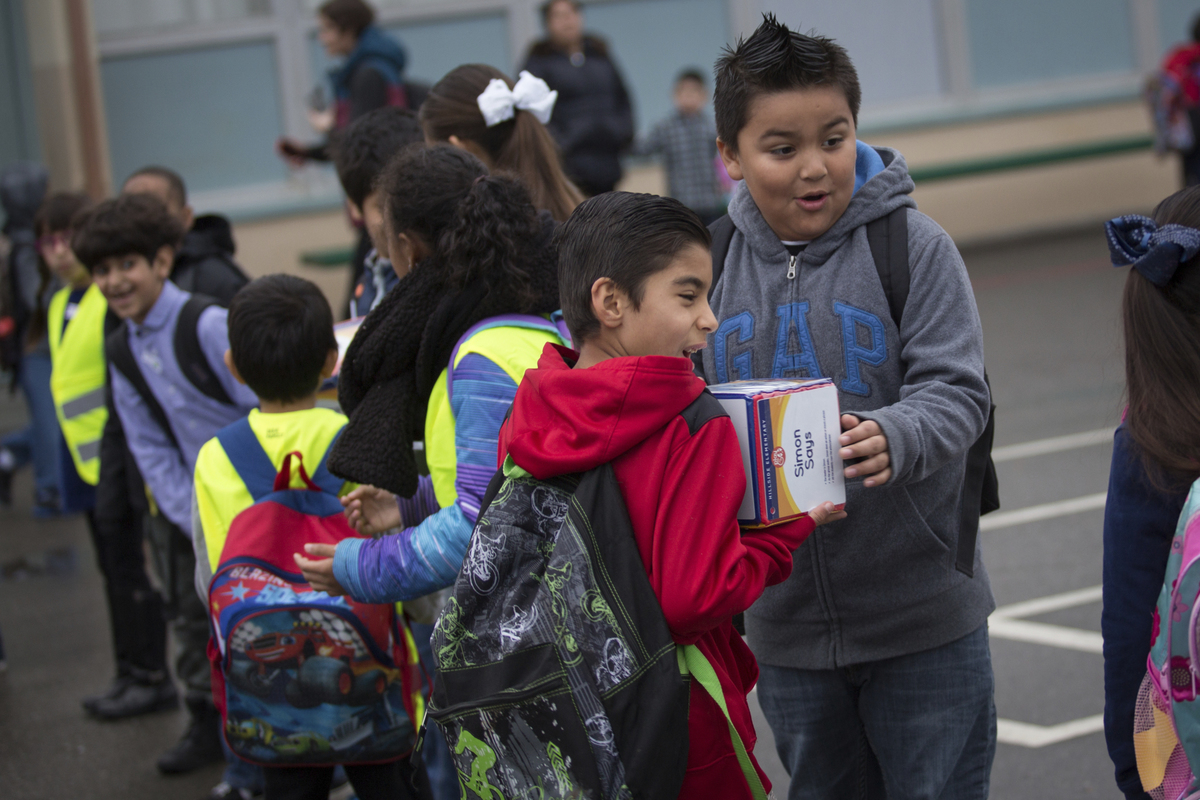 Kids at Hillside Elementary in San Leandro, CA, participate in the Playful Walking School Buses program that adds play-along-the-way to the walk to school through card games, dice, buttons and stickers.

Each of the many zones and spaces that comprise the streetscape, from the sidewalks themselves to the edges of the streetscape adjacent to the streets and buildings, offers opportunities for play. Cities can integrate playful experiences into streetscapes by:

Along city streets, many leftover spaces—the afterthoughts of buildings and transportation infrastructure—are overlooked or avoided, yet offer untapped potential for play. Some spaces, such as blank and windowless building façades, walls and fences, are simply uninviting or overlooked. Others, such as the spaces underneath bridges, may function as both physical and psychological barriers between neighborhoods because they appear secluded, unattractive and unsafe. Opportunities for reclaiming such "in-between" spaces include:

On some city blocks, a variety of mid-block passages, including service alleys, mid-block pathways and staircases, serve important functions for municipal utilities and services, while connecting people and vehicles more efficiently to their destinations. Yet these spaces are often afterthoughts and hidden from public view because they are not pleasant to navigate. With some imagination, however, these mid-block spaces also have the potential to knit together city blocks by serving as community gathering places, spaces where kids can play without coming into contact with the traffic from adjacent streets and fun routes for walking and bicycling. By taking advantage of mid-block passages, cities can: 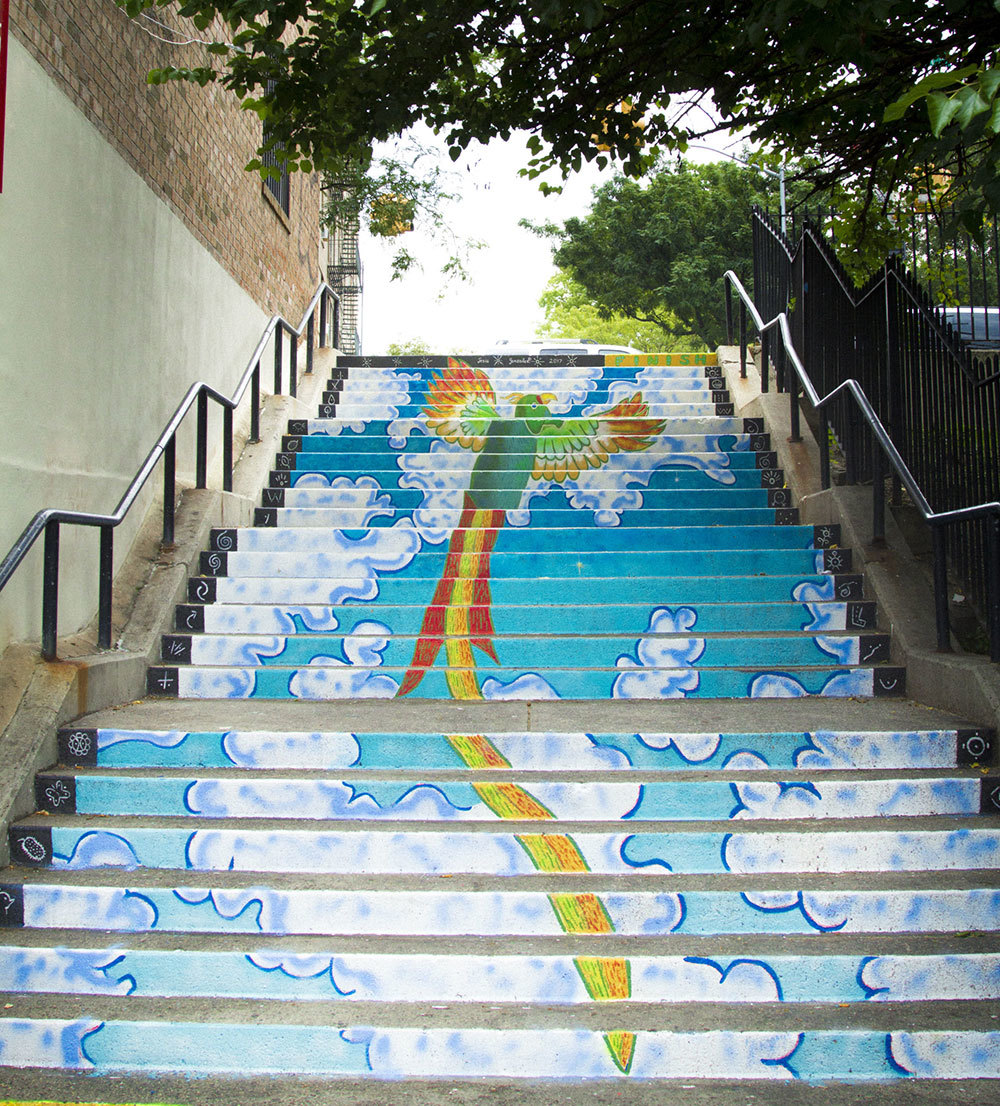 This colorful mural of a parrot along a stairway in the South Bronx in New York City is part of the Bronx Steps 2 Health initiative.

More design guides
Moveable and pop-up play Moveable and pop-up play installations offer the flexibility to respond to unique opportunities and give all kids access to meaningful and active play.
Civic spaces Providing visible play areas is an easy and available opportunity for kids and families to feel some ownership and sense of belonging in civic institutions.
Commercial spaces The many places where commercial activities occur and kids are forced to wait include underutilized spaces that can be repurposed for play.