Interview with the Inventor: Cas Holman

What was the inspiration behind the Rigamajig?

"Rigamajig began when Friends of the High Line asked me to help them develop play opportunities for families along the High Line Park in New York City. I brought Nancy Rudolf's book Workyards: Playgrounds Planned for Adventure and we knew instantly we were on the same page.

"Adventure Playgrounds have always been a huge influence on my work for many reasons. Embedding parts and pieces that inspire children to invent a story is also very important. I believe imagination is actually a tricky thing to inspire. As a designer, I try to provide curious elements that become clues, letting children (or adults) invent or figure out the story behind it. This story is usually created while they are putting pieces together- literally building the reality they are playing in. That may sound overly heady but imagination is linked to empathy and innovation is very powerful ways." 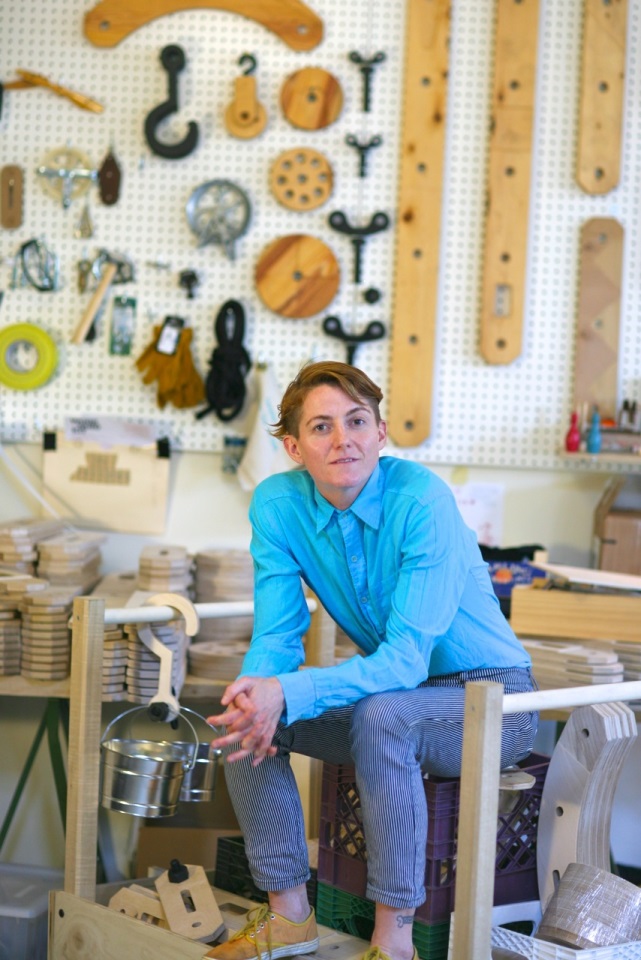 How does the Rigamajig encourage active play?

"It's fun! Kids run and reach and hold and scoot without even noticing. Some of the parts are intended to be too big for one child to use alone. They have to help each other lift and attach and move things. They have to share resources. They have to take things apart and reassemble them.

"One common comment I hear from parents (less often from teachers ;) ) is "kids love building wheeled Rigamajigs- you should include an axle" and I reply "but then the wheels wouldn't fall off!" which tends to puzzle them. "why would you design something to fall apart?" This subtle shift is one that children pick up on. They don't mind that the wheels fall off. When they are playing, they aren't inventing for "performance". They aren't trying to make the fastest or most efficient wheeled Rigamajig. When the wheels fall off they laugh, then try a different way to put the whole things together. Rigamajig is not about a finished product. It's the playful process. The collaborating. The tinkering. The soft and hard skills that are learned while kids are engaged in play. This is what learning can look like!"

What was the process to determining the best design?

"Lots of testing. Rigamajig is deceptively simple. The instructions are designed into the parts so that it's very intuitive to use. Kids see it and know exactly how to use it. They figure out what works and doesn't work, learning from each step of trial and error. Buckminster Fuller once said, 'There is no such thing as a failed experiment, only those with unexpected outcomes'. This is true of my design process!"

How long did the Rigamajig take to develop?

"Working with the Friends of the High Line we had a very short development phase. We had 4 or 5 other directions we were developing which actually led us to the idea of planks. Thankfully, they are brave, clients who clearly prioritize innovation. I proposed the Workyard Kit in February 2011 and it launched on the High Line in June 2011. The next 3 years was spent re-engineering it for mass production and integrating feedback from teachers and children's museums to help it work well in those environments."

"I've seen so many contraptions I wouldn't have thought of- pieces put together in ways that blow my mind. Penny Wilson is a playworker in the UK, she taught me the important difference between asking kids 'What are you building?' and saying to them, 'Tell me about this.' When we ask, 'What are you building?' it implies that A) they should have a goal and be working toward a finished something, B) you are supposed to be building something and children's understanding of the built world is often limited to houses, and C) you should be doing something that you can explain to me. We want to avoid all of these rules. So by saying "tell me about this" we leave the door open to stories about what they imagine, or they can share what they are discovering about putting things together, or they can tell us any number of things that may be very present in their experience with their peers, play, school etc.

Why is KaBOOM! a good fit for the Rigamajig?

"KaBOOM! is an ideal partner for the Rigamajig because we have many common goals. Play of course is primary in both our objectives, and access for children and families who wouldn't otherwise have access to free play and learning opportunities. KaBOOM! understand the importance of lasting impact. Early on, they keyed in on the importance of training-- so the Rigamajig isn't just a product but a platform from which to learn and practice playful learning, hands on building, creative problem solving, spatial thinking. KaBOOM! understands that play is about more than fun, and childhood is about more than kids."