When we announced that we were going to build a playground in the Gulf shortly after Hurricane Katrina, not everyone was happy about it. With so much devastation, some believed that a playground was the last thing people needed. Why invest time, money, and sweat into something so “superfluous” when residents were still struggling to get basic necessities, like shelter, food, and water?

Some may ask the same question of Julie Rearick, a representative from the playground equipment manufacturer Playworld Systems (a KaBOOM! partner). She recently traveled to Haiti with a group from Lifechurch in Allentown, Pa., a Playful City USA, to help build a playground at a tent city in Carrefour. Currently, there are more than 800,000 homeless people living in tents in Port au Prince and Carrefour.

We’re sure Julie and the Lifechurch volunteers would agree with us that a playground is not superfluous—that in fact, it is essential to rebuilding a community, as it provides a communal space to gather, socialize, and play. In the Playworld Systems blog, Julie (pictured below at left) related her inspiring journey, day by day. Here, we share some highlights: 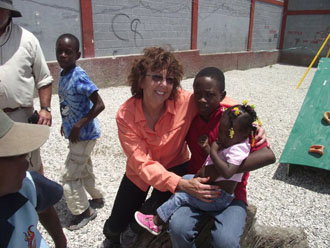 Day 1:
When we pulled off the street into the tent city, I couldn’t believe what I was seeing. "Do people really live like this?" There are children everywhere and it hits me; this is why I am here! PR [Pastor Randy from Lifechurch] takes me to the place where the playground will go and I envision the children all over it. And I think to myself it's going to be okay. [Read full post.]

Day 3
We mixed and poured concrete assembly-style like my good friends at KaBOOM! With the help of 20 or more men from the tent community, we worked hard all day in 100 plus degree heat. Since water must be ordered and delivered we worked many hours with no water to drink. Dr. Berger from Lifechurch who runs the clinic, said the children are lucky to have one or two cups of water per day. He also said when they register in his clinic many report they only eat every other day. Such living conditions are so difficult for someone like me to imagine. [Read full post.]

Day 4:
One 10-year-old boy named Mardoche became my favorite. He wanted to work to earn money for his mother and four siblings, but our rule was to have no children on the site. He stood nearby for two days and waved every time I looked at him. Today he introduced me to his mother, Leonne and she invited me to their tent. I took an interpreter with me so I could ask questions. Her husband died from an infection before the earthquake and she was a single mother with no means to feed her children. Before the earthquake, her children had attended a good school. This explained Mardoche's good manners and ability to speak some English. I gave them all the food I had for the day, promising more the next. [Read full post.]

Day 5:
The mayor of Carrefour spoke some words of thanks and cut the ribbon. Then children ran and screamed with delight. There are no words to express my emotions. Mardoche was holding my hand and saw my tears. When I pulled out my tissues, he took them and said, "me" and then took them and wiped my face. It was a moment in my life I will never forget! [Read full post.]

Learn more about building playgrounds in disaster zones in the Huffington Post.

When KaBOOM! announced that we were going to build a playground in the Gulf shortly after Hurricane Katrina, not everyone was happy about it. With so much devastation, some believed that a playground was the last thing people needed. Why invest time, money, and sweat into something so superfluous when residents were still struggling to get basic necessities, like shelter, food, and water?

But we have long contended that play is not superfluous, and this recent piece from CNN echoes our sentiments exactly:

If we no longer see real children playing outside, should we paint some instead? The UK street artist known as "Banksy" takes grafitti to a whole new level by adding whimsical touches to city buildings and walls. Among other things, he paints children at play -- a sight that is sadly less and less prevalent on today's urban streets.

To avoid prosecution, Banksy has kept his true identity a mystery, although according to Movieweb, an eBay user recently attempted to auction it off (receiving a high bid of $1 million). Whether or not you frown on renegade street art, we're willing to bet that these samples of Banksy's work will make you crack a smile: 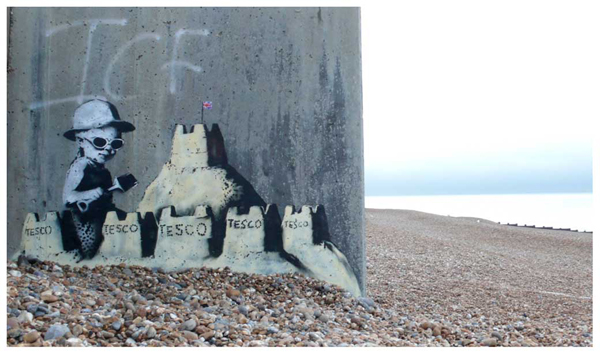 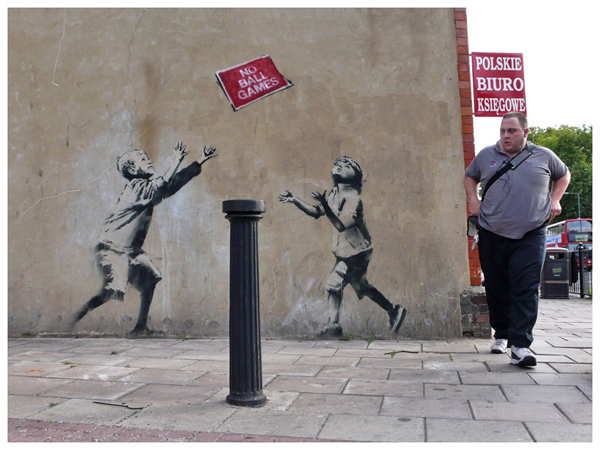 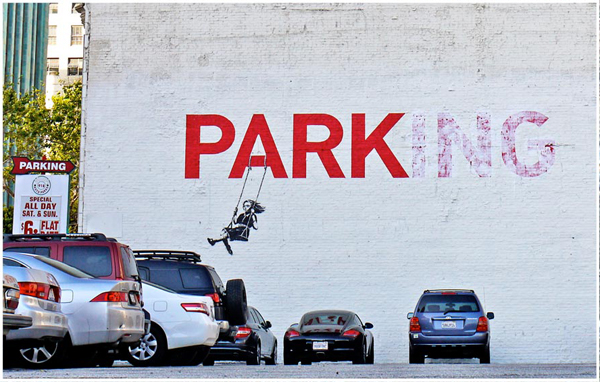 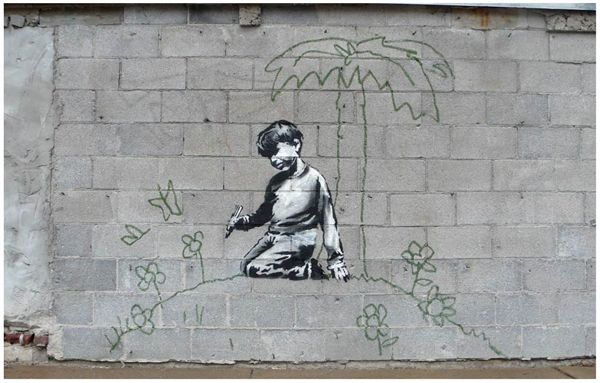 How to surf on your street

Who says you need water to surf? Or, for that matter, a surfboard? In 2009, two enterprising Southern California kids, Wyatt Brady and Dodge Wryath, made do with a blue tarp, a skateboard, and a street. A YouTube video (below) of their playful experiment has launched a rising craze known as "tarpsurfing."

How inspiring to not only see adolescents enjoying unstructured play outdoors, but to watch them innovating and exploring as they go! This is what imaginative play is all about: taking something as simple as a tarp and turning it into an ocean. See for yourself:

Tarpsurfing has become so popular since Wyatt and Dodge first posted this video, they have launched a website, BlueTarpsurfing.com.

Inspiration Monday: The Game Must Go On

"I have an idea. Let's go to the mayor and ask him to build a playground here so that we can play." So begins the delightful Greek documentary, The Game Must Go On, which was recently premiered at the Chicago Children's International Film Festival. As stated on reelisor.com, the film "follows a group of children living in a crowded Greek city with nowhere to play, who challenge a world made up of concrete, cars, quarrelling parents, and politicians."

In an age of "cotton wool" children and helicopter parents, this film is an inspiring testament to what a group of kids can accomplish -- and the lengths they will go to for a safe place to play. The trailer alone is guaranteed to make you smile:

The art for this song is by Jesse Ledoux, the animation is by PUNY, and the song is performed by The Little Ones. For more Yo Gabba Gabba! visit yogabbagabba.com.

Not all children enjoy playgrounds. Autistic children tend to hang on the sidelines, intimidated by the prospect of joining their peers in play. But at Grattan Elementary School in San Francisco, a new piece of playground equipment is supposed to change all that.

A plastic green dome, with a curvy wall full of holes, was designed to bring children together in a small space and encourage them to interact with each other while interacting with the wall. The dome was donated to Grattan Elementary by one of our preferred vendors, Landscape Structures.

The San Francisco Chronicle describes this touching moment of connection between Julian Kanter, a six-year-old with autism, and one of his classmates:

On Tuesday, kindergartner Julian, a smile on his face, ran out onto the Grattan Elementary School playground at recess and headed for the new hollow dome, climbed to the top and slowly pushed his hand through an opening. Inside the dome, a little girl reached up and held Julian's hand. It was a seemingly insignificant interaction amid the chaos of school recess, but the structure gave two schoolchildren a chance to connect—one with autism, the other without.

Pamela Wolfberg, director of the Autism Spectrum Program at San Francisco State University, says of the new dome, “All the kids love it, but the kids with autism just took to it."

As autism rates continue to rise—they increased by 57 percent between 2002 to 2006—we’re glad to see that Wolfberg and others are addressing autistic children’s unique needs when it comes to play and peer socialization. To think that playgrounds are inducing fear in growing numbers of children is indeed disheartening, and we hope other schools follow Grattan Elementary's lead.

Inspiration Monday: Discover a forest near you

Use outdoor voices only. Get your shoes muddy. Please run.

These are just a few “rules” from DiscoverTheForest.org, which has produced this great video to inspire kids to get out into nature. Says the narrator:

“Imagine a place where you can be different… or just be yourself. Where you can be silly and muddy, or thoughtful and curious. It’s not very far away, so get out and explore. There might just be another you, one you’ve never met before. You’ll find yourself out here—in our forests and parks. This is where the other you lives.”

In recognition of Children & Nature Awareness Month, get out there and discover a forest near you!

Thanks to The Grass Stain Guru for sharing this video with us.

Now that it is officially spring, the outdoors is calling. But sadly, a lot of kids won't be taking full advantage of the warming weather—studies show that children today spend 50 percent less time outside than they did just 20 years ago. Not only that, but according to the Kaiser Family Foundation, kids are spending an average of 6.5 hours a day with electronic media.

We hope to change that. So do the folks over at Activekidsclub.com, who have created a video that is sure to make you want to ditch your computer for a breath of fresh air. You'll also no doubt feel some pangs of nostalgia for the days when rolling down a grassy hill was the epitome of fun. Enjoy!

In preparation for this week’s Inspiration Monday, I reflected on my most rewarding experiences. They were almost always the ones in which I had to take risks and get outside my comfort zone. Despite some bumps along the way, the experiences ultimately had a lasting impact and prepared me well for taking on other challenges.

The residents of the Sabal Palm Apartments in Fort Myers, Fla. had to get outside their own comfort zones as they planned and prepared for a playground build last April. They were active in the planning process and reached out to local businesses to ask for help in fundraising and for materials and food for the playground build. The success of the build was a testament to their hard work and dedication.

The playground's impact was immediate. Not only were the kids from the Sabal Palm Apartments running to the playground to play, but also kids from surrounding neighborhoods. Even the adults joined in the fun and started playing hopscotch! The kids took ownership of their new playspace by patrolling the area to make sure it was clean and setting up weekly recycling pick-ups. Sabal Palm residents took a risk, but the rewards will live on in the smiling faces of their children and the enduring community bonds.

Check out our Playspace Finder to learn more about the Sabal Palm playground.