Playgrounds made from junk

Here’s one complaint we frequently hear from families: “All the playgrounds look the same.” They’re right: Many neighborhood playgrounds offer a similar array of equipment, in similar styles and colors. No wonder our kids get bored.

The truly unique playgrounds, where a family might easily wile away an afternoon, tend to be concentrated in downtown areas and require hefty budgets. So how can we bring the thrill, ingenuity, and whimsy of these destination playgrounds to the neighborhood level—without breaking the bank?

Perhaps the answer lies in our trash bins and junkyards. Plastic bottles, car parts, old tires, and shipping containers can all be scavenged, and can each offer unique play opportunities. Don’t believe us? See for yourself:

Would you want one of these playgrounds in your neighborhood?

The great wooden playgrounds of Berlin

In the United States, a wooden playground is a rare sight to behold. Though kids are naturally drawn to the textured surface and natural feel of wood, safety and maintenance concerns have drawn us toward the bright (some might say garish) allure of plastic.

Not so in Berlin, Germany, where wood dominates many playgrounds. Part-time resident Judith Markoff Hansen was kind enough to share some of the wonderful photos she's snapped while wandering through neighborhoods, mostly in the "old East." Judith says of the city's neighborhood parks:

"All elements of the new Berlin come together here. Young families are flocking to some of the gentrifying old eastern areas and new friendships between parents are being formed. Playgrounds initiate that...and a sense of community."

Of course, friendships and communities are forged on wooden and plastic playgrounds alike. Still, it's hard to look at these photos and not feel a tug of nostalgia. Wood may have its disadvantages, but when it comes to play equipment, its warmth and whimsy remain unmatched.

Photos are by Judith  Markoff Hansen, unless otherwise noted.

This isn't the first time we've blogged about Berlin. See other awesome playgrounds in the city.

The artist who knitted a playground 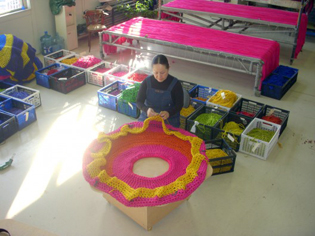 If you thought knitting a sweater required patience, try knitting a playground. That’s right—Japanese artist Toshiko Horiuchi MacAdam (pictured right) challenges our understanding of what a playground can look like by creating breathtaking, interactive “sculptures” from colorful nylon ropes.

ArchDaily editor Vanessa Quirk recently sat down with Horiuchi MacAdam to learn more about her work. (You can read the full interview here.) When asked what motivated her to start creating playspaces for children, Horiuchi MacAdam says:

"One day I was exhibiting a 3-dimensional open-work textile sculpture I had created in collaboration with a friend. Some children came to the gallery and climbed into it. Suddenly the piece came to life. My eyes were opened. I realized I wanted just such a connection between my work and people alive at this moment in time (not a hundred years from now). I realized I was in fact making works for children. It was an exciting moment for me.

"I was teaching at the Bunka Institute in Tokyo at the time and with 2 of my students I began to look carefully at the situation for children, in particular regard to play. We spent the next three years, mostly weekends, visiting all the parks and playgrounds in central Tokyo.

"The result of our research was depressing. At the time the country was narrowly focused on economic development; few were considering the effects on children of growing up in cramped, high-rise apartments, watching television, often an only child without brothers or sisters to interact with. I was very worried about this. I felt I needed to do something to bring even a little change. 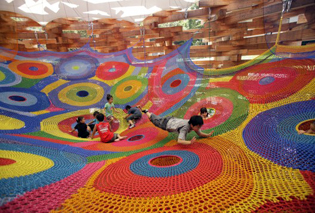 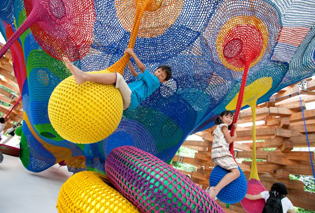 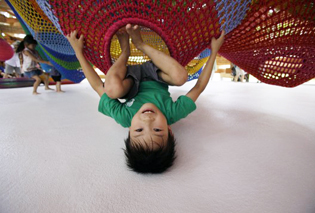 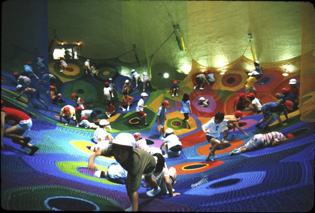 "The crochet forms I make resemble the mother’s womb. The soft, elastic surface is familiar to the child. The net membrane is sensitive to the child’s slightest movement capturing his energy and transmitting it back to him. The wave-like motion of the net connects him with other children and they start playing together. Their creative minds start to move and they find new ways of playing. They respond to each other. It is sometimes hard to entice children out of the net; they can sometimes be lost in it for 3-4 hours.

"Our structures encourage children to challenge themselves but with many routes and options. There is no program of play. There are always alternatives. Each child plays at the level he or she is comfortable with. From forty years’ experience I have learned a little about children’s psychology.

"Often it is parents who are the problem. They seem to have forgotten what it was like to be a child."

Special thanks to ArchDaily for sharing this excerpt. Read the full interview here.

Need a place to hide? Here are 13 handsome homemade forts.

As the cold sets in, most of us will feel an urge to find a cozy retreat. Small spaces beckon to us, spaces where we can huddle up with loved ones and perhaps enjoy a steaming cup of hot cocoa or tea.

Children have mastered the art of building small spaces, often out of scraps and other loose parts. Let's look to them for inspiration -- because who says forts are for 'kids only?'

A playground designed and built by teens

We've written here before about folks who want to ban teens from playgrounds. But Alex Gilliam of Public Workshop has a much better idea -- why don't we get teens building playgrounds instead?

From October 1-15, a group of Philadelphia teens worked with Public Workshop to "design-build" a one-of-a-kind adventure playground in the Pennsylvania Horticultural Society’s PHS Pop-Up Garden. The teens built the framework, then invited kids and their families to imagine what was on, around, and in between. They designed and built ramps, the climbing wall, the swing, a treehouse, a see-saw, and much more.

Using simple materials found at any hardware store, the teens, kids, and parents exemplified a can-do spirit while highlighting the importance of play, civic engagement, and community building.

Alex says, "smartly targeting certain age groups to design and build particular portions (relative to their abilities)... leads to maximum social impact, a well-built structure, a really cool playground that was singularly impossible to imagine by one person or a group, and a heck of a lot of FUN." Check out these inspiring photos:

Treehouses to drool over

There is something about a treehouse that appeals to children's inner adventurers but also to their desire to find somewhere cozy and secret to hide. In fact, our fascination with treehouses may be one aspect of childhood we never really outgrow.

Can anyone look at these photos and not feel overcome by an itch to take up residence in a tree somewhere? Go ahead. We dare you. 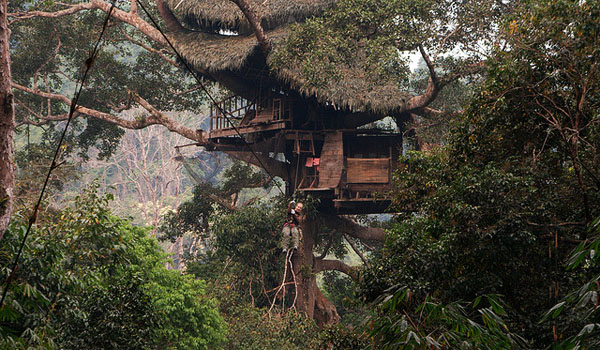 The Gibbon Experience in Laos consists of a number of treehouses like this one, each connected to one another by a zipline. Photo by Christian Haugen (cc). 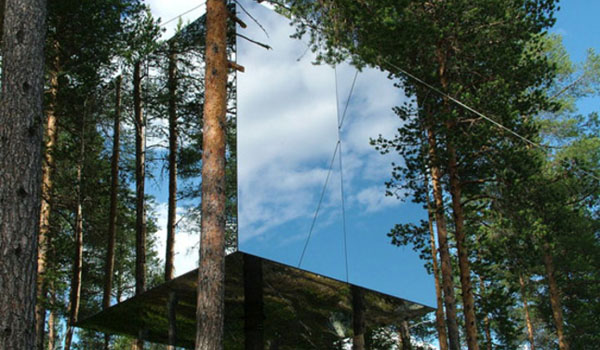 This reflective glass treehouse in northern Sweden blends into the forest so well, it's become a hazard for unsuspecting birds. Photo via Dwell. 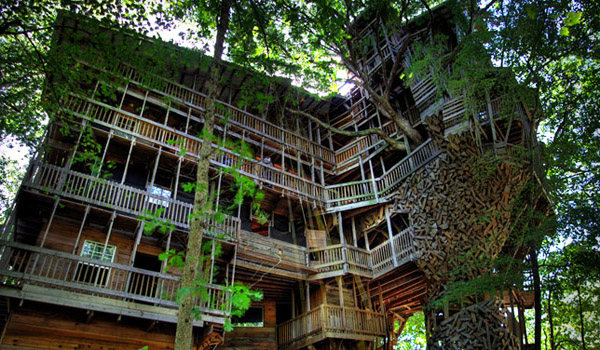 In Crossville, Tennessee, this monstrous treehouse spans seven trees and boasts over 80 rooms. Photo via fubiz. 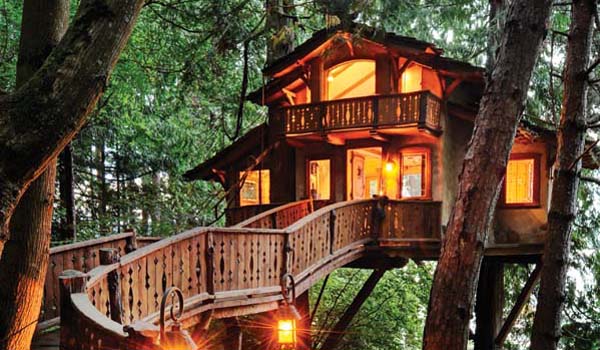 The home of the Danilchiks in Port Orchard, Washington. Photo via 9 Wows. 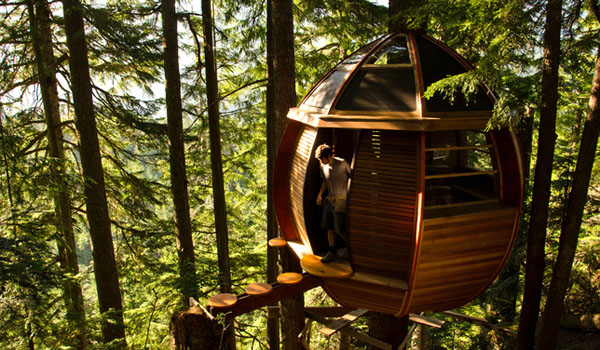 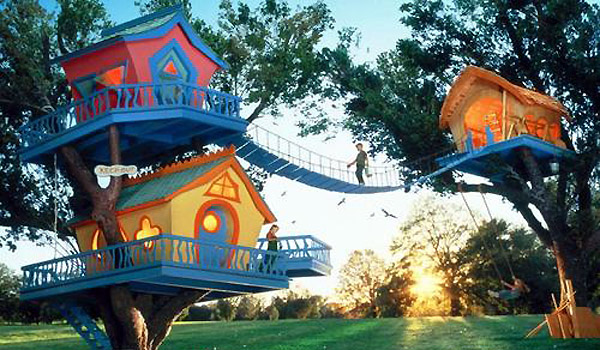 The Magical Treehouse in Vermont. Photo via Blue Pueblo. 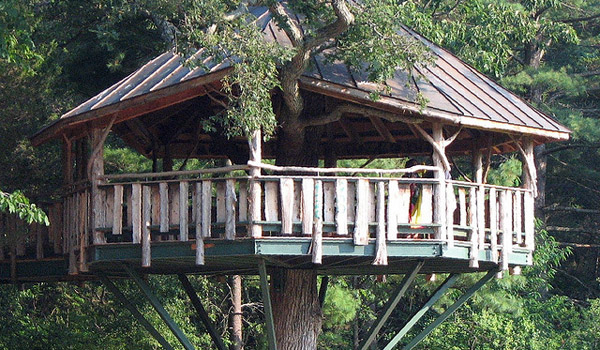 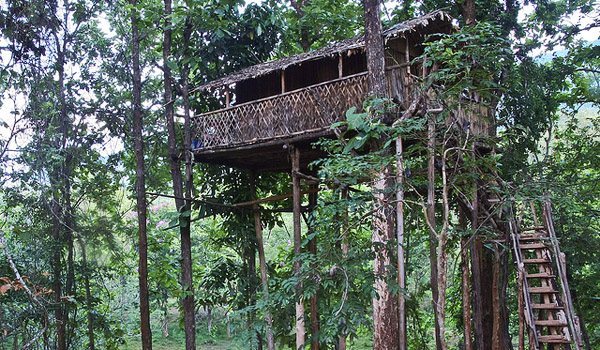 This treehouse in Kerala, India has trenches dug around it on the ground below to dissuade curious elephants. Photo by Pandiyan (cc). 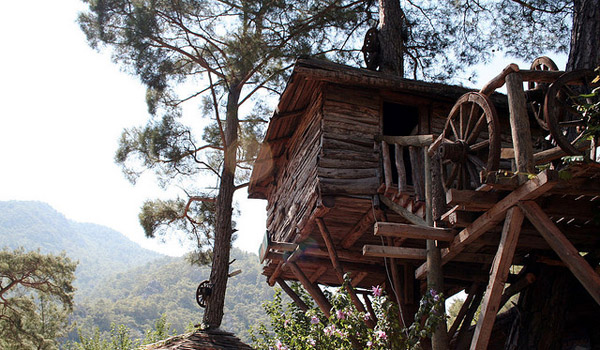 Ditch the waterpark. Go play in a fountain!

Waterparks are tons of fun, but often expensive and out-of-the-way. Why not cool off downtown, for free? Everyone loves the hypnotic aesthetic appeal of a fountain, but what's even better than admiring a fountain is playing in one!

Here are some of our favorite shots of downtown summer fun:

Where the wild playgrounds are: A tribute to Maurice Sendak

Maurice Sendak once said, "Children are tough, though we tend to think of them as fragile. They have to be tough. Childhood is not easy." He gave kids a lot more credit than we tend to these days, respecting both their resilience and their imaginations.

Many of today's playgrounds do neither, lacking both whimsy and risk. After receiving the Caldecott medal in 1964, Sendak said, "...it is through fantasy that children achieve catharsis. It is the best means they have for taming wild things."

In honor of Sendak, here are some of our favorite "wild playgrounds":

Check out our related post, Our favorite dangerous playgrounds.

For more inspiration, visit our Wacky & Wild Playgrounds Pinterest Board.

Want to pay tribute to Maurice Sendak? Earn your very own Maurice Sendak Tribute Badge by signing into our brand new Map of Play. By taking action for play now, you can help fuel children's imaginations for generations to come!

In honor of National Playground Safety Week, we present our favorite "dangerous" playgrounds--that is, playgrounds that make no secret of the risks they present. Interestingly, the perception that a playground is "safe" may cause children (and parents) to act carelessly, potentially leading to injury. By contrast, when risks are obvious, children are likely to proceed more cautiously.

Would you let your children build this? We stumbled across this amazing photo on the blog, Mama's Minutia. Says Jennifer Jo, the author and mother of the children pictured:

"There is a shift that takes place when your kids gain the skills to construct monumental forts that reach truly frightening heights. I’m not exactly sure what to do with their newfound ability to threaten their physical well-being."

For more photos and the wonderful story behind this homemade jungle gym, including its eventual demise, read the full post, "rise and fall." 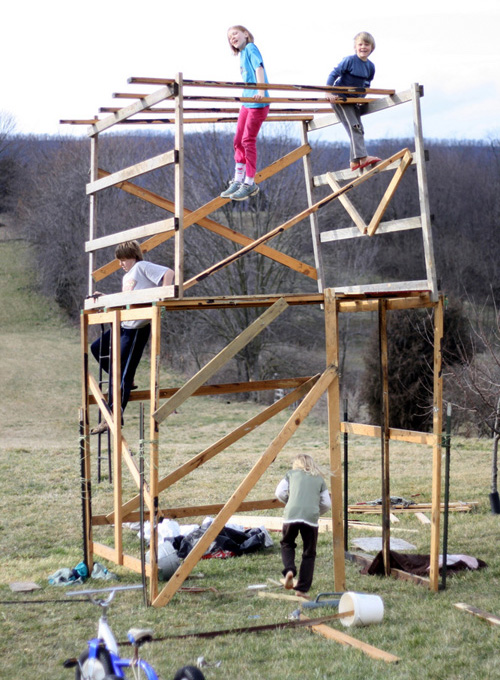