Our Summer Playground Challenge: The results are in! [Infographic]

Over the summer, we challenged parents across the country to visit as many playgrounds as they could -- and to document them on our Map of Play. Sixty-five moms and dads rose to the Challenge with gusto (and earned some cool prizes along the way)! See the impressive results below.

Inspired to join? The summer may be over, but the Challenge goes on! Visit our Map of Play for details.

Build a roller coaster for your kids. Or better yet, WITH your kids!

Over the past few weeks, two Ohio parents have become Internet celebrities for the 12-foot-high roller coaster they built for their kids out of PVC pipe. We are duly impressed. Though we build nearly 200 playgrounds a year, we have yet to build a roller coaster.

Do you know what's even more impressive? In California, a group of tweens and teens are building their own roller coaster at Gever Tulley's Tinkering School. That means they not only get to experience the thrill of the ride, but are also learning valuable construction and engineering lessons along the way. 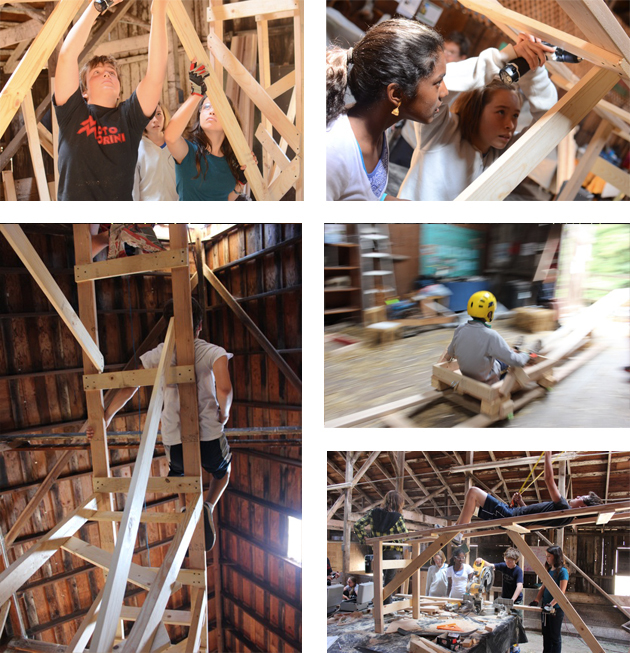 Stand up (or lie down) for sidewalk chalk!

This summer, sidewalk chalk has been under attack. A neighborhood HOA in Colorado tried to ban chalk art from its common spaces, and a 29-year-old mom in Richmond, Va., was sentenced for letting her four-year-old daughter draw with chalk on some park rocks.

It's time to stand up for sidewalk chalk! On Tuesday, August 21, join Chalk the Walks, a national annual event, to spread joy through this wonderful, whimsical -- and did we mention, washable?! -- medium.

Chalk the walks with your neighbors and friends -- and remember, sidewalk chalk isn't just for kids! Here's some inspiration to get your juices flowing:

The 5 C's of a great playground

Our Summer Playground Challenge just drew to a close, during which over 60 parents explored local playgrounds with their kids, adding over 4,000 new photos to our Map of Play! We asked our newly minted play experts what it is that distinguishes a good playground from a great one.

From their many thoughtful responses, we’ve culled the 5 C’s of a great playground:

Many post-and-platform playgrounds offer the same play options over and over again. A great playground offers something new.

“I like playgrounds that offer interesting options to play on. Clambering up huge tires versus a wall or having a four person teeter-totter as opposed to two changes things up a little.” – Fezeka Saige

A great playground isn’t just for kids. It’s a gathering space for an entire community, from tots to teens to grandparents.

“I look for a sense of community in a playground. I also like seeing people of all ages... from older people practicing tai chi or playing chess and answering questions from my kids, to the teenagers, to the parents of kids like myself.” – Alex Nguyen

A playground that’s hard to find risks being underutilized. A visible playground teeming with children inspires passersby to stop and play!

I think [playgrounds] are best when people can see that they are there and that people are playing there. – Dana Wheatley

We know that play is not limited to the playground! A great playground is connected to other play opportunities, particularly green space or other natural elements.

“My favorites have always been those with lots of trees… and trails for riding bikes. Bonus: if the playground has great view!! We have some here on top of the hill or on higher parts of the city, and it's such a pleasure to be at those playgrounds.”  - Annie

Ditch the waterpark. Go play in a fountain!

Waterparks are tons of fun, but often expensive and out-of-the-way. Why not cool off downtown, for free? Everyone loves the hypnotic aesthetic appeal of a fountain, but what's even better than admiring a fountain is playing in one!

Here are some of our favorite shots of downtown summer fun:

Our bucket list: 23 things every kid should do before turning 13

“When you are a kid you get to ride bikes, scooters, play with toys and use your imagination. You don’t have to go to work or do all the things old people do.” These are wise words from Caine, the boy who became an Internet sensation for his cardboard arcade and who recently reflected on growing older for his 10th birthday.

While we hope that adults still find time to play, Caine is right that childhood is a particularly opportune time to explore, discover, and create. The good news is that at age 10, he still has a few years before officially making the transition from “child” to “adolescent,” and we hope he makes the most of them!

To help him out, we’ve created a bucket list of things every kid should do before turning 13. Of course, we could go on and on, but here (in no particular order) are 23 things we consider essential. What would you add?

Let the games begin! Since our brave Playground Challengers are spending quite a bit of time playing this summer, we asked them what Olympic events their kids would rock... if the Olympics were held at the playground.

Here are five of our favorite new Playground Olympic events -- plus one event we hope your kids don't champion!

In which of the following would your kids take home the Gold? Got any new Playground Olympic events to add to our list?

Hold your own Playground Olympics 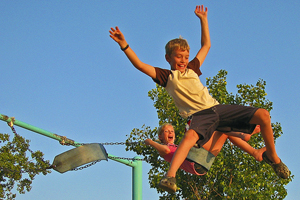 Do you have Olympic fever? We do. After all, the Olympics encapsulates many of the elements that make outdoor play so critical: teamwork, skill development, challenge, and fitness, to name just a few.

This Saturday, July 28, As First Lady Michelle Obama leads the U.S. Delegation to the 2012 Olympic Games, she’s calling on families around the country to support Team USA, not just by cheering on our athletes, but also by organizing their own Olympic Fun Days.

Since we can’t think of any more fitting place to hold your own Olympics than at the playground, here are five Olympic-inspired playground games:

Find an Olympic Fun Day near you, or organize your own at Meetup.com. What are your ideas for Olympic playground games? Please share in the Comments section below!

How to make ice cream in a coffee can

As you may know, we at KaBOOM! are big fans of ice cream -- and it's not just because we were the first nonprofit to have its own Ben & Jerry's flavor. Ice cream, in moderation, brings joy to children's lives. And it is best relished outside, after a day full of outdoor play.

So of course we were excited to learn that July is National Ice Cream Month! Why not pay homage to this exquisitlely frosty treat by making your own? You don't need any fancy equipment -- just ice, salt, tape, and a coffee can.

The best part? Your kids can get a healthy dose of outdoor play while they're at it. Here's how:

5 ways to save play this summer

Are your kids getting enough outdoor play this summer? We wish we could tell you to open your front door and shoo them outside, but sadly, many will find only empty streets, void of other kids to play with.

We can help you fix that. Here are five ways you can save play in your community, by not only getting your kids outside, but also the whole neighborhood. Click on each photo below for instructions on how to get started. Then, go play!