“It’s not fair” is a common refrain amongst children. When in reference to a friend getting more money from the tooth fairy or a sibling getting a slightly larger scoop of ice cream, we adults tend to be dismissive.

But what six-year-old Laurence Howard finds “not fair” is a much more serious claim. A resident of Red Bank Run Townhomes in West Deptford, New Jersey, Laurence says of new outdoor play restrictions imposed by condo management: "It's not fair for all the kids, because we need to play, we need air, it's not fair because everybody has stuff to ride.”

Says Jeziah Lopez, "Being inside just playing video games, it's not good for your body."

"It's not good for our freedom," Antonio Leon chimes in.

According to 6 ABC Action News, children at Red Bank Run Townhomes will no longer be able to ride bikes, scooters, and skateboards in the parking lot and other common areas. Why? Because “the activity could be harmful and even dangerous to [the children] or to others.” From now on, all outdoor play will be relegated to a small playground in the rear of the complex.

It’s no secret that we at KaBOOM! love playgrounds. But we also support children playing in other public spaces, particularly when a playground doesn’t accommodate older children or provide room for bikes, scooters, skateboards and other wheeled devices. We also believe that a group of playing children is perfectly capable of sharing a space with attentive adult drivers.

The real danger, of course, is not kids playing in a parking lot, but kids being forced inside. As the Red Bank Run children astutely point out, to deny them air is not good for their bodies or their freedom. Perhaps the community would be better off if Laurence, Jeziah, and Antonio ran the condo board instead. First up on the agenda? May we suggest a ban on careless drivers in the parking lot?

Winners of our "Little Artists" contest

We asked little artists to send us illustrations that depict their favorite way to play outdoors. After receiving so many amazing entries, we selected ten winners. Their drawings will be enlarged and recreated by a professional artist for the new KaBOOM! headquarters.

It was a tough decision, so we selected two Grand Prize winners, Jake Bannister and Helen Bartman, to come to Washington, DC and be the KaBOOM! CEO for the day. We’re looking forward to Jake and Helen telling us what to do for the day!

All kids that submitted entries will receive a special gift from KaBOOM!. Here are all the ten winners: 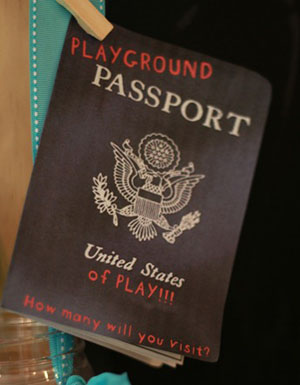 Being a nonprofit with a vision of a playground within walking distance of every child in America, we're especially partial to playgrounds. Why not take a week off work to explore the playgrounds your hometown has to offer? Here are five reasons to take a playground staycation:

And here's a bonus reason -- you can win prizes! From July 3 to August 13, every photo you submit of the playgrounds you visit can earn you an entry in our weekly sweepstakes drawing. We're giving away gift cards for toys, shoes, ice cream, outdoor gear, and more!

To reap all these exciting rewards, "book" your staycation by joining our 2012 Summer Playground Challenge!

What you can do with a cardboard box

Each summer, parents dole out hefty amounts of cash to keep their children entertained. Yet the wildly popular recent video about Caine's Arcade -- which chronicled the creation of a cardboard arcade built by a bored boy who had to tag along with his dad to work last summer -- proved that not only can a bit of boredom fuel ingenuity and creativity, but also that kids don't need a whole lot to occupy themselves.

This summer, try giving your wallet a break and your kids a cardboard box. Even better, give them a dozen boxes so they can build their very own pop-up playground! Get inspired by some of our favorite photos of cardboard box play from around the web: 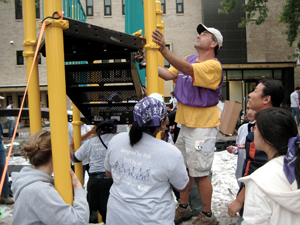 But not for one very special volunteer. Now with 38 playground builds under his belt, Ed Barker (pictured right) describes himself as a "KaBOOM! volunteer addict." Here's more from Ed:

"Though I live in the Chicago area and have participated in the majority of the builds here, I have also traveled to several other states to volunteer on various playground builds. I first got involved with KaBOOM! when my employer, Fannie Mae, sponsored several playground builds in New Orleans not long after Hurricane Katrina.

I enjoyed the Build Day so much that I have been addicted to being a KaBOOM! volunteer since. I have worked on 38 different playgrounds in various states. I go back and visit as many as possible and keep in touch with people I have met during the build; they are all being used to their fullest potential and the children love the site as much today as the day the caution tape was removed!

There are three parts of the project that I love the most. First is Prep Days and all the work that goes into ensuring a safe and productive Build Day. And, then it's the end of the build day when the children get their first sight of the completed project. The expression on their faces and the squeals in their voices, it makes the whole project worthwhile.

Finally, and this happens on most projects I have worked on, it's the gathering of the community to build a safe place for children to play. There have been numerous times when I have worked alongside of two neighbors on the same block who have never spoken and now they are working side-by-side and quickly becoming friends.

And, I am always humbled when the project is complete and all the volunteers are standing together, looking at the results that hard work and a positive attitude can accomplish -- the pride that shows on their faces is indescribable."

Three cheers to Ed and to all of our Chicago volunteers who have helped us bring 100 great places to play to children in need!

Sidewalk chalk hearts are offensive because...?

“You have to be kidding me.” According to CBS Denver, this was mother Sarah Cohen’s initial reaction when she learned that her neighborhood HOA is trying to ban sidewalk chalk art—and it’s ours, too.

Cohen’s 3-year-old, Emerson, has inadvertently ticked off some of her neighbors, who contend that her chalk drawings of flowers and hearts violate HOA rules because they “offend, disturb, or interfere with the peaceful enjoyment” of their shared space.

Emerson is also using the chalk to learn how to spell her name. The nerve!

Why a child’s whimsical chalk art would disturb anyone’s "peaceful enjoyment" of gray asphalt is simply beyond us. As residents of the Denver neighborhood duke it out in an upcoming meeting, we hope that a child’s right to play will trump an adult’s right to enjoy his asphalt unblemished. 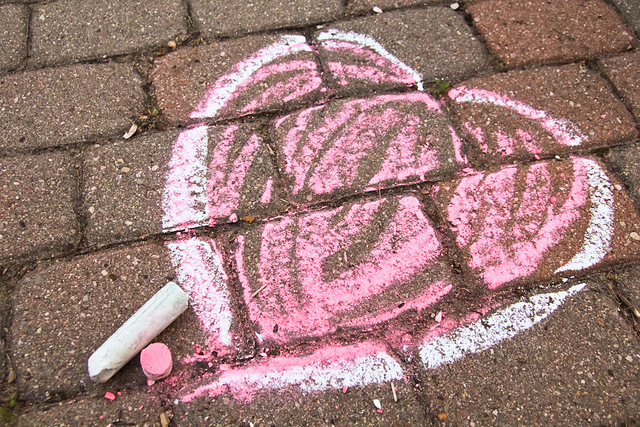 Avert your eyes! This chalk heart is out to disturb your peace!

A contest for little artists: Enter for a chance to be KaBOOM! CEO for a day! 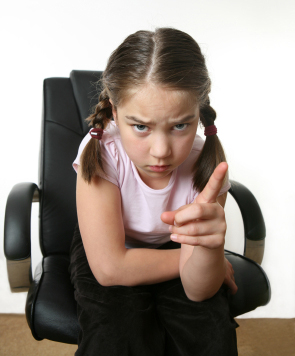 How does your child like to play? We are seeking illustrations from little artists that depict their favorite way to play outdoors.

Ten winners will see their drawings enlarged and recreated by a professional artist in the new KaBOOM! headquarters in Washington, DC. One lucky Grand Prize winner will get to come to DC to be KaBOOM! CEO for a day!

The contest is open to U.S. residents 18 years and older, who submit on behalf of a child or multiple children, ages 3 to 12. Entries must be emailed or received via postal mail by July 6, 2012 (deadline has been extended!) and will be judged by an internal panel of play experts. We will announce the winners on July 10.

Here's how it works:

Please send only one entry per child. If sending on behalf of multiple children, email each entry separately. Mailed entries may be sent in the same package as long as it is clear who created each piece of artwork.

The first names of the 10 winners will be “signed” beside their work and you will be notified and sent a photo to show how he/she has made our offices a fun and playful space. We will arrange a two-night trip for two to Washington, DC for the Grand Prize winner so he/she can visit our office and be KaBOOM! CEO for a day!

Why all kids need to play in mud + our favorite photos

On June 29, the World Forum Foundation is encouraging children around the world to wallow, romp, dig, and slither through MUD. We take a moment to pay tribute to this ooey gooey carpet-staining substance.

But most importantly, mud play is downright fun! You just can't look at these photos and claim otherwise: 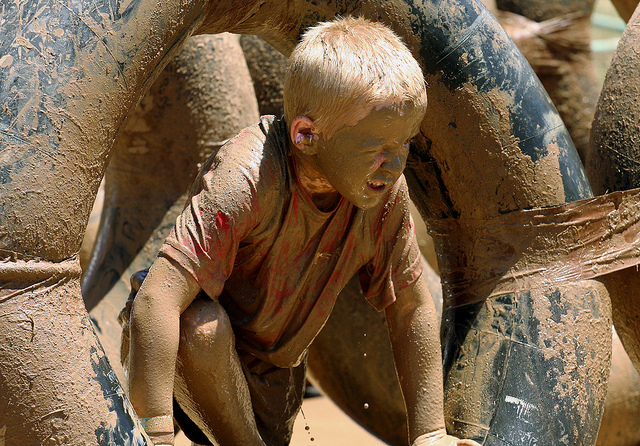 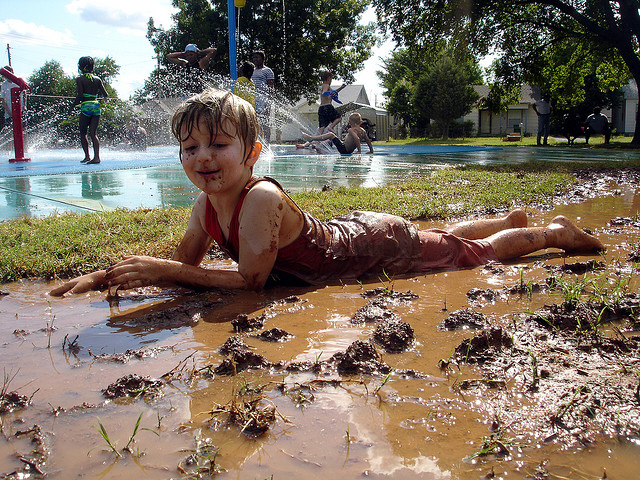 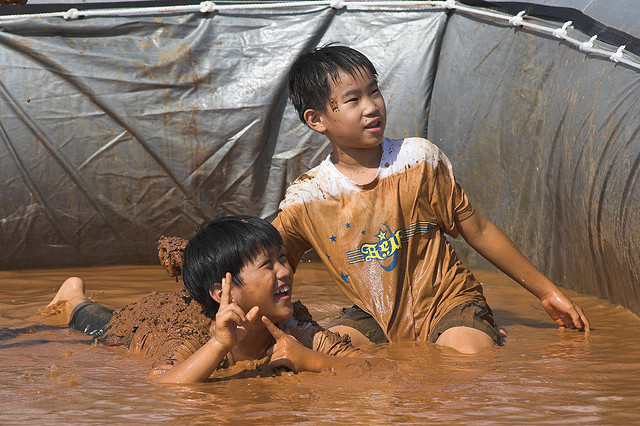 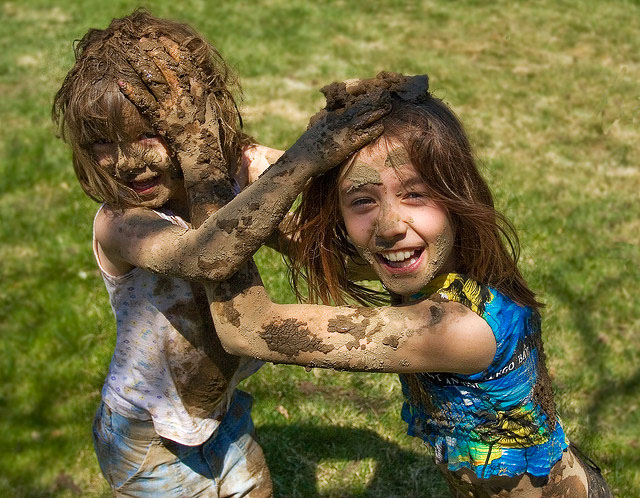 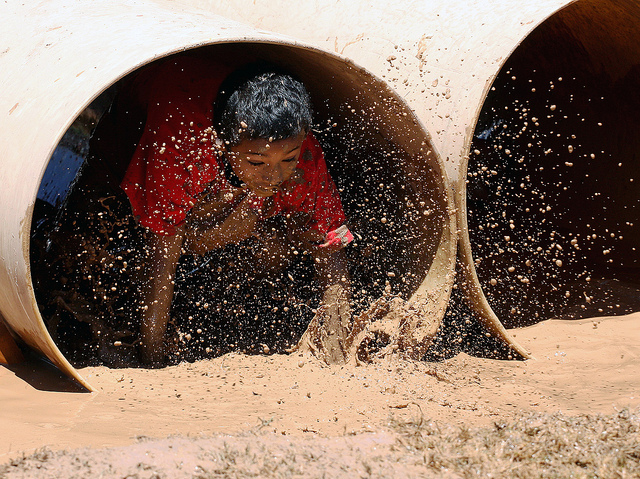 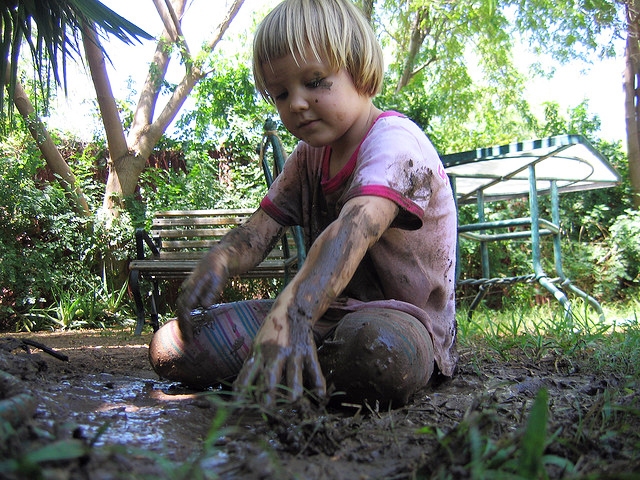 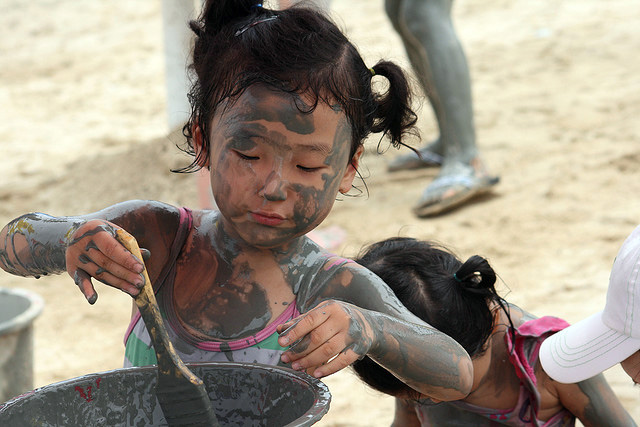 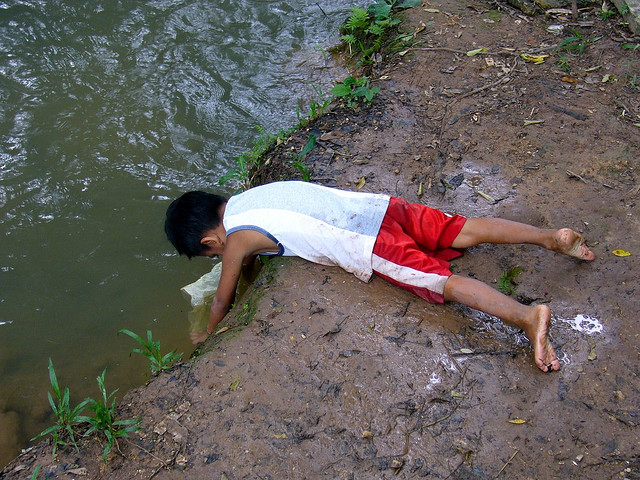 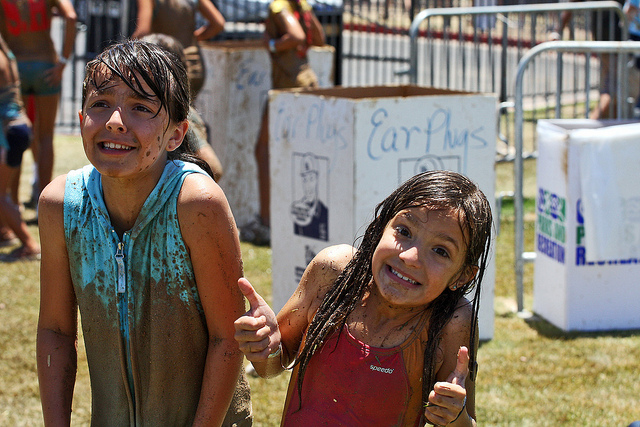 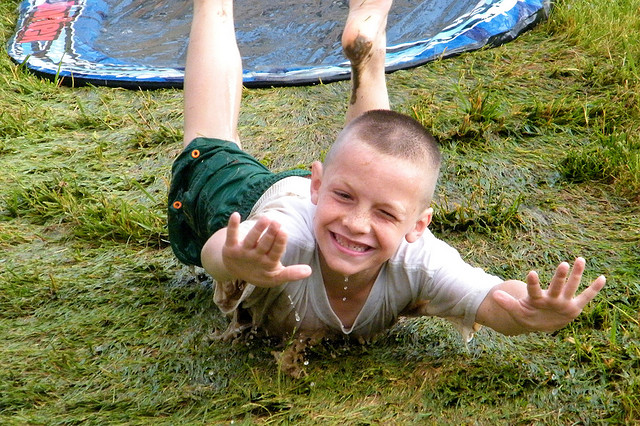 What's your favorite memory of playing with dad? 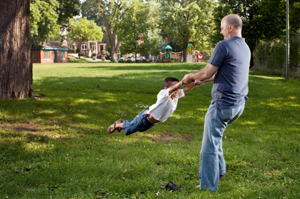 Did you ever used to roughhouse with Dad? You may not have known it at the time, but according to the National Institute for Play, he was teaching you valuable life skills, like "social awareness, cooperation, fairness and altruism." He was also helping you learn to regulate your feelings and behavior.

When outlining the benefits to children of having involved fathers, ChildWelfare.gov points out, "Fathers spend a much higher percentage of their one-on-one interaction with infants and preschoolers in stimulating, playful activity than do mothers." And it is through play, says Mike Hall, founder of Strong Fathers-Strong Families, that "fathers can better control the laboratory that helps children learn to deal with the frustration and anxiety that accompany true learning."

But you and Dad were just having fun, which is of course the most widely appreciated benefit of play. Unlike math homework, it never felt like learning. In honor of Father's Day, let's take a moment to celebrate the joys (and frustrations?) of playtime with Dad.

Take a moment to share with us your favorite memory of playing with Dad in the comments section below.

We'll feature our three favorite comments on our blog and send the commenters a free copy of our new Go Out and Play! book, a collection of great outdoor games! 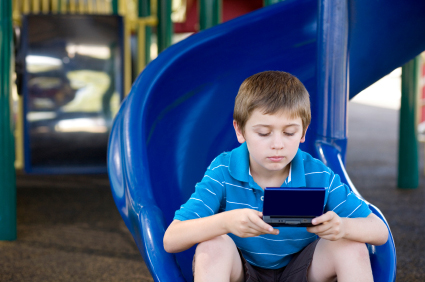 By simulating the video game experience on the playground, Danish playground equipment manufacturer Kompan is hoping to lure kids outdoors who would otherwise be hooked into game systems on the couch.

Bob Ross, president of Salt Lake City-based Play Space Designs, told the Salt Lake City Tribune, "These are physically challenging games, and that’s what appeals to the older kids. And that’s the challenge — to get older kids back to the playgrounds."

We agree that something needs to be done to get older kids to playgrounds, particularly in a day and age when playground equipment is so "safe" (read: boring) that it holds little appeal for children older than seven. But are "video-game-like" playgrounds the way to go?

We're not so sure. While outdoor physical activity for children is necessary and good, it's even better when accompanied by a healthy dose of imagination. Beloved playground structures like slides, monkey bars, and swings invite children to make up their own games as they scamper, run, and climb. An electronic game, on the other hand, encourages a prescribed set of motions toward a prescribed set of goals.

Kids play enough video games at home. Instead of simulating the experience on the playground, can we find more imaginative ways to engage them by re-introducing elements of risk and whimsy on the playground?

Yay or nay? What do you think about electronic playground equipment?