5 reasons why parents need to play this summer 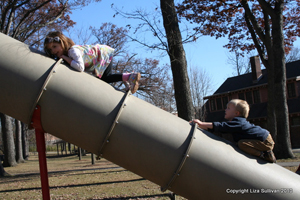 The summer of 2010 was a summer I will always remember—but not because of an exotic vacation or cross-country road trip or adventure-filled summer camp. Instead, I stayed right at home and explored local playgrounds with my twins. We were one of six families to participate in the first-ever KaBOOM! Summer Playground Challenge.

When the Challenge ended, I observed a marked change in my children – they appeared healthier, happier, stronger, and more self-confident. While everyone knows that outdoor play is  beneficial for kids, what I didn’t expect was how transformative the Challenge proved for mom as well!

Here are five reasons why parents should join the 2012 Playground Challenge:

As a gift to yourself and your children this summer, allow for plenty of time to play, and consider being a part of the national 2012 Playground Challenge!

The 2012 Summer Playground Challenge asks parents to visit playgrounds and add them to our Map of Play using our soon-to-be released Tag! mobile app. If you need another reason to join our Challenge, participants will earn points and badges toward great prizes throughout the summer and toward one of three Grand Prizes--a trip for two to Washington, DC! Sign up for more information here.

Kids say: Hands off our field!

A city council in Canterbury, UK plans to build housing on a beloved playing field, but neighborhood kids are saying, "Hands off!"

Orla and Timmy, ages 10 and 11 respectively, attended a recent city council meeting to take a stand. Orla said: "It's not just for me and my friends but for all the people of the area who live and breathe better because there is a lovely empty green field nearby."

Said Timmy: "Often in the evenings, I go to the field and play football with my dad and brother. It's very easy to stay indoors and watch TV or play computer games. Please leave our field alone." 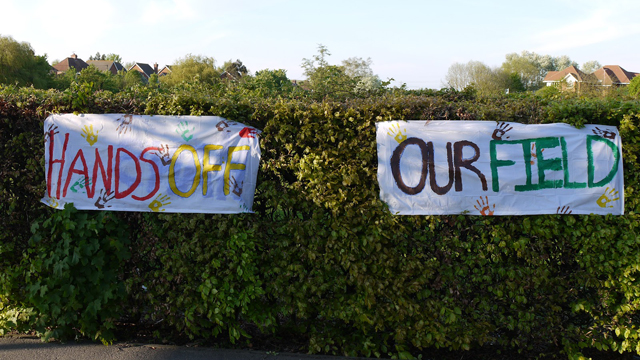 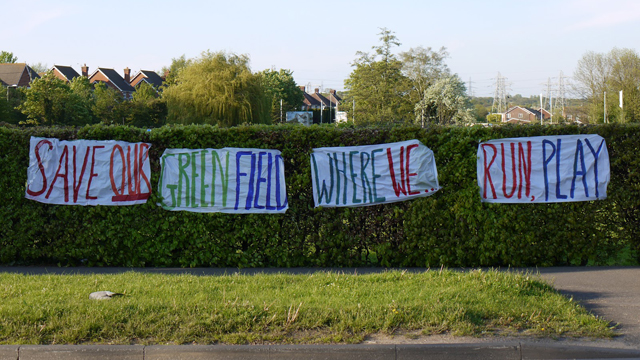 Council chief executive Colin Carmichael told ThisIsKent.com that neighbors were consulted about developing the field in 2004 when the plan was to build a primary school there. But the plans fell through and it was earmarked for housing instead.

Angry residents, who feel they were left out of the decision-making process, have gathered over 1,600 signatures on an online petition to save the field. The Canterbury City Council now has to delay its plans and refer its decision to an Overview Committee on June 13.

Let's pay tribute to the dedicated children and families who are stepping up to save play in Canterbury! Tweet your support to @kingsmeadfield and stay tuned for updates.

Photos via Save the Kingsmead Field. 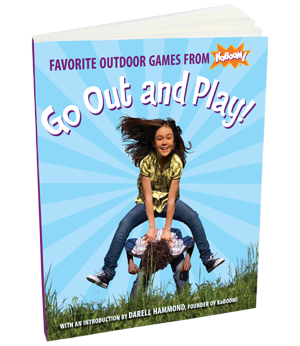 Last week, in honor of National Backyard Games week, we asked our readers to share outdoor games they invented as children.

As we read through your wonderful responses, it became clear that children and adults have different definitions of what constitutes a "game." Unlike most adult-invented games, the games you shared all had elements of challenge but no obvious winners or losers.

Congratulations to the inventors of our three favorite games, who will each win a copy of our new book, Go Out and Play! Perhaps we'll add these to our next edition:

Frixening
"We had a big willow tree in the backyard, on a hill surrounded by juniper bushes. We invented 'Frixening,' which required us to grab the willow tree branches and with a running start use them to swing out as far as we could over the prickly bushes without losing our grip and falling in. I have no idea where we got 'Frixening' from."
- Alice Requadt Marks

Mud Ski
"My little brother and I did all sorts of things with our swing set—but probably the greatest was when we could get our hands on the garden hose. We'd fill up the ditch under the swings with water, and wade around until it was good and muddy, then wrap the swings a couple times to get them to chest height and 'water ski' across the void. Many a good, filthy hour was spent that way. Getting hosed off by our mom before we were allowed inside was almost as fun as getting muddy."
- Maia Tel Sol Dei

Boss
"As children, my best friends and I would often play 'Boss.' Using a disconnected telephone in the basement, we would take turns making up calls we received from the Boss telling us about missions we had to go on for work (of course, we all worked at the same place!). These included anything from having to sneak by Mom barefoot to searching for treasures in the small creek in our yard to riding our bikes through make-believe trails we created in the neighborhood—and named after our favorite candy!"
- Margaret A. Powers

Want to see more of our favorite outdoor games? Donate $15 to get your own copy of Go Out and Play!

What backyard games did you invent growing up?

How many kids see "no running" signs at swimming pools and suddenly feel compelled to run?

We all know that kids don't like being bound by a rigid set of rules, prefering instead to bend or outright defy them. T-ball or pee-wee soccer can be a painful spectacle to watch, largely because the players don't understand why they can't run to another base whenever they feel like it, or why they can't pick up the soccer ball and throw it.

For kids, the best part of learning the rules to a new game is figuring out how to creatively adapt them. How many of you played "customized" versions of Red Rover or Capture the Flag? Or how many of you invented your own games from scratch, creating and revising the rules as you played?

In honor of National Backyard Games week, share with us a game you invented growing up in the "Comments" section below.

We'll feature our three favorite games on our blog and send the inventors a free copy of our new Go Out and Play! book, a collection of great outdoor games.

Leave your children at the park and your paranoia at bay 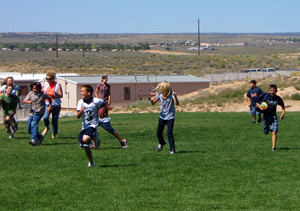 "Take Our Children to the Park... and Leave Them There Day" (Saturday, May 19) has a provocative name for a reason: to call attention to itself.

Had Free Range Kids founder Lenore Skenazy, who originally came up with the idea, named it, "Give Your Children A Chance To Gather Outside With Other Neighborhood Children and Engage in Unstructured, Unsupervised Play for an Hour or Two," I'm not sure that so many people would be taking notice.

Parental paranoia has risen dramatically over the last two decades. It's a trend driven by fear--fear of crime, fear of injury, and even fear of children growing up to be failures. Some parents, like Lenore, have decided that enough is enough.

The world has dangers, yes, but it is not the inherently evil, threatening place that we often make it out to be. As Lenore and others point out, rates of violent crime are lower today than they were in 1974, according to the Bureau of Justice Statistics, and have been steadily declining since the 1990s. Parents fret about child abductors while carting their children around in cars, even though kids are nearly 12 times more likely to die in a car wreck than they are to get kidnapped by a stranger.

And yet, people accuse Lenore of being "out of her tree."

All that she is asking, really, is that parents use their common sense. She is not issuing a decree that ALL parents MUST take their children to the park this Saturday and leave them there... or else! This day is really all about empowering, not endangering, children. Lenore is hoping that by making a big deal over leaving kids to play together at a park, it will, over time, cease to be a big deal.

As Lenore puts it,

Will you be taking your kids to the park... and leaving them there?

A longer version of this piece originally appeared on The Huffington Post.

Virtual funeral: Farewell to the slides at Union Grove

Friends in play, we are gathered here today to mourn the imminent passing of three dearly beloved playground slides. As longtime residents of Union Grove, Wis., these slides have brought joy to countless children who have reveled in their thrillingly tall ladders and periliously long snouts.

Alas, tomorrow's children will never enjoy such singular pleasures. In the name of safety (and, ahem, liability), the insurance company of Union Grove is seeing to it that our eccentric, rickety friends meet their demise.

Though not everyone is mourning the passing of our dearly beloved slides, even they admit that "kids are going to be sad." As are we. Not just for the children of Union Grove but for children the world over who are forced to contend with shorter, stouter, yawn-inducing slides. Tall slides of Union Grove, and tall slides everywhere, you will be dearly missed. Friends in play, we invite you to pay your respects in the "Comments" section below. 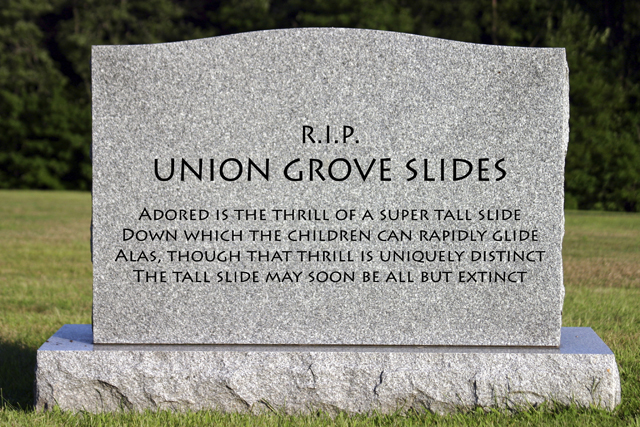 Where the wild playgrounds are: A tribute to Maurice Sendak

Maurice Sendak once said, "Children are tough, though we tend to think of them as fragile. They have to be tough. Childhood is not easy." He gave kids a lot more credit than we tend to these days, respecting both their resilience and their imaginations.

Many of today's playgrounds do neither, lacking both whimsy and risk. After receiving the Caldecott medal in 1964, Sendak said, "...it is through fantasy that children achieve catharsis. It is the best means they have for taming wild things."

In honor of Sendak, here are some of our favorite "wild playgrounds":

Check out our related post, Our favorite dangerous playgrounds.

For more inspiration, visit our Wacky & Wild Playgrounds Pinterest Board.

Want to pay tribute to Maurice Sendak? Earn your very own Maurice Sendak Tribute Badge by signing into our brand new Map of Play. By taking action for play now, you can help fuel children's imaginations for generations to come!

We talk a lot about allowing kids time for unstructured, unsupervised play, but we know there are other ways to play. We also support kids playing under the guidance of coaches, teachers, and of course, parents.

In fact, making time for family play is critical to family well-being. Playing with your kids can mean chasing them around the playground, challenging them to chess, or building sandlcastles together. But parents can also inject a playful spirit into routine chores and activities, like chopping veggies for dinner, shopping at the grocery store, or walking home from school.

Does your family need more play? This video, made possible by Foresters, will show you why it's important and how you can make family play a priority. Tell us how your family plays together in the comments section below!

Yes, it's Screen-Free Week, which begs the question: What are you doing in front of a screen?

But wait! Before you go, take a minute to get inspired by these creative outdoor activities from some of our favorite bloggers. For more awesome ideas, see our Screen-Free Ideas for Parents Pinterest board.

Why not turn a vacant house into a giant ball pit?

According to New Orleans artist Josh Ente, there's no reason why not. Abandoned houses denote ruin and despair. Ball pits, by contrast, are bright, happy places, full of gleeful children. Josh says that since Hurricane Katrina, the number of vacant housing units in New Orleans has doubled, and he, for one, is sick of seeing homes in his neighborhood left to slowly decay.

So Josh is taking action. Having successfully raised funds on Kickstarter, he is now busy renovating a vacant house and purchasing the raw materials. Learn more about his project here: