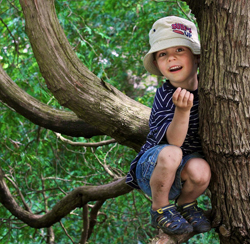 Would you let your kid climb a tree? What about jump off a roof?

Over the weekend, in light of our recent conversation about risk aversion, we asked our Twitter followers and Facebook fans about their favorite “dangerous” playtime activities growing up. There was a lot of gleeful jumping, climbing, and (almost) falling involved. Here's just a sampling:

We didn't just hang upside down on the monkey bars, we used to play "tag" and run across them like it was nothing. I don't think I could even step on one of them today - amazing how fearless children are!
- Stacy Towers via Facebook

Jumping roofs! Dangerous but fun. We jumped from house to house. In LA, they are built very close.
- @1AKA_VS via Twitter

Jumping off the roof of a ranch house garage into a pile of leaves.
- Eva Spera-Gauthier via Facebook

Um... climbing high into trees and jumping down... (we thought we could fly!).
- @hipmamasociety via Twitter

Falling out of trees. Luckily I was a bouncy kid.
- @WayfarerGlyn via Twitter

Riding my brother's bike down the hill. It was too big for me. I couldn't reach the pedals. I had to get off by riding onto the grass and going in a slow circle until it fell down.
- Deb Rennie via Facebook

Walking the rail on the railroad tracks. Who knew we were developing and training balance. We were having FUN!
- Youth Fitness Guy via Facebook

Running the gauntlet through the swings that my friends were swinging on. The best part of it was *almost* getting kicked, narrowly escaping!
- Kasia Swatek Kramer via Facebook

Biking down the long, steep hill in front of my house (age 6), no hands, no feet, no helmet and screaming my head off in glee.
- Move with Me Action Adventures via Facebook

What was your favorite "dangerous" playtime activity growing up?