What we can learn from a Hello Kitty space rocket 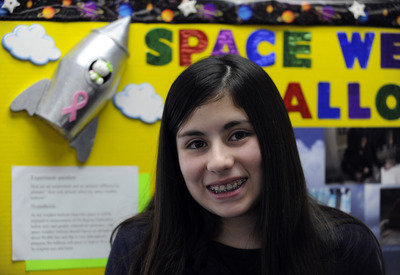 What do babies and scientists have in common? According to Laura Schulz, an associate professor of brain and cognitive sciences at MIT, they both go through “a systematic process of forming hypotheses and testing them based on observed evidence.”

Though child’s play is naturally compatible with scientific exploration, the United States is failing to nurture its little scientists. We rank 23rd in science among developed countries, diminishing our ability to compete in the global marketplace.

We obsess over test scores, but we should really be encouraging more students like Lauren Rojas (pictured above), a seventh grader in Antioch, Calif., who set out to test the effects of altitude on air pressure and temperature for her science fair project. And what better way to do that than to launch a homemade “rocket” into space using a do-it-yourself balloon kit?

Lauren added her own creative touches to the balloon, fashioning a shiny rocket structure that included a Hello Kitty pilot. "I liked her ever since I was 6 years old," Lauren told the New York Daily News. "My love for Hello Kitty has never gone away and I thought it would be really fun to add a toy inside the rocket." The doll got quite a ride, reaching an altitude of nearly 18 miles. As the balloon expanded to 53 times larger than its original size at takeoff, it eventually burst open, landing in a tree 47.5 miles from the launch sight.

You can watch the journey here:

Lauren was named one of four top award winners at her science fair and will go on to compete in a regional competition. While she learned an unforgettable science lesson on altitude, air pressure, and temperature, we stand to learn a valuable lesson too. Child’s play is not a ‘frivolous’ activity that distracts from ‘weighty’ subjects like science and math. Rather, it is a core component that we must nurture from pre-K to high school—and beyond.