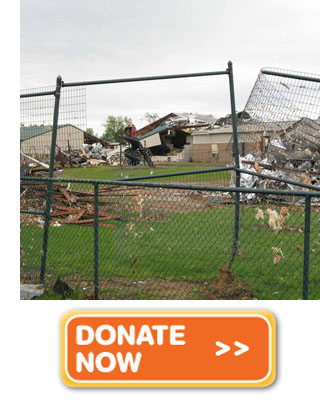 In the tornado-ravaged town of Moore, Okla., all people want is for things to return to “normal.” What does “normal” mean? Adults no doubt crave the comfort of their own beds, a running refrigerator, a hot shower. But for kids, “normal” might be as simple as a chance to play.

In the wake of disaster, we must meet our children’s basic needs – food, shelter, water – but it’s not enough. For children whose lives have been turned upside-down, play is absolutely essential for maintaining a sense of stability amidst turmoil and helping them to work through emotional trauma. That’s because play is simple, familiar and joyful – all the things that adversity is not.

It’s easy to push play down the priority list, but luckily child-serving organizations around the world understand its healing power. After Hurricane Sandy, the international nonprofit Save the Children set up safe play areas in shelters “where hundreds of children can be kids again.” After the 2011 tsunami earthquake in Japan, World Vision created child-friendly play spaces because they considered “emotional support to be just as critical as physical assistance for vulnerable children who have experienced disasters.” And when it came to aiding the children affected by the 2010 earthquake in Haiti, the Clinton Global Initiative found that play was “one of the best medicines.”

Play is a critical component to both immediate and long-term rebuilding efforts. In 2005, KaBOOM! committed to building over one hundred playgrounds in the Gulf following Hurricane Katrina. We ended up building 143 (and counting). Kathleen Koch, author of Rising from Katrina, noted that adults “were busy trying to replace physical objects--lost homes, cars, and possessions. [But] there was nothing anyone could do to recapture a lost childhood.”

At one of the Gulf sites where we built a playground – a school in Kiln, Mississippi – the principal reported:

The psychologists in our area have been doing studies on kids in the schools in our district, and they reported seeing things… like thoughts about suicide, murder and other types of violence – truly terrible things. But, they also reported that they didn’t see those things in the kids at North Central Elementary and they attribute a lot of that to the playground.

Similarly, when KaBOOM! joined forces with the town of Joplin, Missouri to build a playground there 16 months after a tornado devastated the area, Superintendent of Joplin Schools CJ Huff noted that talk of suicide decreased. "Playgrounds are a critical component to the infrastructure in any community," he said. "We also found playgrounds were really a place of reunification in the aftermath of the tornado and a meeting place for children who hadn’t seen each other since the storm."

Just a few weeks ago, we helped to rebuild Magnolia Park in the City of Long Beach, which had been destroyed by Hurricane Sandy. Long Beach resident Ryan Spel said, “What a great experience, [it] meant a tremendous amount to me be part of rebuilding my hometown… I will never forget it.”

Back in 2006, KaBOOM! supported a playground-building effort at Plaza Towers Elementary School—one of the two schools demolished by the tornado. As we work on a long-term plan to contribute to the rebuilding efforts of Plaza Towers and the town of Moore, let’s support the organizations on the ground that are seeking resources to address the community’s immediate needs. Save the Children is coordinating a response effort for affected children and families; please support its worthy efforts by making a donation today.

It’s all too easy to forget that kids bear the stress of their families: lost jobs, lost homes, lost lives. Getting outside and having the opportunity to run, laugh, and play is essential—because all children deserve a childhood. Even when faced with trying external circumstances beyond our control, it is our responsibility to ensure that they don’t miss out.