What to do with bored kids this summer

Boredom. Kids hate it, and parents hate hearing about it.

So we turn to sports camps. Video games. Amusement parks. But do we have to “fight boredom” with an endless chain of activities?

In fact, some boredom can be good for your kids. It essentially tells them: Figure out something to do. Use your imagination. Newsweek notes, "In the space between anxiety and boredom [is] where creativity flourishe[s]."

Professor of Social Psychology Paddy O'Donnell points out in The Times, "Boredom shouldn't last long if children are in the right environment where they're dragged off either by curiosity or the desire to socialise. It continues only if there's no one to play with or the environment's too restrictive."

Of course, there's nothing wrong with a week of sports camp, an occasional video game, or a trip to the amusement park, but instead of constantly conjuring up activities to wage war against boredom, think about how you can foster the “right environment” and how that environment can include other kids.

Creating these environments at home, on your street, and at your local park or playground may require some initial legwork, but will save time and headaches down the road. You can relax, bring on the boredom, and watch your child's creativity flourish!

Here are five ideas to ensure that your kids make the most of their boredom this summer: 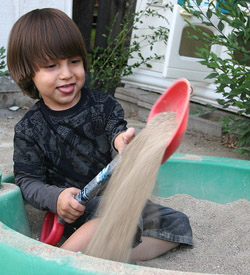 Bring the beach to your kids

Can't get to the beach? Bring the beach home. If you've ever watched your child effortlessly wile away an afternoon digging in the sand at the water's edge, then you know how much they love manipulable environments where they can tinker, explore, create, and destroy. Consider these affordable DIY sandbox and sprinkler ideas. 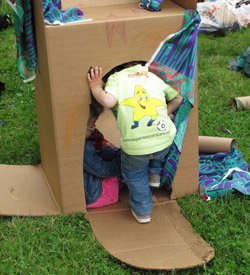 A pop-up playground can pop up anywhere -- a back yard, front yard, garage, or sidewalk.The best part? It doesn't have to cost a dime. While it may be difficult for adults to envision the play opportunities presented by, say, a cardboard box, paper towel roll, or stack of newspapers, children will inevitably turn scrap materials into their own magical kingdoms. 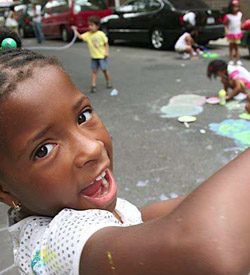 Close a street for play

Does your house or neighborhood have limited outdoor space? There's always the street. By petitioning a city to close a residential street to cars at a regularly scheduled time, a community gets an "instant playground," even if it lacks swings and monkey bars. Transportation Alternatives, a New York-based nonprofit, offers a handy PDF guide to help you set up your own play street. 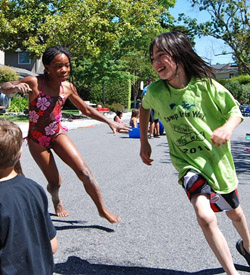 Want to make sure your kids get a summer camp experience full of free play opportunities? Start your own camp, then—on your own street. Inspired by Playborhood founder Mike Lanza’s Camp Yale, neighbors Jennifer Antonow and Diana Nemet have been running Camp Iris Way for two summers now. Last year, the camp attracted a whopping 72 children and teens—more than 90 percent of the youth in their neighborhood! Jennifer and Diana offer six simple steps to starting your own camp, insisting that it's not nearly as daunting as it may seem. 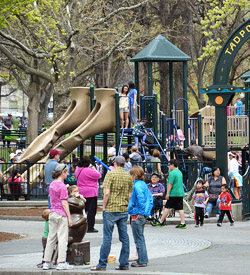 Challenge your neighbors to get to the playground

For three summers now, we have challenged families to visit as many playgrounds as they can. Tired of seeing so many empty playgrounds, Playground Challenger Liza Sullivan decided to take our Challenge one step further by inviting her neighbors along. The Last Days of Summer Park-A-Day Challenge gave families one park or playground destination each day for one week.

What ideas do you have for making the most of boredom this summer?