These playgrounds are for babies! 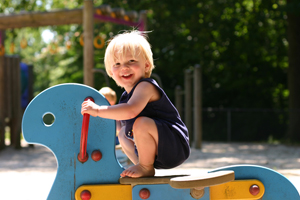 We recently received this note from Bridget, a concerned parent who is having a hard time finding playgrounds that stimulate and challenge her 10- and 11-year-old children. We're hoping our readers can help her out! Here's Bridget:

I came across your website and blog via a link from our kids' school. They are raising money to build a new playground to replace the old playground.

I'm worried because every single playground renovation in our town so far has taken a playground that was fun for lots of kids and replaced it with a boring, plain vanilla metal structure that is uninteresting for anyone older than seven. My kids are 10 and 11 and they are extremely upset that the really cool wooden structure is coming down, because "they're just going to replace it with another stupid tot lot" (their words).

I would love to get involved with the playground renovation, but I refuse to donate money to an enterprise that is going to put up a boring metal structure. A different parents' group in town did this a few years ago -- raised money for a playground that was supposed to be designed for older kids. When it finally arrived, it was apparent that their idea of "older kids" was maybe five year olds. My kids went to the new playground (and they were about seven or eight at the time) and basically said, "That's it? What a rip off!"

Do you have resources that one could point the committee to say, "This is a good structure for kids older than seven?" Also, is there any reason why the really awesome wooden playgrounds don't get built anymore? They're always the best, but they seem to be a rapidly vanishing species. When the really great one in the center of our town came down (mostly due to paranoid parents calling it dangerous because kids occasionally got splinters) my kids basically stopped going to playgrounds because there is nothing to do there -- "the structures are for babies!"

I really want to fight this trend. What can I do?

Do you have advice for Bridget?