Saving childhood with a repurposed ambulance, an underground playground, and big blue blocks

All children deserve a childhood. But when faced with external circumstances like illness, war, natural disaster, or extreme poverty, some children risk missing out on the simple joys of running, laughing, discovering, and creating.

As our CEO and Founder Darell Hammond recently pointed out in the World Economic Forum blog: “For a child whose life has been turned upside down, play is absolutely essential for maintaining a sense of stability amid turmoil and helping to work through emotional trauma. This is because play is simple, familiar and joyful – all the things that adversity is not.”

The right to play is universal. Here are three innovative initiatives that are bringing play to children most in need:

In Deir Ezzor, Syria, citizens have set up an underground school and play area to help children cope with the stark realities of war. Before the school opened, 12-year-old Sultan Mussa told the Al Arabiya News, “I spent the whole day closed up at home because my parents were afraid of the bombing and wouldn’t let me go out.” Says principal Beda al-Hassan, “This isn't the sort of life children should have.”

The school holds classes in the evening, when it is less dangerous for children to venture outside, and though its students are unable to play outdoors, they can use the toys, ping pong table, and chess boards to reclaim their childhoods. Ten-year-old Sidra likes coming to school “because I can play here. My house was bombed and I lost all my toys.” The principal’s five-year-old son Qutaiba says, “I can't wait for school to end and for play time to begin.”

In Blantyre, Malawi, a hospital is harnessing the healing power of play by offering its patients an ambulance-turned-playground. The ambulance, repurposed by a pair of Dutch designers, sports a slide, swing, monkey bars, clubhouse area, and fireman’s pole. It is handicap-accessible so that the hospital’s wheelchair-bound patients can play alongside other patients and children from the neighborhood. 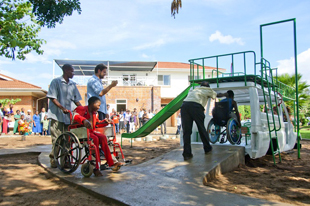 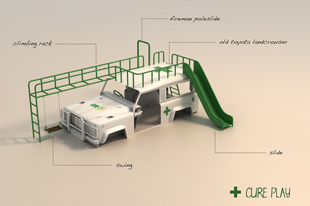 Lastly, the P.L.A.Y. initiative, a pilot program created by UNICEF and supported by our national partner Disney, brings our portable Imagination Playground™ units to children living in disaster-recovery conditions and extreme poverty. Recently launched in Haiti and Bangladesh, the initiative helps kids living in challenging circumstances to reconnect with their childhood, and return a sense of normalcy to their daily lives. See Imagination Playground™ in action:

Whether in the United States, Syria or Haiti, kids intuitively understand the importance of play. We just need to make sure that we’re giving them the time and space to be kids.