Relax... It's okay to get a little dirty!

In November KaBOOM! launched its first guest blogging contest, asking parents to muse about their experiences with play. We received lots of entries, and while it was tough, managed to narrow it down. Over the next ten weeks we will be publishing the top ten, and we hope you enjoy reading them as much as we did! Congratulations to all of our winners. In 3rd place is Angie Six from Indianapolis, Indiana… 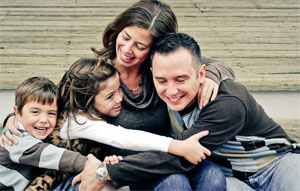 "Get down before you hurt yourself!"

Years ago, these were the things a kid would hear when they were getting too rambunctious for indoor play. My mother put up with a lot inside the house, but when we started climbing the walls she had the good sense to send us outside.

The rules for outside play were simple: stay close enough that we could hear our mothers yell, don't do anything that might get you killed. Given that kind of freedom, we spent hours playing outside and doing things that involved climbing, all kinds of mess, and a few injuries.

Fast-forward to the play time of today and you'll find rules aplenty. I don't have the same surroundings to send my children off on their own, so when they need to burn off energy we visit local playgrounds. My rules are nearly as simple as my mother's: stay near, be nice, and don't do anything that might get you killed. It's everyone else's rules that are killing the fun for today's kids.

The ravine my kids gravitate to because it's swampy and fun? The other kids get scolded for joining in. "You'll get dirty," the parents say. "We came here to play on the playground, not in the dirt." The sticks my kids use to build shelters? "Put that down! You'll put an eye out!" It's the looks I get when I let my kids climb a tree or stand on top of the monkey bars that's sharp enough to put an eye out.

I never imagined I'd be that mom, the one who the others judge for being too lax. I'm strict about sweets, I'm cranky about what they can and can't watch on TV. Compared to my own childhood, my children are far more micro-managed in every aspect of their day.

That's why it's so important to me to leave them be outside. Yes, they get dirty. Yes, I see them climbing and think about insurance deductibles. That's my job. It's also my job to step back and let them play. Dirty clothes can be washed. Balance and good judgement can only be learned by testing boundaries and, yes, sometimes falling.

It's hard not to feel self-conscious and turn into a helicopter parent. I resist, though, in hopes that there will be another parent there, watching. Perhaps their gut tells them the same as mine - that children need this, that kids inherently know what's okay and what they're capable of. Maybe they have just a smidgen less confidence than I do after nine years of parenting. Watching me give my kids freedom to play without the weight of so many rules may be just the thing they need to see so they'll feel okay with a less involvement.