Back in August, we wrote about the lunacy of an increasingly popular ban on unaccompanied adults at playgrounds. Well, we are sad to report that the lunacy continues. The New York Police Department has ticketed seven adults at Inwood Hill Park because they were visiting the play area without a child in tow.

And how were these adults threatening the safety and well-being of young Inwood residents? By playing chess. That’s right, these menaces to society were taking advantage of the outdoor chess tables near the playground, and some had even been known to corrupt local children by teaching them this dangerously mentally stimulating game.

Cheekiness aside, to quote our earlier post on the subject, parks and playgrounds should be multi-generational multi-use spaces for everyone to share and enjoy. We should see couples picnicking, teens playing sports, parents socializing, kids playing—and yes, adults and children playing chess! In an ideal world, we should know these couples, teens, parents, kids, and chess players, because they are neighbors and because the playground is a prime community gathering spot.

According to DNAinfo.com, Inwood residents were outraged that “the NYPD would target the chess players in light of the men's history as caretakers and teachers for the next generation of Inwood chess players.” Now these seven caretakers-turned-criminals must appear in court three days after Christmas, on Dec. 28. Happy holidays, from the NYPD. 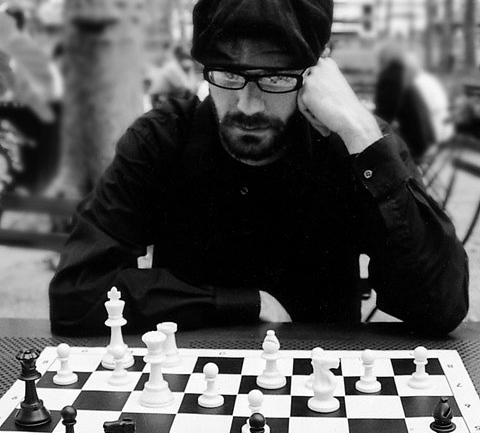 Is this man plotting an abduction or pondering his next move? Photo by Jeffrey Barke (cc).

UPDATE: In response to a public outcry, the New York parks department has installed picnic tables for adult chess players, which are separated from the playground by tennis courts. Now it's BYOB (Bring Your Own Board). We're glad the parks department is making an effort to accommodate the chess players, but we still contend that playgrounds should be multi-generational and multi-use. What would it take to repeal the ban on unaccompanied adults?