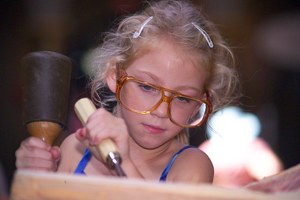 Whether inventing a recipe, building a club house, or sewing a rag doll, kids love to make things. Not only do they get to learn for themselves what works (and what doesn't!), but they get to enjoy and show off a tangible product at the end of it.

The Maker Movement, which has been gaining ground in recent years, is as much for kids as for adults. In fact, Phillip Torrone of Make Magazine believes that "the Maker Movement belongs to the kids now." He says that for the kids he meets these days:

...the idea of making things, taking things apart and sharing has not been something new, it’s something that’s always been there for them. The average maker isn’t just a 35 year old guy, it’s becoming a 10 year old girl or boy with a 3D printer.

Get your kids started at one of the many family festivals geared toward hammer-wielding children. This Saturday, Sept 22 in Washington, DC, the National Building Museum is hosting The Big Build, where kids can build a brick wall, construct a log cabin, carve stone, compete in a nail driving contest, and play with huge foam blocks in Imagination Playground (provided by yours truly!).

Next weekend, September 29-30, is the World Maker Faire, a "family-friendly festival of invention, creativity and resourcefulness" in New York City. Mini Maker Faires are happening all over the country (and globe!) -- find one near you here. The National Building Museum is also hosting a Discover Engineering Family Day in February.

It's time to break out the toolbox, open the craft drawer, rummage through the pantry, and start making!