In November KaBOOM! launched its first guest blogging contest, asking parents to muse about their experiences with play. We received lots of entries, and while it was tough, managed to narrow it down. Over the next ten weeks we will be publishing the top ten, and we hope you enjoy reading them as much as we did! Congratulations to all of our winners. In 6th place is Connie Krebs from Lakewood, Ohio… 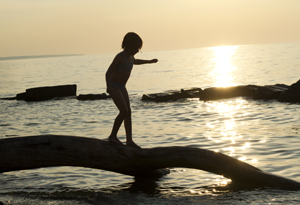 As a parent you want your children to be safe, but it seems to me that parents today are taking this mantra a bit too far. All across the country phrases like, "Stop running!" and "Don't climb that, you'll get hurt!" are being said in parks and places where children are meant to run, play, climb, dig, and fall.

I was sitting at the park watching my two oldest daughters climb and yell to their heart's content, playing games with other children and digging in the mud left from the last rain. Next to me was a mother who had a son about three years old. She was in the little boy's face, telling him what to do and what not to do. "Kyle, come slide down the slide! No, put down the wood chips, come over here and slide so I can take your picture. Kyle, come here!!! Put the stick down, you will get hurt…." It went on and on, becoming an annoying drone that poor little Kyle chose to ignore, to which his mother responded with even more demands. I so wanted to tell that mother to just let her child be, to let him pick up the stick or wood chips, that dirt washes off, and everything would be ok. 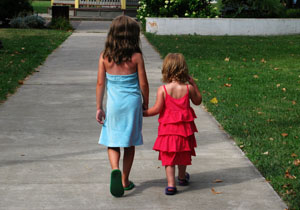 I remember as a child playing Red Rover with the neighborhood kids. I was tiny for my age so I was almost always called over – the kids liked seeing me flip over their well-linked hands I guess. Memories of playing hide-and go seek throughout the neighborhood, mastering the monkey bars, getting propelled off the see-saw... these are things that enhanced my childhood and taught me many life lessons. (One being, hiding in poison ivy is definitely not a great idea!) It worries me to see so many children deprived of the freedom to just play. When do they get to run and shout? How are they going to learn the lesson of perseverance if they aren't allowed to at least try?

I am not asking that parents ignore their child or not stop them from doing something that is really dangerous, like playing in a busy street. There is a distinct difference between neglect and keeping a distant but watching eye on your child while letting him or her have some freedom. I beg fellow parents to just take a step back and savor the experiences that natural play has to offer. You will be amazed at what your child can do, what they enjoy. They will gain so much more than if you try to direct their every move. Please, just let them play!