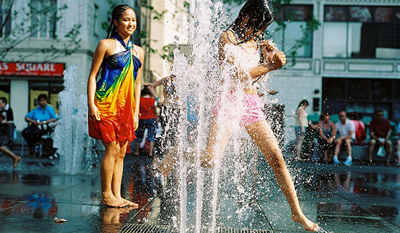 Following his recent visit to the World Economic Forum on East Asia, our CEO and Founder Darell Hammond reflects on the global economic benefits of play:

What is the world’s most vital resource? It’s not oil. It’s not gold. It’s our children. As acclaimed economist Jeffrey D. Sachs puts it, “Investing in the health, education, and skills of children offers the highest economic returns to a country.”

The earlier we start making these investments, the better. According to UNICEF, “Early childhood represents a unique window of opportunity for investing in children’s cognitive and physical development.” While these investments should cover a wide range of needs, there is one need we often overlook: play.

We all know that play comes intuitively to children, but few of us are aware of just how vital it is to their development. Dr. Sam Wang and Dr. Sandra Aamodt, who have researched how play enhances brain development say, “the 19th-century kindergarten movement, which popularized the concept of preschool education, was based on the idea that songs, games, and other activities are a means for children to gain perceptual, cognitive, social, and emotional knowledge that prepares them for entering the world.”

We often hear about the successes of Chinese and Japanese students, who earn top science, reading, and math scores in the international PISA exam, but less discussed is their “playful and experiential… approach to schooling before second grade.” Even in later years, many students in China and Japan received short play breaks every 50 minutes.

A case study from Germany reveals just how important play is for a young child’s future success. In the 1970s, many of the country’s play-based kindergartens were transformed into “centers for cognitive achievement.” Longitudinal research comparing 50 play-based centers with 50 cognitive achievement centers found that by age ten the children who had played in kindergarten “were more advanced in reading and mathematics and they were better adjusted socially and emotionally in school. They excelled in creativity and intelligence, oral expression, and ‘industry.’”

But do these investments pay off? According to Science Daily, a longitudinal study revealed that "for every $1 invested in a Chicago early childhood education program, nearly $11 is projected to return to society over the children's lifetimes."

Increasingly, our world economy depends not just on productive workers, but on creative ones. An IBM survey of more than 1,500 CEOs from 60 countries and 33 industries worldwide revealed that the single most important trait, “more than rigor, management discipline, integrity or even vision,” to successfully navigating an increasingly complex world” is creativity. In his extensive research on innovation, educator Tony Wagner “identifies a pattern—a childhood of creative play leads to deep-seated interests, which in adolescence and adulthood blossom into a deeper purpose for career and life goals. Play, passion, and purpose: these are the forces that drive young innovators.”

Around the world, play opportunities are disappearing, and countries are paying the price. Literally. Society pays the cost of remedial help, public benefits, medical care, and even incarceration. Meanwhile, we are hindering our world’s next generation of innovative thinkers and business leaders.

Most tragically of all, our children are missing out on the childhood they deserve. Depriving them is a grave moral failure—and one that we simply cannot afford.

Photo by Smaku (cc). A version of this post originally appeared on the World Economic Forum blog.