If kids played more, would they have fewer temper tantrums? 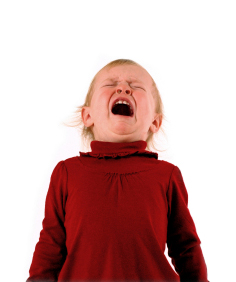 Do adults these days have less patience, or are kids more "bad" than they used to be? In light of the recent flurry of articles about the rise of the "no kids allowed" movement—which has included kids being banned from restaurants, airline flights, and even grocery stores—we can’t help but wonder to what extent the growing Play Deficit is responsible for the perceived rise of temper tantrums and other disruptive, insolent behavior amongst our nation's little ones.

It’s no secret that a lack of play is linked to bad behavior. Studies have shown that schools without recess, for example, struggle with more behavioral problems in the classroom, including violence and emotional outbursts, and that their students show a lack of ability to interact with peers and authority figures.

We asked our Park-A-Day Challengers if their regular visits to parks and playgrounds this summer have spurred any changes in their children’s behavior. Our 2010 Park-A-Day alumnus Liza Sullivan previously advised this year's Challengers that kids who play more "won’t be as squirmy at home and will rarely have trouble falling asleep at night!" Here's what a few other Challengers had to say:

playparks:
"I had an interesting experience this week because both kids were in camp. My nine year old was outside from 9 a.m. to 4 p.m. everyday. My six year old played lots of games outside, but also experienced one day that was heavier on classroom time. On our drive home, she said, 'Mommy, can we stop at a playground?' I was like, 'What? You just spent seven hours at camp!' And she complained they'd been inside too much that day. I was amazed she knew herself well enough to know she needed to hang out outside. So we got home and she played outside in our homemade sandboxes for over an hour while I got dinner ready."

PortlandDad:
"Whether it's the park or getting out for a bike ride, by getting the boys active I see a change in behavior. That activity is usually tied to greater engagement from me and those two things contribute. Having one without the other wouldn't be enough."

floridamom:
"My boys have been involved in organized team sports since each was five years old and since I don't work they have plenty of 'play' time at home. What I've noticed is that there were many more serious behavior problem kids (all boys) in kindergarten this year than the older two ever had in any grade."

Have you noticed a link between your child's behavior and how much they play? Do you agree that kids aren't as well-behaved as they used to be?