Going Dutch! Why Dutch kids are the happiest in the world

Originally from New York, Linda Ravin Lodding has spent the past 15 years in Austria, Sweden, and now The Netherlands, where she lives with her family in a one-windmill town. She is a working mom, shutter-bug, yoga class drop-out, cheesecake lover, hula-hooper, dreamer, and author of the wonderful children's book, The Busy Life of Ernestine Buckmeister. Here, she reflects on the child- and play-friendly culture she has encountered in her new home:

When my family first moved to the Netherlands, four years ago, it wasn’t just the quaint windmills dotting the landscape that tipped me off that we were living in a foreign land. Nor was it the tractor-wheel-sized rounds of cheese in our village shop. It wasn’t even the picture postcard views of tulips ‘ribboning’ through the fields. No. It was the children – biking, running around, and freely playing outdoors.

Let me explain. When we first arrived in The Netherlands, we decided that we’d “go Dutch” and cycle everywhere. My then nine-year-old daughter was keen. Her school is only a stone’s throw up the street – but it is a busy street with a tricky roundabout . To complicate matters, there are so many cyclists on the bike path that it feels like the Tour de France. So, naturally, I strapped a helmet on her head and off we cycled – together.

It was soon very evident (especially to my daughter) that no other parent was biking with their child like a Mother Goose making way for her gosling. Dutch children were biking by themselves -- and not only to and from school. They were biking to the town, to their friends’ houses, to the beach, to their sports activities. I’d see children on bikes and wonder, where was the adult? Granted, kids here are basically born on bikes, but weren’t their parents worried that their little ones would get lost? Side-swiped by a bus? Plucked off the street by a pedophile?

Obviously Dutch parents didn’t have such concerns. Or, if they did, they decided to not let them get in the way of embracing a free-range childhood.

As a friend of mine said, “The dangers have always been here – it’s no more or less dangerous today than it has ever been in Holland, yet parents, on balance, opt to give their kids freedom and independence.” And she, like many Dutch parents, thinks this attitude leads to happier, healthier and more resilient children.

She may very well be right. A 2007 UNICEF study found Dutch children to be the happiest among children in the 21 industrialized countries surveyed.

That well-being seems to be cultivated at a young age through parents, schools and communities. “I want for my child the same kind of playful childhood that I had,” another Dutch friend of mine told me. “I tell my children to go out and play and not come home until their pants are ripped!”

Communities are also on board – especially as childhood obesity is on the rise here in The Netherlands. In an effort to reverse that trend, nearly every Dutch child is engaged in some sort of physical activity. As American schools slash recess and P.E. to make time for more sedentary classroom instruction, Dutch schools provide half-days every Wednesday so kids can pursue sports.

What else explains why Dutch children so happy? Play!

You only have to look at the painting, “Children’s Games” painted by Pieter Bruegel, the Elder over 400 years ago, to see that children in this region have been engaged in independent play for centuries. 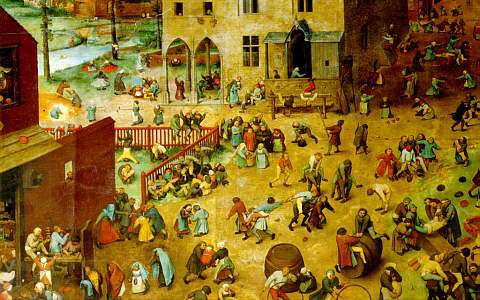 And, today, Holland has an abundance of play facilities for children – from construction playgrounds to water playgrounds to natural playgrounds. Just take a look at this Dr. Seuss-inspired playground, featured previously on Play Today, in Hoenderloo, in Netherlands' Landal Miggelenberg park. 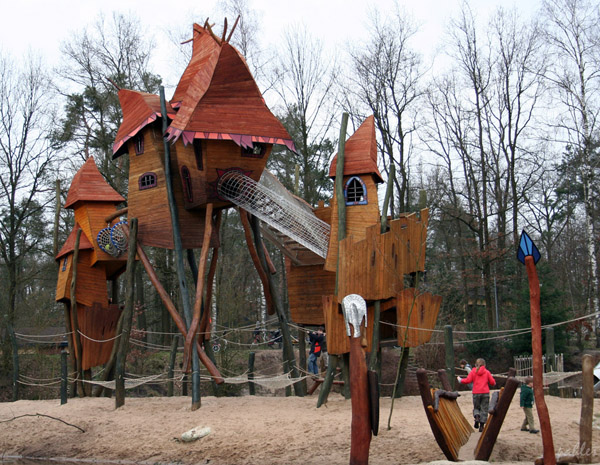 So, I’ve been trying to “go Dutch” in more ways than one.  Beyond eating Gouda and tiptoeing through the tulips, I now let my daughter bike to school by herself and ensure that we all make time to lighten up a bit and to play.

Don't miss Linda's book! Read about The Busy Life of Ernestine Buckmeister, whose "well-meaning busy parents have packed her after-school hours, turning Ernestine into the over-scheduled poster child of today. But Ernestine is about to opt out and do what no Buckmeister has ever done before: just PLAY."