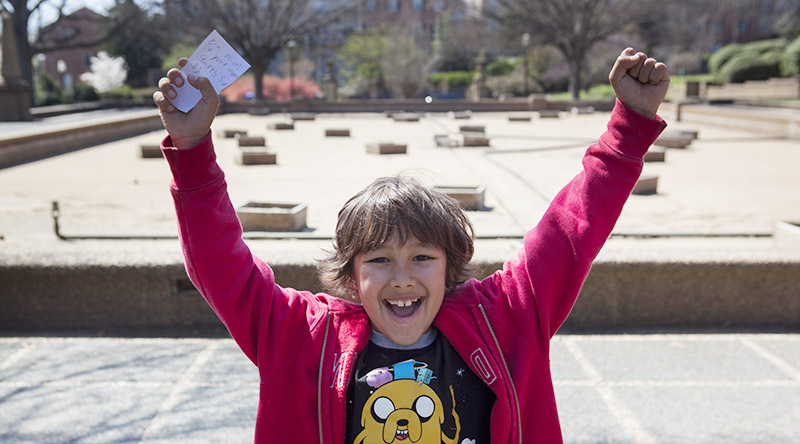 Enjoy this guest post from our friends at Doozy, a life-sized board game that inspires people to get outside and create their own play, about the importance of creative and imaginative play!

When did you last play a game - at a social event, on the bus, at work? Now really think, when did you last let yourself go, make things up and build creatively with others? We want the latter to be more than a distant memory. The harsh reality is that people are spending, on average, more than 7 hours a day in front of a screen, and most play and entertainment now involves a screen too.

Our mission is to inspire people to get outside and create their own play through the framework of a life-sized board game. Doozy lets you be your own game piece and flex your creative muscles as you hop from space to space completing challenges with other players.

So how does it work? You take the circular spaces and create any closed loop of your choice (the goal is to get back to the start). You roll the die, go to the next space of that color, draw a card, and you do what it tells you to do. The card challenges might ask you to grab a partner and “wheelbarrow” around the board, switch shoes with someone, or even act like a taco!

But what really sets Doozy apart is that you have the power to change the size of the board, the rules of the game, and the challenges that fuel it. We trust you to bring your own quirks and ideas to Doozy and customize it to your playful needs. As players become co-creators and invest themselves in the game, they inherently internalize Doozy’s larger message and make more time for play in their daily routine, high fiving co-workers, getting outside for lunch, and being that much more playful.

When we introduce Doozy, we use the word framework because ultimately it’s not about the game itself but rather the idea that Doozy can be a bridge; a bridge between the prescribed play of a digital age and the kick-the-can, baseball-meets-freeze tag experiences we had growing up; a bridge between caring adults and children, bosses and employees, new friends and old. The idea that players are creators is reinforced by the rewards of our current Kickstarter campaign, where you can simply take the idea and run with it, download and print the cards, make the spaces, or have it all manufactured and delivered to your doorstep. Because ultimately, we won’t be the ones to design Doozy 2.0 – you will!

We want to spark a movement but we can’t do it alone. Let’s set an example so this generation of kids grows up with the balanced and active play they need to thrive. We want to see kids growing up differently: talking with that other person in the elevator, moving their phones a little further away from their bed, and spending more time playing than in front of the TV. With your help, we can bring play back for kids and adults!