Do your kids get enough boredom? 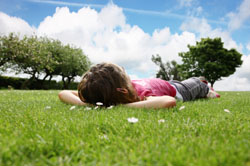 In an era of constant stimulation, boredom has become our children's worst enemy. A long car ride without the distraction of a screen is unfathomable. Unscheduled summer days are few and far between. Schools fight boredom with hours of homework and after-school sports; meanwhile, parents wage their own war by arming their homes with electronic stimuli.

But is boredom really a bad thing?

Scott Adams, creator of "Dilbert," doesn't seem to think so. In his recent Wall Street Journal article, he argues:

"Experts say our brains need boredom so we can process thoughts and be creative. I think they're right. I've noticed that my best ideas always bubble up when the outside world fails in its primary job of frightening, wounding or entertaining me."

Bestselling author Mitch Albom agrees. Lamenting our children's increasingly busy summers, he calls on parents to "lighten it up."

"Sometimes doing nothing is doing something. Sure, camp can be fun, and travel ball is exciting, but if we cram in activities from the last day of school to the first, we’re ignoring an important fact: The way kids work during the academic year—honestly, you’d think homework was a full-time job—a mental break may be needed. These are young minds, young bodies. Replenishing the juices by kicking back is not a bad idea. And if not in childhood, then when?"

Our own CEO and Founder Darell Hammond echoes Adams' and Albom's sentiments in his Huffington Post piece, "In Defense of Boredom":

"Adults are cramming as much as they can into their children's days under the misguided notion that boredom is a bad thing. Then, in the precious hours of free time they have, kids turn to TV, computers, and video games to keep themselves entertained. The result? A generation of kids who are adept at following rules -- whether in a classroom, on the soccer field, or on their PlayStation -- but who are at a complete loss when it comes to innovating, designing, tinkering, or doing anything that requires drawing from their own imaginations."

Has our over-stimulated, over-scheduled culture created a generation of children who don't know how to be bored? What can parents do to help their children learn the joys of boredom?