Do kids these days have more common sense than adults? 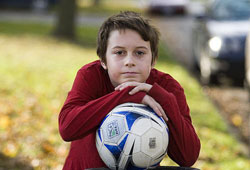 When kids must teach adults the difference between a rational and irrational decision, you have to stop and wonder what’s going on.

In St. Catharines, Canada, 10-year-old Mathew Taylor (pictured left) stepped up to reverse his school’s decision to ban all balls—basketballs excluded—on the schoolyard during recess. The ban was imposed after one child got hit in the head by a soccer ball, even though according to Mathew, “she was back in class shortly after the incident.”

After “some boring recesses,” Mathew decided to take action. He collected 95 signatures for a petition, researched childhood obesity data online, and met with the school principal. His impressive and persuasive efforts led her to reverse course and once again allow soccer balls, footballs, and tennis balls on the school field.

It’s heartwarming to see Play Heroes like Mathew stepping in to save play. He instinctively understood that the decision to implement the ban was driven by paranoia and did not serve the best interests of his schoolmates.

But the fact that 10-year-olds are teaching school administrators about common sense is worrisome—to say the least. Would we rather see kids running around during recess, refining their gross motor skills, learning about teamwork,  and incrementally challenging themselves? Or would we rather see them sitting around?

Knee-jerk reactions to relatively minor injuries on the schoolyard may or may not stave off lawsuits, but at what cost?