From couch potato to varsity athlete 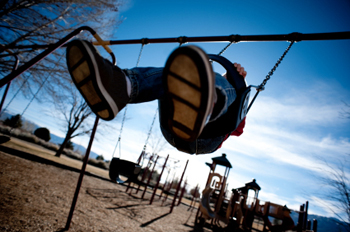 Some say play is frivolous. Jill Mays, an occupational therapist, knows perhaps better than anyone why—and how—play is absolutely critical to children's learning, development, and emotional well-being. We think one of her former patients would agree. Read on:

I first met Jack when he was in preschool and worked with him for several years. A chubby blonde who was happiest curled up on the couch and browsing books about lighthouses, Jack had trouble with everyday activities, like getting dressed. When there was a lot of noise or activity, he became easily overwhelmed and would shut down almost entirely, unable to say or do anything.

Jack had sensory processing disorder and a learning disability. ‘Sensory processing’ refers to our ability to determine what sensory information to pay attention to and then how to handle and react to it. For most people, this process takes place on a largely unconscious level and in milliseconds. Our brains are amazing things!

Movement is critical for activating this system, but with low core strength and poor coordination, Jack fatigued quickly. Our work initially focused on strengthening and building his endurance. As Jack moved into first grade, the emphasis shifted to coordinating his body movements. By the middle of first grade, he reached a tipping point when he learned to “pump” on a swing. At recess, Jack would charge out to the playground, making sure he reached the swings before his classmates. His teacher had never seen him run before.  Jack spent the entire recess swinging.

His motor abilities grew exponentially from that point on. Not only that, his teacher noted that his recess swing sessions helped him focus better in the classroom and improved his learning. Many years later, I read in the local newspaper that Jack was on the high school varsity football team! From the day I met him, he had progressed from a lone couch potato to a lone swing enthusiast to a team player in a physically demanding sport—a moving testament to the power of play.

This story is adapted from an excerpt in Your Child’s Motor Development Story by Jill H. Mays. See Jill's other guest post, In the wake of tragedy, six tips for coping through play.