When one of our favorite bloggers emailed to ask if we were interested in a guest post on a "hidden bicycle playground," we were intrigued, to say the least. Alex, tell us more!

Admittedly, as you may know, I have mixed feelings about playgrounds that are created because we have not designed our streets or public spaces to be inclusive of different age groups and uses. That being said, it is hard not to be charmed, and to a degree impressed, by the bicycle park in Berlin’s Gorlitzer Park. Located in the Kreuzberg neighborhood of the city, it is one of a networked medley of play and learning options for the community that I visited on a research fellowship two summers ago. 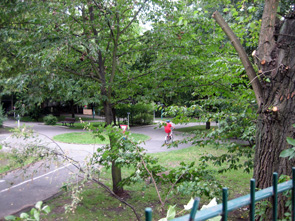 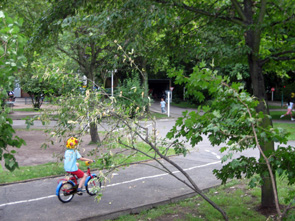 Unsure how to ride a roundabout and need a little practice before you head out on the busy streets? Check. How about boning up on your sidewalk bike path to street bike path transitions? (Yes, they are different.) Check. Did you say that you need to log a few more hours learning how to ride on cobble stones? Double check.

With working stoplights as well as programmed "free ride" or "race track" time, the park functions both as a place to safely ride your bike and an important civic teaching tool. Indeed, the designers of the playground have attempted to replicate every possible bicycle pathway, street and pavement condition found in Berlin.

Many of my misgivings about the playground waned when I got to experience the complexity of some of Berlin’s bike paths firsthand. Even for an accomplished competitive cyclist, Berlin’s bike paths are not a simple affair, frequently transitioning from road paths to sidewalk paths to singular spaces for bicycles. Even with practice, the bike path network is interesting in that its complexity requires consistent vigilance on the part of its users, quite possibly making it safer as a result. At the very least, the playground helps budding or more hesitant cyclists develop some of the skills necessary to safely navigate the city.

And why not have a curry wurst, play a game of volleyball, or learn how to properly lock your bicycle in between laps?

Unlike most American playgrounds, the Gorlitzer bicycle park also has amenities and activities that make it a more complete public space, encouraging people of all ages to linger.

It should be noted that I ran into some really stiff resistance from the playground managers when photographing the space and thus the pictures you see here do not fully convey the complexity of the available experiences or the large number of children using the park. Most of the images are my best attempt at "spy shots" and mostly had to occur after the space emptied out. Apparently, I am not a very good spy.

Other guest posts by Alex Gilliam: