It’s sad to see a park in disrepair. Actually, sometimes it can be downright spooky. (See our Spooky Playgrounds post from last Halloween.)

An ill-maintained park becomes vulnerable to vandalism and crime. A playground covered in graffiti invites more graffiti; a field scattered with trash invites more trash. A single park closure can launch a vicious cycle that changes the entire character of a neighborhood. It can also lower property values and deter tourists.

In Detroit, Michigan, overgrown and abandoned parks are an all-too-common sight to behold. But rather than sit around and grumble, members of the Mower Gang are taking matters into their own hands. Self-described “renegade landscapers,” they are spirited citizen activists who have realized that they have the tools they need—namely, mowers, trimmers, lawn tractors, and muscles—to help transform Detroit’s decrepit parks. Here’s what they say on their website, MowerGang.com:

“The Mower Gang mows public land in Detroit. These are abandoned parks that the city can no longer afford to keep in good repair. Rather than see them abandoned, the Mower Gang swoops in and keeps the weeds from taking over, preserving places for kids to play. We have been called renegade landscapers, reverse vandals, and vigilante against vandalism. Whatever you call what we do, we have fun doing it. Mower Gang events are one-part biker rally and one-part cleanup.”

Their work doesn’t stop at mowing, either. Realizing that many playgrounds in Detroit had swing sets, but no swings, the Mower Gang began a project on Kickstarter to replace 40 of the city’s 200+ missing swings. They aimed to raise a modest $800 and ended up with $3,020.

And yesterday, on May 15, the Mower Gang convened to create the “largest community watermelon park” in the city. Why? Because watermelon is “delicious, nutritious, and easy to grow.” Do you need a better reason than that?

Here are some past Mower Gang events: 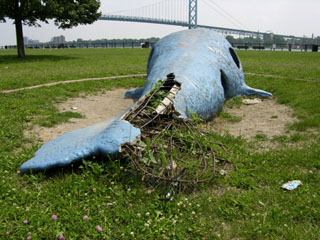 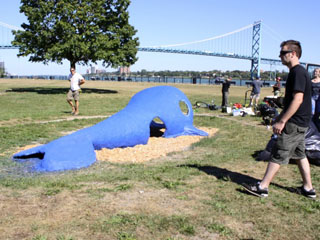 At Riverside Park, the Mower Gang not only trimmed the lawn but took advantage of gang member's expertise in cement work to help repair this play structure. After a paint job, the whale looked as good as new. Photos courtesy of MowerGang.com.

The gang got creative with their mowing here. Why mow an entire field when you can mow a human maze? Photos courtesy of MowerGang.com. 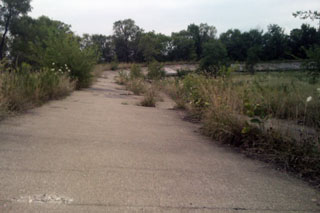 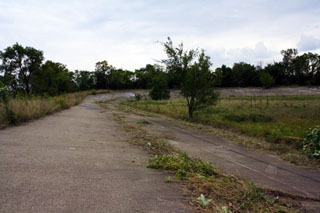 These before and after pictures of an abandoned racetrack show the effects of a little TLC. Photos courtesy of MowerGang.com.

It’s amazing what you can accomplish with a playful spirit, a can-do attitude, and a lawn mower.