Once upon a time, an elementary school in Davidson, N.C. had a lovely tradition. On Friday afternoons, fifth graders with parental permission left the confines of their classroom to play on the Village Green. And the best part? They did it all by themselves!

But the school has decided to ban on the longtime tradition—even with an OK from mom and dad, students can no longer walk to the Green from school. Instead, they must ride home on the school bus or get picked up by their parents.

Why? The school’s interim principal told Davidson News that “students are too young to be out without an adult.” The ban was prompted by complaints about safety and unruly behavior.

Davidson residents used to see around a hundred students congregating on the Green and strolling down Main Street on any given Friday afternoon. But after the ban was enacted, the town center was “eerily quiet, with only a handful of students visible,” according to Davidson News. “One group of four fifth-grade girls said their parents had picked them up at school and dropped them off downtown. But playmates were few.”

We live in an era where children are playing outdoors less than any previous generation. The average child spends over seven hours a day in front of a screen and one in three is overweight or obese. Unfounded safety fears and litigious threats routinely prevent our children from challenging themselves and developing independence.

Amidst all this madness, the Fridays on the Green tradition provided Davidson fifth graders with a crucial opportunity to learn self-sufficiency, get exercise, and reap the educational benefits of unstructured outdoor play.

Join us to overturn this needless ban. Tell Principal Dana Jarrett to preserve Fridays on the Green and help save play for Davidson kids! 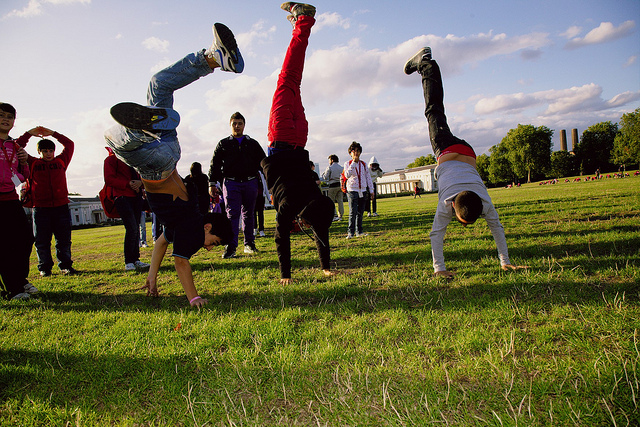 This is exactly what kids should be doing on a Friday afternoon. Photo by Visit Greenwich (cc).