Building a great place to play in Washington, DC 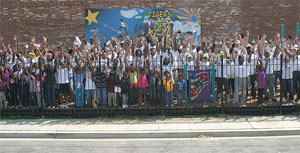 On May 6th, 2011 KaBOOM!, Friendship Southeast Elementary Academy and Dr Pepper Snapple Group built a great new place to play in Washington, DC. As a result of the build, the school is going to start a Keep it Green program for recycling at the school.

Since Build Day the community has never been more revived. Everyone knew, no matter where they came from, who they are, or what they do, that they did it together as one. The kids are starting to smile a lot more and can’t wait to use the playground all the time.

Play it forward with a donation today, because it starts with a playground, but that’s just the beginning.

Let's hear it from the parents

As you may know, next week we'll be celebrating our 15th birthday by building our 2000th playground at Imagine Southeast Public Charter School! We're honored that our 2,000th build has also been designated The Congressional Day of Service Event for 2011!

But we haven't heard yet from the parents of Imagine Southeast, who are just as excited about the playground as their children!

Vickie Moore says, "My son is so looking forward to the playground at ISE. He tells me that for so long when they had outdoor recess they had absolutely nothing to play with. All they did was run and play tag....now he knows he will have a variety of playground equipment to play with."

Adds Fran Jackson, "My daughter loves to climb and swing. So I know she will be entertained with the beautiful playground. Having a playground at school will help relieve some of her energy before we go home. I keep reminding myself that all the work is for a good cause and the end result will make the children happy."

Mr. Mills think the playground is "a great idea! [It] will help the children learn how to interact with one another and develop important communication skills as well.”

Learn more about our 2000th build and join us in celebrating 15 years and 2,000 playgrounds by signing our online birthday card! Be sure to like us on Facebook and follow us on Twitter to see the playground build in action on June 15!

Making a difference starts with a playground

At KaBOOM!, we believe in the importance of play, and we also believe in the power of civic engagement. That’s why we build playgrounds. We actively involve local communities in the planning and building process, inspiring them to engage with and care for their playspaces for years after the concrete sets.

On “Make a Difference Day,” this Saturday, October 23, U.S. Secretary of Education Arne Duncan and Corporation for National and Community Service CEO Patrick Corvington will join KaBOOM!, the Knight Foundation, and other White House cabinet members to build a playground, along with the parents, staff and students of Hyde Leadership Public Charter School. This will be the 1,894th build KaBOOM! has led over the past 14 years, and is one of 13 to be built by KaBOOM! and Knight Foundation this year.

Planning for the playground began at Design Day, held in August at Hyde-DC, during which students, parents and local community leaders met with organizers from KaBOOM! to design their dream playground. The students’ drawings were then used to create the final playground design.

As much as kids love swings and slides, we are excited to complement the community-built play structure with an Imagination Playground™ in a Box. Complete with custom-designed blue foam blocks and elements that encourage sand and water play, Imagination Playground™ in a Box allows children to constantly reconfigure their environment and design their own course of play.

We’ll be building the playground this Saturday in just six hours, but we know it will serve as a catalyst for community engagement, physical health, and creative growth for years to come. That’s why we say, “It starts with a playground.”