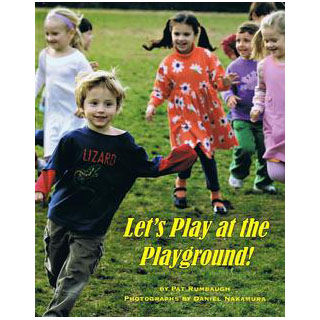 If every community had a "Play Lady" like Pat Rumbaugh, a lot more kids would be getting the daily active play they need. But at the very least, every community can now get a copy of her upcoming book. Let's Play at the Playground is an early reader that will inspire kids and adults alike to go out and play.

As Dr. Stuart L. Brown, Founder and President of The National Institute for Play, puts it, "This joyously pictorial panorama of playground play lifts one's spirit. Its compelling pictures capture the joy of spontaneous play, and evokes the momentum for a lifetime of healthy play, sharing and cooperation."

Let's Play at the Playground is photographed by Daniel Nakamura, a Maryland dad, play advocate, and owner of Booth-o-Rama Photobooths. Pat and Daniel are joining forces to extend the impact of their book by co-founding Let's Play America, an organization that aims to encourage and facilitate efforts like Takoma Plays in cities and towns across the country.

Ready to play? Reserve your autographed copy of Let's Play at the Playground today!

"I didn’t know a single person when I moved to Takoma Park, Maryland just over two years ago. But, luckily one of my neighbors turned out to be Pat Rumbaugh, a true force of nature and play advocate for our entire community. She talked me into joining her Takoma Plays! group and I haven’t looked back since.

This past summer I was excited to lead a new project – traveling playgrounds – based on something we used to do in Massachusetts. For 5 weeks, twice a week, we held a playgroup in a different Takoma Park playground. We had music, arts and crafts activities, hula hoops, balls, bubbles, you name it. We provided a fun, free service to our community, and by taking surveys of each playground, got invaluable feedback from residents. We took that feedback and added it to the KaBOOM! Map of Play and now citizens of Takoma Park can find out where the best playgrounds are, and even more importantly, KaBOOM! can see where there aren’t any playgrounds.

When I'm tired, and have a load of laundry to do, and dinner to make, and have zero energy, I know that taking the kids to the park for an hour will rejuvenate me. I believe that communities in which people know each other, interact with each other, and play with each other are safer, healthier, and happier. That’s what keeps me going!"

Mary found that play not only helps kids build relationships, but that it’s just as important for adults.

Play it forward with a donation today, and in honor of Mary, get out and play with your kids today!