From Los Angeles to Detroit, folks across the country are rallying for more play. Here's a look back at five inspiring and noteworthy news stories from 2012:

We can’t let the Play Deficit hurt our children

I’ve been a teacher for 21 years. And through my work, I’ve seen the Play Deficit first hand.

Since I began teaching, the number of hours kids spend outside playing has plummeted. Kids are spending more and more time behind TV and computer screens. And equipment like swings are being pulled from school playgrounds because they are considered "too dangerous."

We can’t let the Play Deficit hurt our children. We must let them play.

Play is crucial to healthy social, emotional, and cognitive development. Every day, I see kids learning important lessons on the playground. And I’m sure you can understand how grateful I am when they return to class calm and focused after running around with their friends.

Please join me and other educators and help KaBOOM! fight the Play Deficit.  Be a part of their Spring Donor Drive and your gift will be matched dollar for dollar by the A. L. Mailman Foundation.

Right now, their goal is 365 donors to help KaBOOM! support a 50-state attack on the Play Deficit by helping:

Investing in children is investing in all our futures. Please help and let them play everyday.

I had the drive, KaBOOM! had the tools 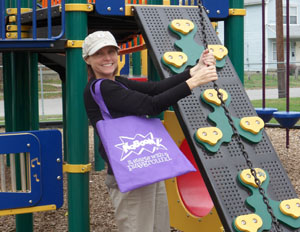 "I have never been comfortable taking a back seat, especially when my kids (Seth, Jonah and Finn) are involved. I began volunteering at Seth’s school when he was kindergarten and I haven’t stopped. From being a room mom to the PTA and even a member of the Louisville Mayor’s Health Hometown Movement schools committee – I’ll stop at nothing to make sure my kids, and the rest of the kids in our community, have access to the very best education possible. Every child, regardless of background can accomplish and achieve their goals if they know that a community is supporting them and cheering them on. I’m just lucky enough to be one of the cheerleaders.

In 2009 that meant a bringing a new playground to our elementary school. I had the drive, and KaBOOM! had the tools. Together with my partner-in-play, Kassi Clifford, and our school PTA, and with the KaBOOM! do-it-yourself project planner as our guide, we built a great new playground – in just one amazing day!

I so strongly believe that play and recess should not be extras or options, but should be a given part of a daily routine. If we are going to have a future filled with responsible adults we need to help create a world where all children understand collaboration, creativity, and cooperation. And I know KaBOOM! feels the same way."

KaBOOM! supports the work of PLAY advocates like Myrdin every day. From online project planners to trainings and community outreach, together we can work to make play a reality for every child in America.

Play it forward this holiday season with a gift to keep helping PLAY advocates like Myrdin across the country.

"I am fighting to save recess at our elementary schools and was referred to KaBOOM! as our fight got started. I have found valuable research and a supportive community at KaBOOM!.

Our fight has progressed slowly but we haven’t given up, and when I feel the stress that comes from being outspoken in our community I find much renewed strength by visiting the online community at KaBOOM!."

Play it forward to keep motivating play advocates like Sarah across the country.