Building a great place to play in St. Louis 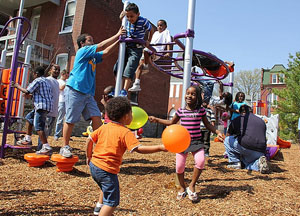 On April 6th, 2011 KaBOOM!, the Salvation Army Temple Corps Community Center and Energizer built a great new place to play in St. Louis. While at a community carnival a week after Build Day, a group of concerned parents approached Steve and John (who had helped lead the build) about vandalism and other inappropriate activities happening on the playground after hours. They decided they right then and there that they will be forming a neighborhood watch group to take care of the playground!

Play it forward with a donation today to support our model of community-built playgrounds which give communities ownership and pride in their great new places to play.