"The old adage 'the apple doesn’t fall far from the tree' had, for the most part, held a negative connotation for me until the KaBOOM! playground build in Pascagoula in 2008. We didn’t have as many volunteers as the other playground builds I worked on, but there was something different about this project - the kids were pitching in just throwing themselves into any job they could find.

Three years before this community was left in total devastation, and now houses that were once uninhabitable were homes again. Many of the people I know, where I used to live in Pascagoula, were too busy mucking out their houses in the days that followed Katrina to worry about when help would arrive. Like community after community along the Gulf Coast they just did what had to be done. Eventually they parked their FEMA trailers next to what was left of their homes, dug in and got busy with rebuilding.

What I witnessed in those children the day of the playground build struck me because it mirrored the actions of their parents and community after the storm. At first I just thought the kids would just get in the way, but they were relentless in their determination to help and did not take long to find what they were good at and run with it. It was apparent that it was not just fun to them - this was really hard work but they were determined to complete the project on time.  And like their parents and community after Katrina, they didn’t just sit there and wait for the cavalry to show up and do it for them."

For most towns a new playground is just that – a great new place to play.  But for the people in the Gulf Coast it offered a chance to rebuild their communities.

Play it forward so we can keep helping communities recover.

"Hurricane Katrina was the most devastating storm to ever hit the United States. The small towns of Waveland and Bay St Louis, Mississippi looked like we had been bombed – it looked like a war zone. My godchild, Ginny Vegas Reynolds, now living in Connecticut, remembered growing up in Bay St. Louis and after Hurricane Camille she and her friends had no place to play. Ginny contacted childhood friends Cheryl Carlson Goodnow in Massachusetts and Joellyn Frisbie Gilmore, my daughter in Diamondhead, a community just north of Bay St. Louis, to coordinate a way to get a playground.

In a matter of days Ginny was back in touch. She had made a connection with Darell Hammond, CEO of KaBOOM! The next thing we knew Darell was here to evaluate the situation. Within days a site was selected, KaBOOM! was getting corporate sponsors. Local children became involved with their playground wish lists and a design was developed.

The Morkin’s home, which prior to the hurricane had been a bed and breakfast was across the street from the playground site. They immediately opened their home to the staff of KaBOOM! as did the Gilmore’s. They were able to sign up more than 600 volunteers to help build the playground. By mid-December the big trucks rolled in with all the equipment, the design staked off and the build began.

It started with breakfast at 7:30 am, then the build was nonstop except for staggered volunteer lunch breaks. It was cold but no one complained. At 3pm the playground was complete. We all stood in wonder!! It was unbelievable! Oh! What a day!

Now, 6 years later, it is still beautiful. I pass the playground almost every day. There are always children at play or an adult just sitting on a bench reading a book or just relaxing under an old oak tree. KaBOOM! has been such a blessing to so many children with the additional playgrounds that followed. We love KaBOOM!."

After Hurricane Katrina KaBOOM! built more than 100 playgrounds on the Gulf Coast. Our work there continues with 3 builds in New Orleans in just the past 3 months.

Play it forward with a donation today because in the midst of a disaster kids need play more than ever.

It started with a playground 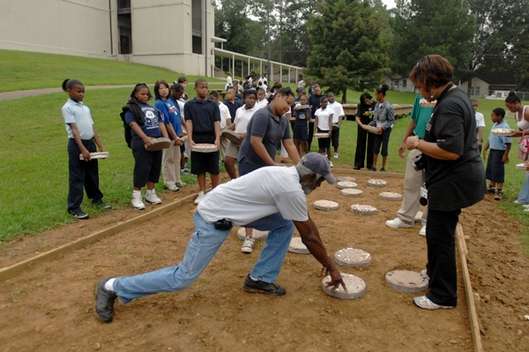 “I’m the Principal at Pecan Park Elementary School in Jackson, Mississippi. Mississippi has the highest obesity rate in the country, and every day I look at my students and know that if nothing is done they will literally grow into those statistics. I looked around at my urban, inner city school, with its transient population. Most people saw it as a less than ideal place for a wellness revolution. I disagreed.

For me, it really did start with a playground. In May of 2006 we built our fantastic new KaBOOM! playground, but that was just the beginning. The playground spawned a walking trail around it for students and adults, which inspired 7 cardio stations that popped up along the trail, which leveraged a grant for fresh fruit & vegetable snacks for every kid during the school year.

This year we’ll add a winter and spring garden to the school, and thanks to local community support, our parents have free access to a local gym and trainers come to the school 3 times a week to work with teachers and other school employees. I’m happy to say that since 2006 I’ve literally seen a physical change in my community, and I’m not going to stop now.”

Play it forward and help us keep inspiring leaders like Wanda across the country.