The fourth time's the charm 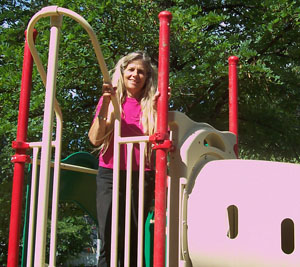 "My first playground project presented many challenges. The arsenic-laced soil where they playground was supposed to be caused a $60,000 problem and a year’s delay. The second playground I built was another challenge – the playground equipment had been purchased years before, and had, by then, fallen out of code with the American Disability Act.

But, we saw this as a blessing in disguise – while we had to fundraise to purchase additional playground equipment – the new equipment meant the playground would be accessible to ALL children. The third playground project I led was on the rooftop of an 18-floor building with a broken freight elevator. That, paired with epic heat and torrential downpours made for possibly the worst volunteer day I’d ever had.

You have to wonder why anyone, after all that, would build a fourth playground, which is what I did this summer. I work in early childhood development in Worcester, MA. Years ago we did a study as to why so many kids had developmental delays and one obvious need bubbled to the top – we needed more and better playgrounds. I knew what I had to do, and I went to KaBOOM! for help.

After attending several days of training, and working alongside KaBOOM! to build a great new place to play, I returned home and got to work. Four amazing playgrounds later, I know it was worth all the blood, sweat and tears that went into them. I can see it in the faces of the kids playing there every day."

Dianne built once with us, and four times (so far) without us, and now there are five more great places to play in the country thanks to her.

Play it forward so we can keep inspiring and teaching people like Dianne to build great places to play in communities that need them. 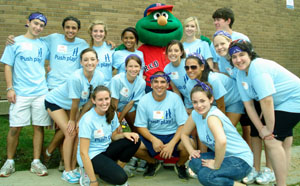 “It was my first week in Boston - orientation week for new students at Boston University. As part of our schedules for the week I signed up for a child-focused service project and couldn’t help but gulp when I saw our assignment – build a new playground – in one day.

Needless to say, I was incredulous. I had NO idea how to build a playground, I wasn’t strong enough to lift anything very heavy, it was going to be an incredibly hot day, and how could we possibly build an entire playground in just one day?

But, thanks to KaBOOM!, it was exactly the opposite of what I had been afraid of. I was amazed at the diversity of people, so many of them as doubtful as I was, who came together to work as a unified force.

We came together as one, not because we knew anything about playgrounds, mulch, or mixing concrete, but because we all had the same goal – to build a great new place to play. We struggled together, worked as a team, and in just 6 hours time we watched as the kids ran out to see their new, shiny, beautiful playground. What an amazing day!”

KaBOOM! helps volunteers like Genevieve discover the power of community.

Play it forward to help more volunteers discover the power of teamwork.