When the flood hit Louisiana this August, it hit hard. At least 13 people died and tens of thousands of homes were affected, causing billions of dollars in property damage. In some parishes, 90% of the structures were affected.

"The flooding came at a tremendous speed. You might have been walking in an area, and 15 minutes later it was underwater. Many people lost their homes, their cars; it was a disaster. I would compare it to Katrina, but without the winds," said Diane Drake of BREC, the subdivision of the state of Louisiana that oversees parks and public spaces in East Baton Rouge. 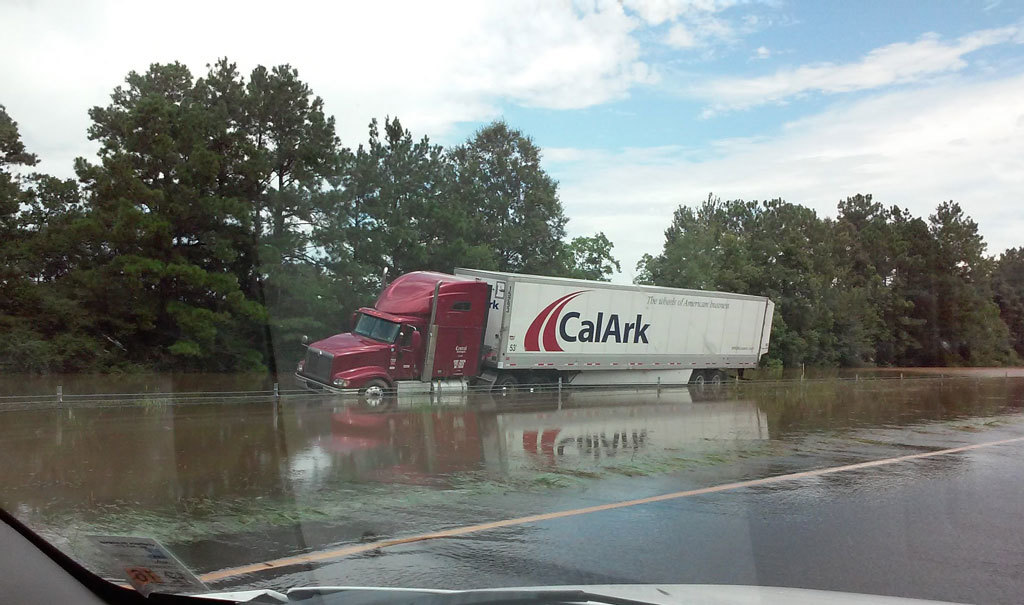 An abandoned truck sits on Interstate 12 in Louisiana

BREC has been working tirelessly for weeks to assist with disaster relief. They've set up shelters and have provided access to conventional basic needs, like food and water.

Extensive research confirms the importance of play to helps kids deal with toxic stress. It's in disaster situations that this kind of outlet becomes especially urgent.

At the shelters and emergency camps, BREC was able to give kids a little bit of a daily routine and get them out of this situation of uncertainty into a time where they can just play. They don't have to worry, they don't have to think about what's next. They can just be free and play and move and use their imagination.

Kids confined to these shelters were delighted by BREC on the Geaux, a mobile recreation program designed to get the youngsters active and having fun. It's a truck that opens up to offer all types of playful materials: hula hoops, trampolines, sports equipment, and even an obstacle course. The "fun-mobile" had previously been used at parks and recreation centers. Now, it was serving a similar function in more pressing circumstances. 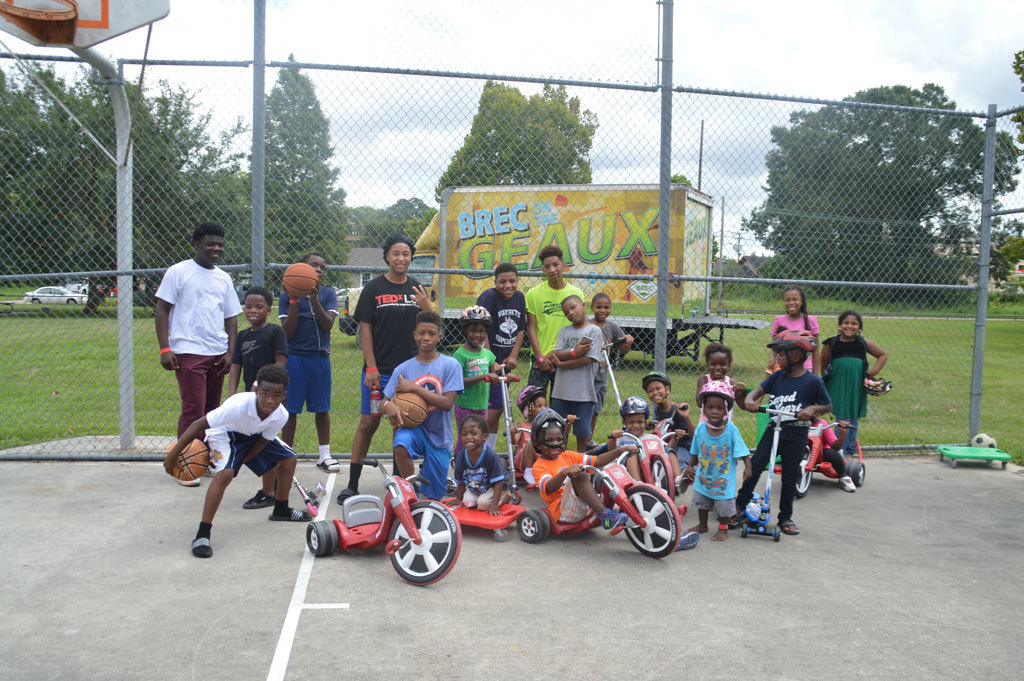 This playtime also benefitted the parents, many of whom were still trying to process the enormous impact of the flood. "It gave the adults a break, where maybe they needed to be making phone calls or they might just need some private time where they could quietly grieve what had happened without doing that in front of the children," said Cheryl.

Perhaps the most unique and exciting aspect of the play relief came in the form of a Rigamajig. Though it sounds like it came out of a Dr. Seuss book, Rigamajig is actually a collection of wooden planks, pulleys, and ropes designed for hands-on play and learning. BREC received the Rigamajig through a Let's Play Grant in 2014. 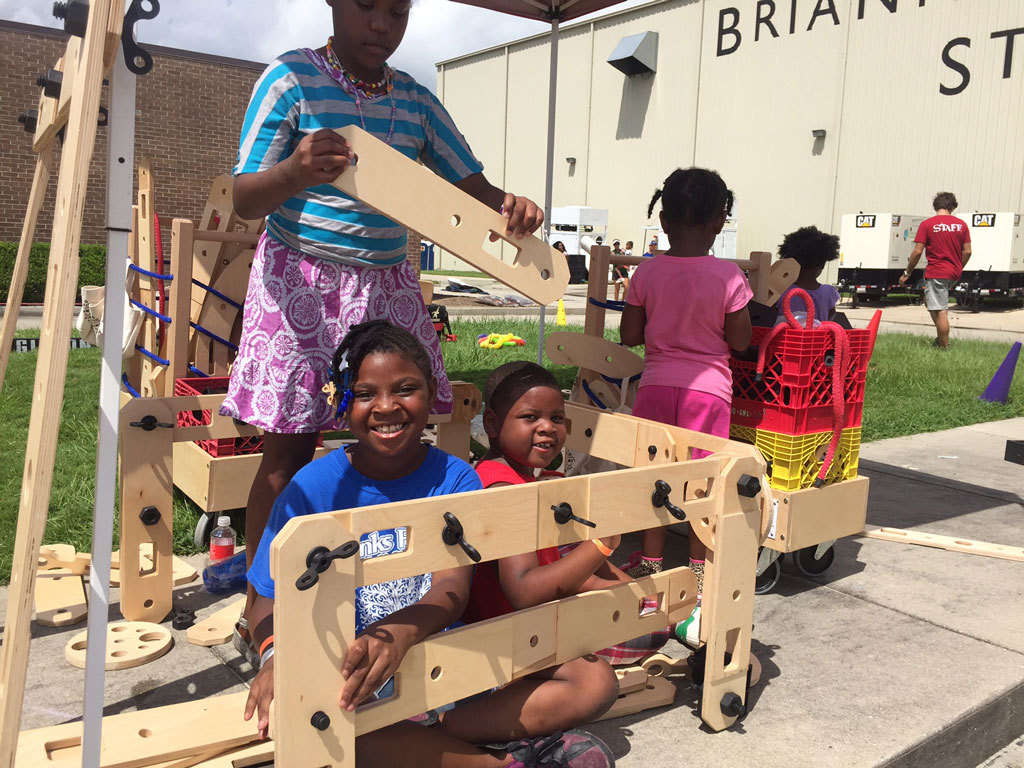 The Rigamajig was invaluable at the shelters, in part because it encouraged a sense of community between the kids. Although they didn't know each other coming into the shelter, they quickly found themselves sharing parts and working together to build all sorts of creative contraptions.

"It created new friendships among kids who didn't know each other," recalls Diane. "It helped them to have something shared."

Even when it was time to pack up, Diane was moved by the cooperation the kids demonstrated, volunteering to stack Rigamajig parts. "Although many of them didn't want to stop playing, these simple chores gave them a chance to be part of something normal."

Though it's been several weeks since the flooding, Louisiana is still very much in recovery mode. Many kids are unable to go to school, and don't have access to safe places to play. We're continuing to work with community partners in the region to assess needs and offer support. 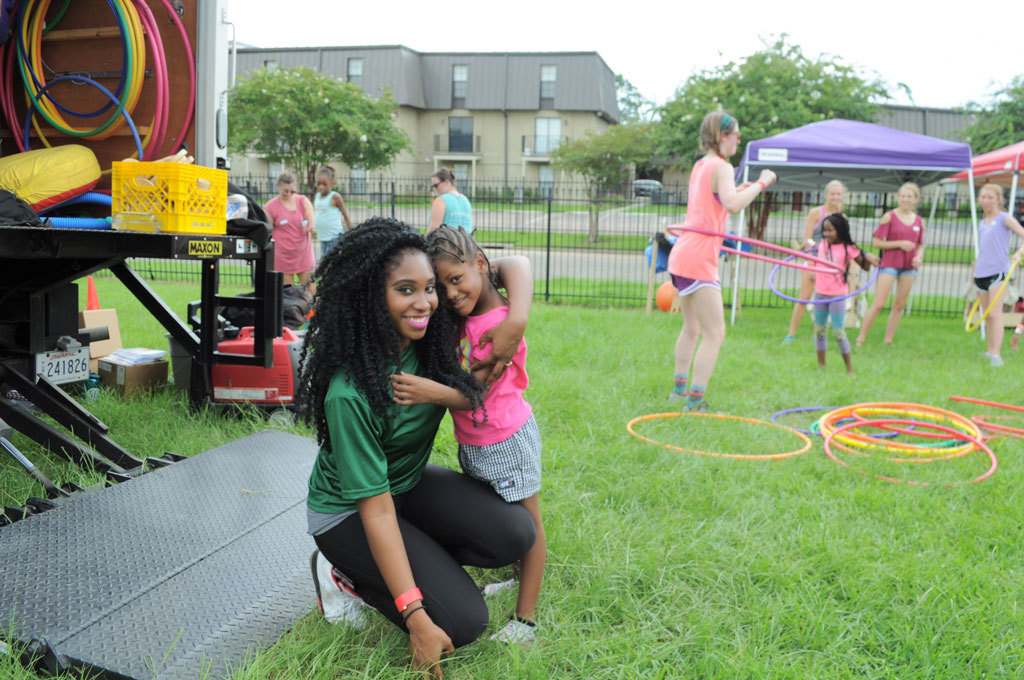 When things get rough, a little play can go a long way

Learn more about our work to bring play to communities that have been affected by natural disaster and crises.

Discover what Rigamajig can do for kids near you. 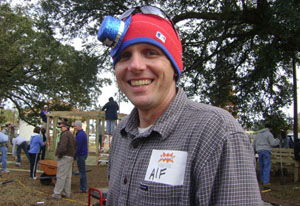 "When we moved into our neighborhood two and a half years ago, it was (and is) still very much in the midst of recovery from Hurricane Katrina. We were immediately struck by the lack of community space...somewhere for kids and neighbors to gather, play and build relationships. Our local 'playground' – which consisted of a broken metal slide and two swing-sets with no swings – had been identified by the city government as one that needed to be rebuilt, but there was no information about how or when that was going to happen.

That’s when KaBOOM! happened.  I sent off a quick email to a staff member there, Shira, and within 30 minutes we were on the phone talking about our new playground. That was late September; our playground was built on December 18th. Our playground, and Build Day, accomplished everything we thought it might – kids and adults are both meeting their neighbors and building relationships – it’s truly incredible.

When we were chosen to receive a new Imagination Playground, a set of large blue foam blocks like life-size tinker toys, I knew we were truly blessed. We take these blocks out into the community as often as we can – to schools who are still without playgrounds, to community events and our monthly movie nights. Recently I discovered that by creating a loose perimeter for the blocks kids are playing even more WITH each other, instead of just grabbing a few blocks and playing by themselves. I am humbled and so thankful for everything we’ve received from KaBOOM!."

Alf spoke up for the community he knew he could have, and with our help, and a lot of work, his neighborhood is thriving.

Play it forward with a donation today so we can keep building up neighborhoods like Alf’s.

"Our park was dead, high grass, two swings and basically it was going to be closed. Then, Mike Winnegate started a team with 12 players and KaBOOM! came in and built a playground. This was something the park had never had. Chris Paul and the Hornets saw a community working with KaBOOM!, Marriott, City of New Orleans, Friends of NORD, and NORD and provided helpers and repaired our basketball court.

Now, on any given day children from all over the community are playing at the park. The seniors are using the benches and tables provided by KaBOOM! to sit, read, play table games and families are having picnics. The entire community is once again enjoying the outdoors. The sweet sounds of children laughing and playing, laughter from the adults and stories being told by the elders fills the air of our park and our community. Watching them takes turns on the slides and on the basketball court is amazing because they are playing together without an adult instructing them on how to play fair.

After a hard day on the job, I will stop at the park just to sit a watch. The joy my sprit feels just watching the kids’ having a great time brings tears to my eyes and a smile to my heart of hearts. I never in my life would have guessed that something so simple in this world of technology could bring so much joy to so many.

Words could never express how much KaBOOM! has given to inspire a community."

Play it forward with a donation today so we can keep building up community’s like Madaline’s.

Thanks to KaBOOM!, a nonprofit organization that helps communities build playgrounds, children living Uptown, downtown, in eastern New Orleans and along the lakefront are enjoying refurbished play spots in areas that were devastated after Hurricane Katrina.

Shortly after Katrina and Rita ravaged the Gulf Coast, KaBOOM! launched Operation Playground with a mission of building 100 playgrounds in the region.

Today, Operation REACH and The Chrysler Foundation are joining with KaBOOM! to build a newly designed playground at The Knowledge Garden Child Development Center at 2115 Carondelet St., which serves hundreds of children.