From our ceo - KaBOOM! News

From our CEO: Leading the way through play

As a Schwab Social Entrepreneur of the Year in 2011, KaBOOM! Founder and CEO Darell Hammond has the opportunity to participate in the World Economic Forum next week in Davos, Switzerland. It's a chance to meet business and thought leaders, but also to advocate for something that sparks true entrepreneurial thinking: unstructured play.

Hammond explains this further in a new piece for the Huffington Post:

Unstructured play gives kids the space they need to tinker and take risks -- both vital for the budding entrepreneur. Yet, too frequently these opportunities are being taken away from our kids in favor of more structured activities or time in front of a computer screen. The lack of free, child-directed play time for our kids today will have dire consequences for these future leaders, making them less prepared to solve complex challenges and problems. That is one reason why KaBOOM! has embraced the concept of the Imagination Playground™ which uses loose parts and encourages kids to use their imaginations and be creative.

Dispatch from Davos: The promise of collective impact

Twenty-five hundred citizens from around the world have descended on the snowy ski resort of Davos, Switzerland for the World Economic Forum's annual meeting. This year's theme is The Great Transformation: Shaping New Models. I like that it is about ‘shaping' new models and not necessarily ‘creating' them.

The diversity of people and confluence of ideologies is prevalent and core to the lively and smart discussions. Nowhere is the diversity more evident than in the outlook of the world's future. From my conversations thus far I have been struck by the conflict between those who are incredibly optimistic and carry a high level of confidence that new and better solutions are being developed through impactful innovators vs. those who are much more pessimistic about the future and the increasing number and power of the prolonged world crises we are experiencing.

Those bordering on pessimism believe that the new reality is here to stay. I am much more aligned to the optimists. And frankly, I have been struck by the optimism that is a common outlook of most of the social entrepreneurs. It seems rationale that a social entrepreneur exists because he/she is focused on creating solutions to our world's problems. We believe that our society's biggest challenges are solvable, and that, as Nobel Peace Prize Laureate Muhammad Yunus said, "the distance between the impossible and possible is shrinking."

One idea that I am certain is a game changer for all of us is the idea of collective impact. No one business, no one government, no single sector can do it alone. Multiple stakeholders need to have shared values because they truly have shared responsibilities. By taking collective action we can have collective impact, and that will be our fastest and most powerful path to the necessary solutions.

It was an incredibly exciting first day of Davos. While today is the first official day of the WEF, yesterday was a pre-forum day spent with Schwab Foundation Social Entrepreneurs. Between the programming of the brilliant and thoughtful Schwab Foundation's team and the talent of the Social Entrepreneurs in the room, it would have been worth the journey to Davos even if it were my only day here.

How can one not be optimistic about the new models we can shape and the resulting transformations we can have just based on the idealism, experience and perseverance in that room? I look forward to the continuing debate over the next couple of days. I was on a panel this morning for a session called The Creative Workplace. I will share more about that in an upcoming blog.

From our CEO: Accidents happen – and that’s okay

The article “Societal Values and Policies May Curtail Preschool Children’s Physical Activity in Child Care Centers,” and associated study published yesterday by the American Academy of Pediatrics, shows what we at KaBOOM! have seen happening increasingly over the years: the risk of lawsuits and increased academic competitiveness is harming our children.

In our aggressively litigious culture, we have become so obsessed with controlling risk that children are missing out on opportunities to grow and learn. There is a difference between an injury and an accident. An injury happens when equipment is in disrepair. An accident is just a natural part of growing up. Instead of accepting that a few bumps, bruises and even stitches are an inevitable part of childhood – and can actually be a healthy learning experience – we have somehow come to believe that accidents of any kind should be avoided at all costs.

Play is also under attack in our nation's schools. Shrinking recess and increased homework leave little time for play. And increasingly, cities are building new schools without playgrounds. Despite countless studies proving that play is integral to children's learning and health, most kids aren't getting enough space and time to play during the school day.

The intentions are good. We all want our kids to be safe and to have all of the opportunities available to them. Unfortunately, common sense is victim to these pressures. The key now is to take the results of this and other studies and pivot the conversation away from blame and toward a solution.

We need to create play spaces for our kids that encourage risk-taking and autonomy, allow them to be in control, and give them the time and space they need to exercise their bodies and master certain skills. That is one reason why KaBOOM! has embraced the concept of the Imagination Playground™ which uses loose parts and encourages creativity.

But even the most engaging play spaces won’t help our kids if we don’t shift our societal values to recognize the importance of play in our children’s physical, emotional and cognitive health and development. Once that happens we will automatically start to allocate appropriate financial resources for play spaces and give our kids the time they need to be kids.

When I was a growing up I had plenty of opportunities to play, (and yes, I had plenty of accidents, some of which required stitches) as did most of my peers. It took a generation for play to take a back seat and it will likely take a generation or more to correct itself. We must continue to study the issue, but more importantly, be willing to act when the facts can no longer be denied.

A year to remember, recommit and continue to act! 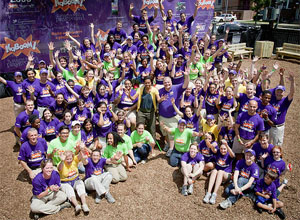 As we look back on the KaBOOM! 15th birthday year, it is hard not to feel pride in all that we – the broader KaBOOM! community – have accomplished toward realizing our vision of a great place to play within walking distance of every child in America.

Together we have built 2,072 playgrounds empowering communities across North America to come together for the greater good. We have taken all of our knowledge and made it available – for free – so people can self-organize and build playgrounds at a much faster pace than we can alone, while also building local skills, capacity and social capitol.

We have mapped 89,145 playgrounds in our effort to create a nationwide Map of Play, which will in turn illuminate Play Deserts, allowing us to use our resources even more strategically to serve those communities most in need. To that end, we created a mobile app, Playgrounds!, to make it easier for you to add to our Map of Play and find great places to play in your neighborhood.

We recognized 151 Playful City USA honorees across the country for their efforts to make their cities more playful. And, with your support, my book, KaBOOM!: How One Man Built a Movement to Save Play, was #4 on the NY Times Bestseller list, enrolling more communities, mayors, teachers and parents in the movement to save play.

With so much to celebrate, it’s easy to get lost in the excitement. But we must not forget that KaBOOM! was founded out of a tragedy – the lost lives of Iyesha and Clendon, who suffocated to death while playing in an abandoned car because they didn’t have a safe place to play. That story, as reported in the Washington Post, inspired me to bring people together and do something: build a playground.

This year, we turned another tragedy into hope in Phil Campbell, Ala., whose town was nearly destroyed by the largest tornado in Alabama history. Twenty-six people were killed including two students and a teacher from Phil Campbell Elementary School. Along with homes and businesses, their only playground was shredded by winds reaching over 210 MPH. Residents from Phil Campbell are still struggling to put their lives back together, but on December 17th they got a new playground, thanks to support from Disney, and two Imagination Playground™ in a Box™ sets, thanks to the generosity of donors from across the country.

Our mission to help communities build playgrounds is also driven by the fact that outdoor play is critical to the health and well-being of our children, yet today's kids have fewer opportunities and less time to play than any previous generation.

As we look ahead to the next 15 years, we must recommit to and act on behalf of Iesha and Clendon and all of the children in our lives to ensure that they have a great place to play and that play is prioritized at home and in school. Whether that means organizing a playground build in your neighborhood, joining our online community on Facebook or donating to our broader efforts, make a resolution to help advance the cause of play.

Oh, and don’t forget to have some fun along the way!