The First Lady, members of Congress, and hundreds of volunteers help us build our 2000th playground

As early as 5:30 this morning, purple-shirted volunteers could be seen congregating at Imagine Southeast Public Charter School in Washington, DC to build our 2000th playground and celebrate our 15th birthday. Imagine Southeast, a tuition-free public charter school, has had no playground equipment at all for its 480 students—but that was all about the change.

After a week of extreme heat, we were relieved to find the sun shining not quite-so-fiercely, as hours of mulch-shoveling, concrete-mixing, slide-hoisting, and other physically demanding tasks lay ahead of us. The day officially kicked off with some invigorating warm-up exercises around 8:30 a.m. Among those in attendance were 150 parents and staff from Imagine Southeast, over 85 Boomers (KaBOOM! staff), and AmeriCorps volunteers. We wasted no time getting to work: There were rock walls to assemble; gardens to plant; picnic tables to build; and murals to paint. 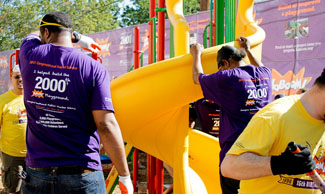 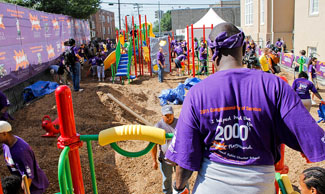 As afternoon approached, some semblance of a playground was starting to emerge and the mulch pile looked quite a bit less daunting. Still, we knew we could use some extra hands, and luckily, help was on the way. Joining us were some very special volunteers from the White House – members of Congress, who were participating in the 2011 Congressional Day of Service Event; the Honorable Arne Duncan (below left); and First Lady Michelle Obama! 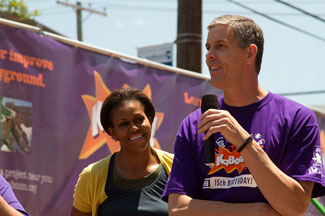 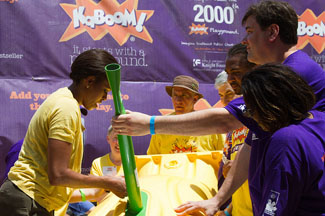 Said the First Lady, "You all make sure you help take care of this playground.  You make sure that kids get over here and play.  We want you all moving." Mrs. Obama is not a playground-building novice -- in June 2009, she joined California First Lady Maria Shriver at Bret Harte Elementary School in San Francisco to transform the school’s vacant play lot into an intergenerational playground and garden.

But this time, Mrs. Obama wanted to try her hand at something new. "I’m going to mix concrete!" she announced. "It’s been a lifelong dream of mine to mix concrete." We quickly put the First Lady, the Honorable Duncan, and our Congress members to work, and in just over an hour, the finished playground sparkled under the afternoon sun. 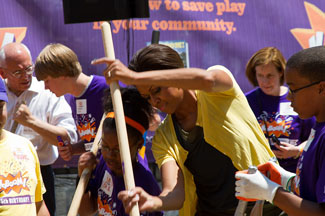 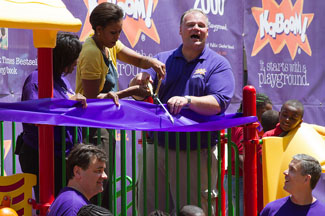 As Mrs. Obama prepared to cut the ribbon (above right, with our CEO and Founder Darell Hammond), we hummed “Happy Birthday” to KaBOOM! through hundreds of purple and orange kazoos to close out a thoroughly exhausting, thoroughly rewarding day.

Our 2,000th build was funded by the John S. and James L. Knight Foundation, with the participation of our National Partners Dr Pepper Snapple, Foresters, Kraft Foods Foundation, JetBlue, and MetLife Foundation. It represents the collective effort of not just the hundreds of volunteers who were present, but also the one million volunteers who over the past 15 years have contributed their time and sweat to give 5,501,334 children a great place to play.

All photos by Chris Sopher, courtesy of the Knight Foundation.