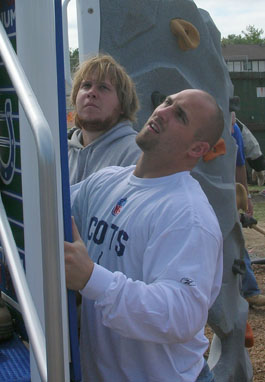 NBC's "Parks & Recreation" is a comedy starring Amy Poehler (from "Saturday Night Live") as Leslie Knope, a parks and recreation official who wants to build a new playground.

Of course, we've always known that if Leslie would just check out KaBOOM!, we could help her get that playground built. Turns out that producers at "Parks and Recreation" had the same idea, and decided to feature KaBOOM! on the show.

On this episode, which aired Oct. 22, 2009, Leslie and her team visited the nearby city of Eagleton and the KaBOOM! build taking place there. At first, Leslie is skeptical that a playground can actually be built in one day, but as she witnesses the transformation, she catches the KaBOOM! spirit and becomes even more determined to get her playground built. “Parks & Recreation” featured KaBOOM! in the episode as part of NBC’s participation in the Entertainment Industry Foundations (EIF) drive to feature volunteering across all networks called “iParticipate.”

Thanks to NBC and the producers of “Parks & Recreation” for inviting us to be a part of the fun.  We hope you enjoy the episode, and we hope that you take a moment to check out the many ways you can get involved.

UPDATE: Read what our CEO has to say about the episode in the Huffington Post.

KaBOOM! playground builds in the news!
Everybody loves Reverend Run, especially when he's building playgrounds! He and his wife Justine Simmons, along with KOOL-AID, helped build a great new place to play in Phoenix last week, and this blogger loved every minute of it! In the photo to the right, they're doing arts and crafts with the kids at the build.

Cruising over to the middle of the United States, our recent build with Mutual of Omaha got some nice press coverage in the Omaha World-Herald on Thursday and Friday. It was also featured on their local NBC affiliate, WOWT. It sounds like a really fun playground, too: "The new playground includes a large playscape, new tetherball poles, a sandbox and benches," says one of the World-Herald articles. "Sand and gravel pits have been replaced with grass and mulch, and volunteers installed benches for an outdoor classroom." We'll be posting photos soon, so you can see for yourself!

Meanwhile, way over in New Jersey..."Even with the rain, everybody came out excited, dedicated and ready to work," said Monique Reddick, social services coordinator for the Volunteers of America Delaware Valley's transitional housing complex, about the recent playground build in Camden.

Thanks for the shout-outs!
Thanks to  AARP and Seattle Stay at Home Moms Examiner  for some nice shout-outs about volunteering and Play Days, respectively!

Check out this great video of KaBOOM! staffer Lisa Attman-Palmer being interviewed by Anne Pleshette Murphy on ABC News!

Here's a collection of videos covering our playground build with CaliforniaVolunteers, First Lady Michelle Obama, and California First Lady Maria Shriver on June 22. (Some of which have ads at the beginning - apologies.)

Our build with First Lady Obama and Calif. First Lady Shriver is in the news!

Here are some stories about our build with CaliforniaVolunteers, First Lady Michelle Obama, and First Lady Maria Shriver June 22!

Today in Play: Rev Run builds with us in the Bronx, and more!

I don't get to feature 50 Cent's blog very often (or ever, really), but there's a first time for everything! Check out his feature on Rev Run helping to build a playground with us this week: Rev Run, Wife Justine pitch in to help build playground

More KaBOOM! in the news:
Play outside to help build a playground (Time Out New York Kids)

Next week's Conference on Volunteering and Service in San Francisco, Calif. will not only feature First Lady Michelle Obama and California’s first lady Maria Shiver during the opening session, but will also serve as the official kick-off to the United We Serve summer initiative, a program intended to renew the American spirit of volunteerism and service.

As part of the events surrounding the conference, KaBOOM! and California Volunteers will partner to build a great new place to play at the Bret Harte Elementary School in San Francisco, Calif. on Monday. KaBOOM! will also premiere its United We Serve program, "Pledge Allegiance to Play" next week. Pledge Allegiance to Play will provide volunteers, new and old, with ways they can engage with local issues and improve their communities. Visit kaboom.org then to see all the exciting things you can do to support your community!

The Conference on Volunteering and Service, co-sponsored by the Points of Light Institute and the Corporation for National and Community Service, will serve as the world's largest gathering of volunteer and service leaders from the nonprofit, government, and corporate sectors and aims to recharge, engage and bring back new ideas and civic energy to strengthen the reach and impact of the participating organizations.

Shreveport native is one of NBA's most giving
By Jason Pugh
Shreveport Times
July 23, 2008

Ditto for his community service resume, something that will grow with respect to Shreveport in the next month.

Jamison, a Shreveport native and two-time NBA All-Star, was in Bossier City on Tuesday to announce the building of a KaBOOM playground on St. Charles Street in the Barksdale Annex neighborhood.

"I was in the All-Star Game this past year and we did a lot for the community of New Orleans," Jamison said. "The most important thing for me is giving back to kids. KaBOOM does a lot for the community and kids. I recall as a kid, just having the opportunity to have that one place where I could go and be a kid — just enjoy myself and play. I still have those memories. There's a lot of kids in dire need of that opportunity." [More]