How a dog is changing lives on the playground

No dogs allowed? No kids allowed? When it comes to play spaces, dog owners and parents sometimes find themselves at odds. Not so at Jefferson Elementary School in Playful City USA community Missoula, Montana, where a new “barrier-free” playground includes a space for the city’s many dogs (and their owners) to play.

But Scout doesn’t just play at Jefferson; he has a job to do. A four year-old English Lab, Scout serves as an assistant to Nancy Jo Connell, a speech-language pathologist with the Missoula County Public Schools district. Nancy Jo enlists Scout’s help to work with students to overcome communicative difficulties, autism, and emotional or physical problems, in a process known as animal-assisted therapy. 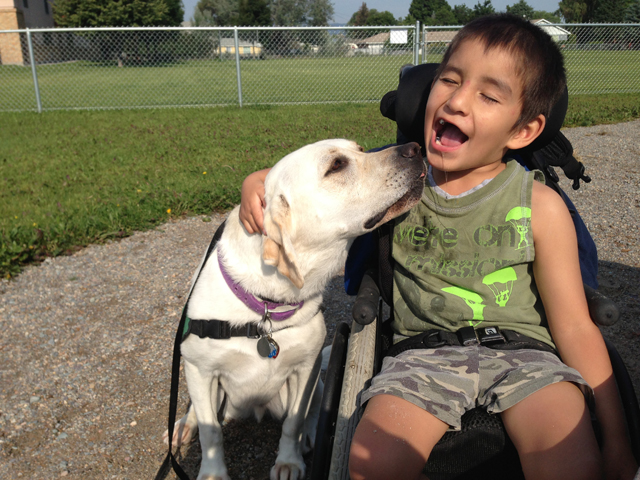 Before the new barrier-free playground was constructed, Nancy Jo and Scout had been working with students inside the classroom. Nancy Jo has since found that the new outdoor play space is expanding Scout’s therapeutic potential.

Being out on the playground, she says, allows the kids to release steam and reduce stress. It also adds a social dimension to the therapy sessions, since the children participating in therapy can invite their peers on the playground to come play with Scout.

A favorite outdoor activity is grooming Scout, which helps to increase children’s coordination and fine motor skills. For some, especially those on the autism spectrum, the pet grooming process can be calming. Other favorite play activities with Scout, including hide-and-seek and fetch, increase physical activity and motivate students to learn language commands like “fast, slow, and stop.”

In fact, one boy with autism uttered his very first words at school while playing fetch with Scout. The boy tossed the ball multiple times, watching Scout retrieve it, but after one toss, Nancy Jo gave Scout the signal to stay. Expecting the dog to get the ball, the boy finally shouted, “Go!” When he went home that night, he pointed to a copy of Clifford the Big Red Dog, and turning to his mother, said, “Puppy.”

As Scout demonstrates, dogs and kids can not only play “nice,” but dogs with the right training and disposition can actually help children with special needs reduce stress, bridge social divides, and improve their fine motor and language skills. Something as simple as a game of fetch can lead to developmental breakthroughs.

Could dogs like Scout become a fixture at other school and public playgrounds? After all, innovation doesn’t have to mean elaborate new-fangled play structures. It can simply mean opening the playground gates to something we already have.