When Portland, Ore. residents Cody and April Goldberg set out to build an inclusive playground for their daughter Harper, they had no idea what they were getting themselves into. Three years later, with the help of a Let’s Play Construction grant, their community cut the ribbon for Harper’s Playground—a playspace more unique and more beautiful than they ever imagined. The project had come to an end, but a movement was just beginning. Here, Cody shares his story:

Harper Rose Goldberg is the most amazing little girl you’ll ever meet. I’m biased as her dad, but it’s true. At birth she had a small cyst deep in her throat that was blocking more than 70 percent of her airway. She fought for hours to cling to her life while the doctors worked to get an air tube past the blockage.

They eventually diagnosed her with Emanuel syndrome, which explained some other complications and which had her in the hospital for two months. With less than 200 known cases in the world, the doctors knew very little about the syndrome. They told us, “You should expect her to never walk nor talk in her lifetime.” She took her first independent steps at age five. Still, her mobility remains limited and she often uses a walker to get around.

Harper, left, poses in front of her playground construction site with her family.

When Harper was four, my wife and I were at our neighborhood park and realized that her choices were pretty limited. We approached the Portland Parks & Recreation department and asked if they would consider building an inclusive playground. They said they didn’t have the budget, but if we could fundraise, they would help facilitate the project.

One of our main motivators was to help Harper get to know her neighbors. We were becoming increasingly frustrated with the status quo of the “disability world” – particularly after we experienced the exclusion of Harper from our neighborhood school. We were forced to enroll her in a school all the way across town. After that happened, it fueled our fire to get this playground built. When we approached our local neighborhood association (Arbor Lodge) and asked for an endorsement, they not only endorsed the project but also wanted to make it a priority for the neighborhood. That gave us a lot of faith that we were actually going to do it.

I know the parks department didn’t initially think we were going to follow through to get this playground built. But they realized we were serious, and they told us we could either hand the money over to them and they would manage the build, or we could manage the build ourselves for about a third of the cost. I remember thinking, “You’ll let me manage the build? I’m just a dad on a mission.”

The project took a major 180 degree turn in March 2011 when we visited with a design firm called MIG, Inc. They hosted a design charette along with Girvin Associates, Inc. and members of the Portland Parks Department. The research that MIG, Inc. presented about how design impacts a playground, how children interact with space, and how a properly designed space can encourage collaborative play and cognitive development—it completely blew my mind. Lots of people think that playgrounds are important because they help kids move their legs around and get their bodies moving, but it goes so much deeper.

The design that came out of that meeting was so inspirational, so beautiful, and so paradigm-shifting, I think it helped us attract more major donors. They say to catch bigger fish, use a bigger lure. People were inspired to be part of something that was not only about accessibility but also about better design. For example, many inclusive playgrounds use ramps that lead to a structure, but that limits the choices that kids on wheels get to make. Why not eliminate the structure and create a plaza instead? We began to understand how a more open-ended design and a more natural environment would encourage kids of all abilities to use their imaginations more.

The resulting drawing, which was done by my childhood pal, Todd Girvin, helped us not only secure donors, but also a pro-bono developer, Gerding Edlen; a contractor, Walsh Construction; and an all-important pro-bono landscape design firm to take the concept drawing into construction document phase, PLACE studio. The savings to the project represented by all of these generous firms equals approximately $300,000.

I like to call the fundraising and planning process a modern-day stone soup in action. I’ve always loved that story. We started with nothing, but we had to convince everyone that even if all they had was one carrot, that carrot would help. I had so much passion for the concept, I couldn’t stop talking about it. Everyone I spoke to about the why and the what, I had a new believer who was ready to help.

We were adopted by The Timbers Army, the local supporters group of our Major League Soccer team. They raised just shy of $85,000 for the project. We also received a $75,000 grant from a foundation that happened to be run by a couple we were seated next to at a wedding. There were donations that came in from neighborhood kids who had set-up lemonade stands on our behalf. It was truly a humbling experience. In the end, the total project value was $1.2 million dollars. 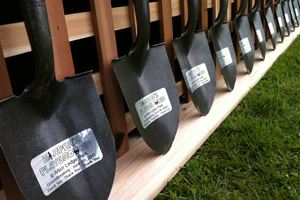 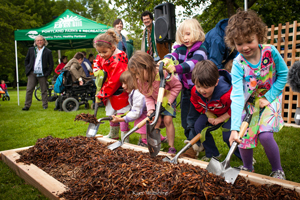 Now, three years later, we have this awesome “soup” in the middle of our community, and everyone threw some ingredients into it. I go at least three times a day—and of course, Harper is a celebrity there. It’s very difficult to find the words for how gratifying it is to see the playground in action. It was something I was dreaming about for three years. I would close my eyes and imagine it, and it’s actually how I imagined. Because of the new paradigm we established, there’s a broader range of age groups. Neighbors say that children at this new playground play more often and longer. And kids are seeing examples of inclusion that could expand into schools and in the workplace.

Families flock to the completed playground.

We hope this project will serve as a Trojan horse for the inclusion concept. We are working on a vision plan for expansion within Portland and beyond—the sky is the limit in terms of the models we could approach. Harper’s Playground is just the beginning.

Play for all kids

“When my son was born sixteen years ago, my life changed. As a new mom of a child with a disability I was quickly realizing how many challenges and hurdles we would both face in the years ahead. But my heart broke when I realized that there were no real playgrounds, or any type of place for my son to play with other children in an unstructured way. Play is a necessity for all children, and especially important for disabled kids. I knew I had to take action.

With the help of four other moms we started the Center for Creative Play, and indoor play space for unstructured play that was accessible for all children. Within 5 years we had over 45,000 visitors a year. We started working on accessible playground across the country and worked with KaBOOM! to make accessible playgrounds a reality.”

Mara saw a need and worked to fill it. Her passion for building accessible playgrounds is contagious and her work will continue until all kids have a great place to play.

Play it forward with a donation to help bring play to ALL kids, without exception.

In honor of both the National Day of Service and Inspiration Monday, I have a very special story to share with you.

One of the things I like best about KaBOOM! is that no two playgrounds we build are the same. Every one is custom-designed by the kids and families who will use it, tailored to the needs of that specific community.

And for one particular playground build with SUPERVALU in Bakersfield, Calif. on Oct. 29, the community had very specific needs that needed to be met. This playground was built to serve an after-school program for children with autism. And, well, I'll let Ramona Puget, who runs the program, explain what a difference it made:

This playground has been a blessing for this program. Our students did not have an outdoor activity other than riding bikes to play on and dirt to kick a ball on. For autistic children this is not really motivating for them, nor do they have the coordination to do these activities real well. They need to be very active in running, and manipulating objects. With the sensory component of the bells, xylophone, drums, climbing structure and movement of the bus, it helps them to control those areas they have strong points in.

The children who would not play are PLAYING with others on the structure, and not just parallel play. The joy and excitement we see in their overall personalities is priceless. They are happy, elated with a sense of pride that this is their playground and they look forward to coming to "Fun School"! The other day it was a little windy, and started to drizzle, and the children were upset because they did not want to come in because they were having so much fun. So through the wind and drizzle we continued to play and had a day of unexpected play weather. Nothing can stop them from enjoying this playground, not even the elements.

Learn more about playspace needs for children with autism.

Do you have experience working with kids with autism? What would your dream playground for them look like?