When Good Is Not Good Enough 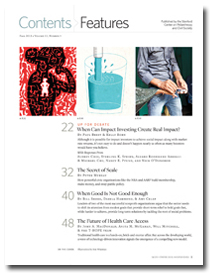 By some measures Share Our Strength and KaBOOM! were successful US nonprofits—growing rapidly, engaging numerous partners, and improving the lives of tens of millions of children. Yet all the while, the problems we were tackling—hunger and the lack of opportunities to play—were getting worse and even accelerating in recent years as the economy took a downturn. More than 16 million children in America now live in poverty, up from 11.6 million in 2000. We have witnessed how children who play on KaBOOM! playgrounds benefit physically, cognitively, socially, and emotionally, but we face the fact that one in three children is obese or overweight, and one in five suffers from a mental illness, with rates of depression higher than ever before. And the list goes on.

KaBOOM! and Share Our Strength realized that to make significant progress we had to move beyond simple solutions to complex problems, and we had to answer anew, in a much bolder way, the most critical question of all: “What does success look like?” Though it may seem counterintuitive for a non-profit sector already struggling to support, sustain, and scale up its impact—our approach calls for nonprofits to embrace a much heavier lift. We must look beyond short-term achievements that please funders, staff, and stakeholders but yield only incremental change, and instead hold ourselves accountable for the harder-to-achieve long-term outcomes that will ultimately solve social problems.

That is why KaBOOM! is committed to ensuring all children get the balance of active play they need to become healthy and successful adults. Together, we can give all kids the childhood they deserve.