What keeps Ed Barker coming back 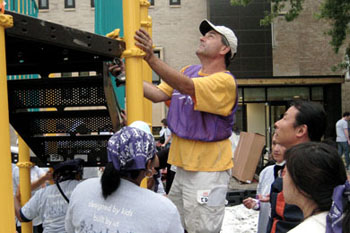 Update 8/29: When we last checked in with Ed Barker in April, he had recently completed his 50th playground build with KaBOOM!, but Ed certainly wasn’t satisfied with reaching the half-century mark. In only a few months, he added 10 builds to his tally and has now participated in an incredible 60 KaBOOM! playground builds!

Ed’s unwavering passion and determination to help give kids the childhood they deserve by bringing play to those who need it most also resulted in another milestone: the Points of Light Institute recognized his incredible commitment by naming Ed as the Daily Points of Light Award honoree on Aug. 29. Ed impressed the team at Points of Light so much that they even wrote this feature story about him!

Keep up the great work, Ed!

We always say that volunteering on a KaBOOM! playground build is a “feel-good” experience, and for Ed Barker (at right), that feeling has lasted not just for six hours, but for over six years. A self-described “KaBOOM! volunteer addict,” Ed recently participated in his 50th playground build. He has worked alongside more than 10,000 volunteers, bringing play to 27,500 children in need.

During volunteer appreciation month, we want to take a moment to honor Ed’s inspiring contributions to our cause, and to find out what keeps him coming back. Here’s what Ed has to say:

My real job is for Fannie Mae. I’m a Senior Account Manager – I visit banks, mortgage companies, and credit unions and buy up their loan portfolios. Fannie in turn will securitize all the collective purchases so they can provide capital for more home loans. It’s a circular community reinvestment, so we can put as many people in homes as possible.

That’s actually what attracted me most to the playground builds. What I do day to day, I visit the banks, visit the people in suits just like me, but I never get to see the smiles on the borrower’s faces as they sign the loan documents, or when the bank hands them the keys.

I do get to see that on the playground. The fulfillment piece comes at the very end, when you’re with the people you worked side by side with all day long. You see the smiles on their faces as they see what was accomplished and I especially enjoy the joy on the kids’ faces when they see their new playground. It sounds kind of corny, but it really is cool and validates all the hard work.

There are other benefits, too. I can’t tell you the number of times when I see people who are neighbors but who have never met one another, and who are friends by the end of the day. Really, it’s the playground creating a community rather than the community creating a playground.

The build that sticks out most in my memory is actually the first build I participated in. Fannie Mae was sponsoring five builds in one day in New Orleans the year after Katrina hit. Fannie put their sales meeting down in New Orleans so they could have half the company on site to build playgrounds.

Initially, my main goal for the trip was just to have fun, but I was curious what had really happened during the hurricane. I had a cab driver drive me around, and I couldn’t believe how humbling the destruction was. I had a nice hotel back in the French Quarter with all my creature comforts, and there was complete devastation 15 minutes away. The tone of my trip changed from, “I’m here to have fun” to, “I’m here to work and leave something that others are going to have fun on.”

I did work hard, but I had a blast too. The mulch pile must have been two stories high, and there was ridiculous humidity and heat, but I was up there dancing, having a great time. We even got done a half hour early! At the end of the day, the kids were there and I was collecting up tools wearing my silly Build Day hat, and one kids said, “I like your hat.” I said, “You can have it,” and he took out a coin that he had gotten from a Mardi Gras parade float and he said, “Then I want you to have this.” It meant a lot to him to carry it around in his pocket and yet he gave it to me.  It meant that much to me that he appreciated my effort that I still carry that coin around with me to this day.

I caught a bug on my first build. I wanted to have that feeling more often. Since then, I’ve been constantly seeking out if I can build a playground during business travel, or use my vacation time; it’s that fulfilling. I also get free T-shirts and hot dogs, so there are some side benefits, I can’t complain!

It’s all about making the world a little better, one playground at a time. I’ve been able influence others – not only coworkers, but some friends, my neighbors, even my family. I help out on Prep Day too, before the build, and they always want to know, “Why would you want to spend 10 hours one day digging holes, coming home covered in mud and stinking and then go right back out the next day?” But once I bring them to a build, they get it.

With each one of these builds, I’ve made at least one really good friend that I stay in touch with. I’m not great on social media but I’m good at picking up the phone and calling people. There are at least 30 people I keep in touch with, and I’ve gone back to some of the towns I’ve volunteered in to visit with them.

The last build I participated in, my 50th, was in one of the most dangerous neighborhoods of Chicago, with one of the highest per capita murder rates in the country. It made me think, “Why are teenagers shooting each other? How did it get like this?” It all starts at the childhood stage. They lost trust in their family, their neighbors, and their community. So you have to rebuild that trust and show them people care. The playground is just a piece of that.

As a volunteer, it gives you a good feeling when you drive past a playground and see kids and families. You see a mom sitting on a bench you helped build that wasn’t there before. It makes you feel good all over again.  Being a volunteer is also about rebuilding yourself – find your passion, find what drives you most to benefit others and throw your whole self into it.  When I look back on all the projects I have helped complete, I loved them all. But I am more excited about the ones I have yet to complete.